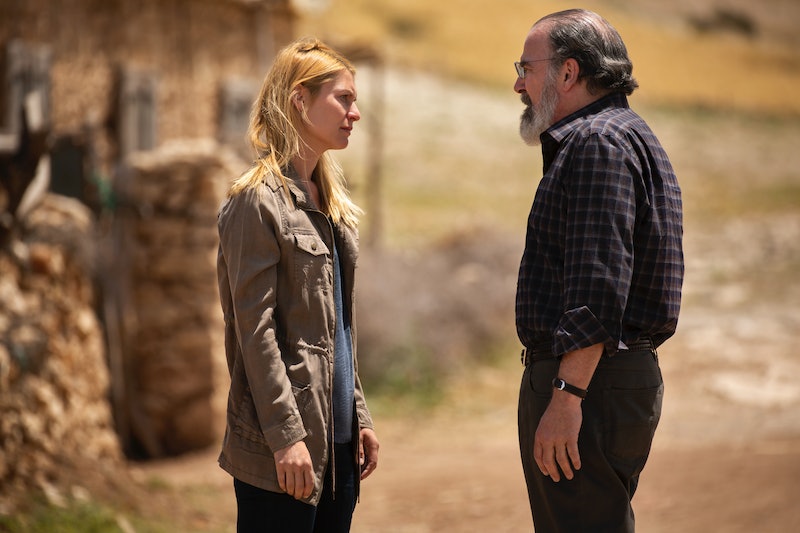 Homeland is finally coming to an end. The Showtime spy thriller first premiered in 2011 and for eight seasons has kept its audience guessing about who's loyal, who's not, and who could turn at any moment. The series, which revolves around CIA operative Carrie Matheson (Claire Danes), and her mentor, National Security Adviser Saul Berenson (Mandy Patinkin) took home a total of eight Primetime Emmy Awards during its run. But now Homeland won't return — and its stars know that the fans might not be satisfied by the finale.

In the final season, Carrie has returned from Russian prison after being detained for seven months. She doesn't know how much information she's given up, or if she's turned. Her situation now mirrors that of Nicholas Brody (Damien Lewis), the Al Qaeda prisoner of war whose own loyalty was questioned during the first few seasons.

"Carrie's kind of morphed into Brody,” Danes told USA Today. "She's definitely in a circumstance that's similar to where he was in the very beginning."

For Saul, his constant battle is that he must continue to sen Carrie into harm's way. "This young lady is his protégé, his hope for keeping the country and world a safe place," Patinkin says. "But he has put her at risk through the eight years and would do it again because of the possibility of how many millions she might be able to save versus the life of one."

The two leads themselves assure fans that the finale is some of the creative team's best work. As Patinkin told The Hollywood Reporter, "What [the showrunners] did, at least on paper, was the answer to my campaign and my wishes and my dreams and our conversations for the better part of almost nine years. And I’m sure it will come to fruition in a very on-the-edge-of-your-seat, non-sentimental, non-saccharine way, but a way that I care about."

Danes says that Carrie is "pretty high up there" among her favorite roles. "[Carrie] is dynamic, powerful and resonant, and I will really miss her. She's kind of a superhero, wildly capable in her dysfunctional way."

She does know, however, that like with any series end, not everyone will be satisfied. "It’s kind of an impossible undertaking and I think it's inevitable that people are going to be frustrated and probably infuriated," she admitted. "But look, it's sad that it’s ending. There’s always going to be that resentment there, too. Everyone is going to, even unconsciously, have formed their own theories about what they want it to be. But I think we try to honor our characters and the nature of the show the best we could and hopefully, by extension, the audience."