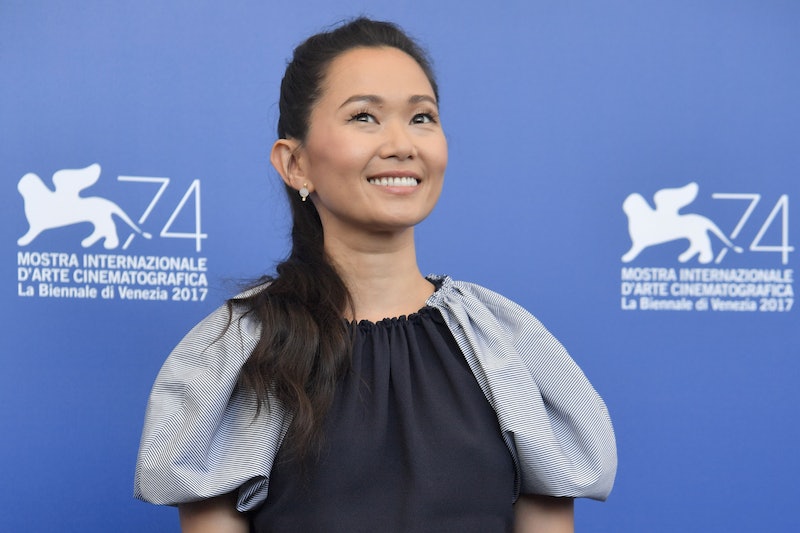 In the new dramedy Downsizing, progatonist Paul Safranek (Matt Damon) first meets Ngoc Lan Tran (Hong Chau) when she arrives to clean his eccentric neighbor's apartment. As the only major character of color in Downsizing, Ngoc Lan is introduced as a complete stereotype: an Asian immigrant cleaner who speaks with a heavy accent. And yet, over the course of Alexander Payne's film, Ngoc Lan not only eclipses the stereotype, but becomes the true heart of the movie. And this is due in no small part to Chau, who tells Bustle that she refused to let her Downsizing character be reduced to a caricature of an Asian immigrant.

Instead of actively trying to combat the role's stereotypical introduction of Ngoc Lan by lessening the accent or toning down her abrupt delivery (both of which could be interpreted as being played for laughs), Chau, an immigrant herself, says she leaned into the role. "I'm more interested in broadening what good representations of Asians is rather than narrowing it," the actor tells Bustle, speaking over the phone. "I don't want to somehow criminalize Asian characters with accents. I don't want them to be put in a ghetto in the name of progress, because that doesn't seem like progress to me."

The role of Ngoc Lan, a political refugee from Vietnam with an amputated foot and broken English, is undeniably vulnerable to accusations of racism. Some early reviews have been critical of the character, with ScreenCrush's E. Oliver Whitney describing her as an "icky, racist caricature," and Roger Ebert's Brian Tallerico labeling the film "casually racist." And it is true that Hollywood has a long history of making Asian immigrants the butt of the joke — just look at the classic Breakfast at Tiffany's, for instance. But despite knowing the potential for criticism to be lobbied her way, Chau didn't change a thing about how she approached the character.

"For me, the possibility of white people quoting my character and possibly doing the accent isn't really enough of a reason for me to not perform the character fully," the actor explains. Nor, she adds, is it a reason "for well-meaning audiences to be worried when they first see my character appear on screen."

Chau's view is backed by her character's arc in Downsizing, which consists of far more than just that one scene where Ngoc Lan cleans an apartment (though it is worth noting that her co-workers, also played by Asian women, do that throughout the film). She is a fully fleshed out character, with her ethnicity playing central role. Her identity defines her, but not as a stereotype; although stories about characters with accents, or that are specifically defined by a character's ethnicity, can be viewed as limiting characters of color instead of representing them, Downsizing takes the opposite approach. Chau busts a stereotype by embracing it, and then taking it a few levels deeper.

With so few characters of color presented on screen in any given year, the fear, for many, is that if there is only one prominent Asian role in a film, and that role checks the stereotype of the Asian immigrant, then it perpetuates the "Fresh Off The Boat" stereotype. However, Chau was not scared off by the idea that her character might be initially put into a box — she simply wanted to take on a meaty role.

Chau clearly doesn't want to be defined by her ethnicity, but she also isn't afraid to incorporate it into her identity, either. It's a tricky line to walk, especially in Hollywood, an industry that, all too often, prefers to see people in their simplest forms. But with a little luck and more good projects ahead, Chau will most certainly continue to break apart stereotypes by thinking outside the box.

More like this
In 'The White Lotus,' Leo Woodall Gets His Moment
By Gabrielle Bondi
Elizabeth Debicki On Her Approach To The Most Debated Scene From 'The Crown'
By Grace Wehniainen
Melissa Barrera On Anxiety, Aloe Vera & Finding Self-Love
By Brittany Leitner
Yes, That's Lindsay Lohan's Sister Singing In The 'Falling For Christmas' Movie
By Radhika Menon
Get Even More From Bustle — Sign Up For The Newsletter