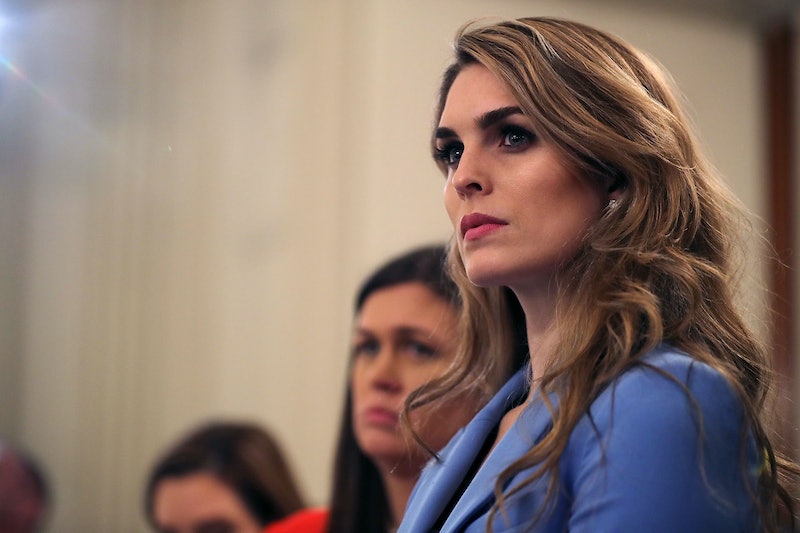 The so-called "Trump whisperer" left the White House way back in March, but now she's landed on her feet — atop one of President Donald Trump's favorite companies. On Monday, media insiders reported that Hope Hicks got a job with FOX, the company to be spun off from 21st Century Fox during the merger with The Walt Disney Company.

FOX will be home to Fox News, Fox Sports, and the broadcast television network. Hicks will serve as EVP and chief communications officer, the company confirmed in a press release. Hicks will be based in Los Angeles and start when the Disney merger closes and FOX becomes its own company.

She was hired by FOX Chief Legal and Policy Officer Viet Dinh, who will be her boss. Danny O’Brien, currently at GE Transportation, was also named as the future EVP and head of government relations. "Hope and Danny are proven leaders and world-class public affairs professionals. Together they will define and project FOX’s voice to our relevant communities," Dinh said in the company statement.

The last news regarding Hicks' plans for employment came months back. Page Six reported in July that Hicks was in New York City looking for a job after having spent time with her family in Connecticut.

Just before Hicks left the White House, she gave almost nine hours of testimony to the House Intelligence Committee with regards to the Russia investigation. Hicks was on the plane when Trump drafted a message in response to news breaking about the Russia meeting at Trump Tower during the campaign season. She didn't answer anything about the drafting of the message, reportedly, but did acknowledge telling white lies for Trump.

Despite this, Trump and Hicks parted on good terms. "Hope is outstanding and has done great work for the last three years,” the president said in a statement when Hicks resigned. "She is as smart and thoughtful as they come, a truly great person. I will miss having her by my side, but when she approached me about pursuing other opportunities, I totally understood. I am sure we will work together again in the future."

Hicks also released a positive statement at the time. “There are no words to adequately express my gratitude to President Trump. I wish the President and his administration the very best as he continues to lead our country,” Hicks said in a statement issued by the White House.

White House Press Secretary Sarah Huckabee Sanders said on Twitter that the new company is lucky to have her old co-worker. "FOX won’t find anyone smarter or more talented than Hope Hicks," Sanders posted. "So happy for my friend. They are beyond lucky to have you and the East Coast misses you already."

The Disney-21st Century Fox deal has advanced quickly, with shareholders voting to approve the deal in July. It had already received regulatory approval, which helped seal the deal even though Comcast had put in another offer for 21st Century Fox.

Hicks is expected to work closely with Lachlan Murdoch, Rupert Murdoch's son who will be CEO of the new FOX company.