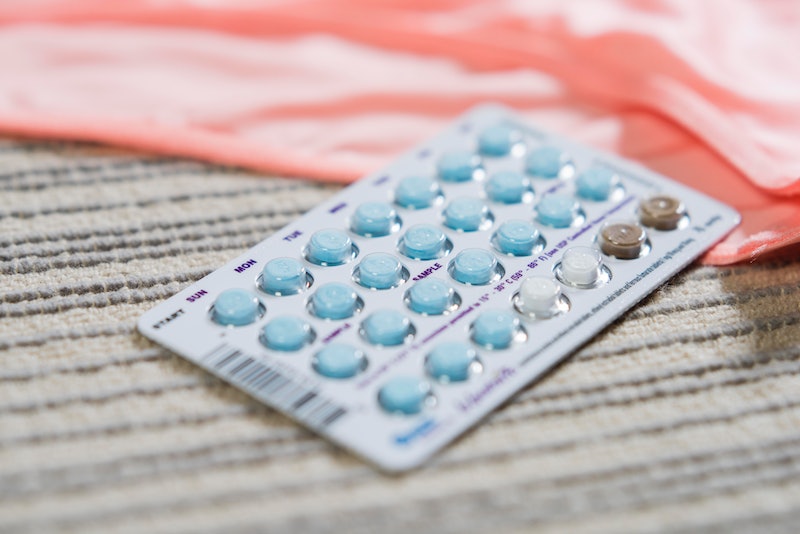 There’s so much to consider when you're choosing a birth control, to how long you want to prevent pregnancy for to the side effects. While some women prefer the Pill, others prefer not having to take a pill every day and getting an intrauterine device (IUD) instead. And a big determining factor for certain women is also whether or not hormonal birth control will cause changes in mood. But, a new study has found that hormonal birth control may not lead to depression. In the past, other studies found the opposite to be true: That hormonal birth control may lead to depression. One such study was done by JAMA Psychiatry from 2000 to 2013. They researched more than one million women in Denmark aged 15 to 34 to see if “the use of hormonal contraception is positively associated with subsequent use of antidepressants and a diagnosis of depression at a psychiatric hospital” — and found that some hormonal contraceptives were linked to an increased risk of depression, mainly among adolescents versus women 20-34.

The latest study, “The relationship between progestin hormonal contraception and depression: A systematic review,” was published in the journal Contraception and authored by Brett Worly, MD, Tamar L Gur, MD, and Jonathan Schaffir, MD. The researchers found no evidence to support the link between hormonal contraceptives (including injections, implants, and pills) and depression. They also looked at the effects of hormonal birth control on postpartum women, adolescents, and depressed women, and came to the same conclusion.

“As an OB/GYN physician, I see postpartum women, depressed patients, and adolescents, and I try to keep up with the literature in a rolling fashion, where I read papers as they get published,” Dr. Brett Worly, assistant professor of obstetrics and gynecology at The Ohio State University Wexner Medical Center, who lead the study, tells Bustle. “As different papers have been published, there has been a pendulum swing one way or the other, both in favor and against the link between depression and progestin-only contraception. I was not sure what to expect when I started work on this project, but once I tackled all of these papers and thoroughly assessed their merits, I was not surprised to find similar results for these different groups of women.”

How The Research Was Conducted

To uncover their research, Worly and his team reviewed thousands of studies on the mental health effects of contraceptives, and they included data tied to various contraception methods — including injections, implants, and pills. To do so, they did a systematic review to look for an association between progestin-only contraception and depression. They searched PubMed, Ovid, and Web of Science for English language articles, including progestin-only contraception and depression, beginning from when the databases were started to September 2016. They then focused on externally validated measures and did not include case studies, review articles, and other psychiatric disorders.

The doctors identified 26 studies that met their criteria. “We found minimal association between progestin-only 41 methods and depression,” the doctors stated in their paper. “I was not sure what I would find,” Dr. Worly says. “I knew that there were reports suggesting a link between depression, and others showing no link at all. It was really helpful to me to sit down with the primary literature, sort it out in a thoughtful way, and do my best to come to conclusions about the entire body of data. I would not say I was surprised by the results, but I can say that I was not sure what to expect when I started working on this project.”

What This Means For Women Who Use Hormonal Birth Control

According to the Wexner Medical Center, most women have tried at least one method of contraception in their lives, with nearly 37 million women in the United States currently using birth control. As for what kind women are using, 67 percent of current users have chosen a non-permanent hormonal method, which includes an oral pill. However, among those, 30 percent have stopped because of dissatisfaction with potential side effects. “We live in a media-savvy age where if one or a few people have severe side effects, all of a sudden, that gets amplified to every single person,” Dr. Worly said in a press release announcing his findings. “The biggest misconception is that birth control leads to depression. For most patients, that’s just not the case.” So, suffice it to say, the research by Dr. Worly et al is great news.

“I think this paper is really helpful for women in equipoise, who are not sure what to do in regards to progestin-only contraception,” Dr. Worly says. “Many of us know friends or family members who claim that one thing or another caused a particular health problem, and I think this paper really sorts through the best evidence possible and answers the question about depression and progestin-only contraception.”

There’s More Research To Be Done

“There is still ample room for high-quality research to be performed to get better answers,” Dr. Worly says. “While my paper attempts to sum up decades of research regarding the question about progestin-only contraception and depression, this is not the end of the conversation. More evidence will hopefully come soon, as science and medicine continue to grapple with this issue with new trials and better ways to assess the data that we have. I look forward to getting my hands on these future studies and evaluating their merits.” I am sure women who take birth control look forward to future studies, too. Of course, however, since no contraceptive method affects two women the same way, if you do experience mood changes or other side effects while on birth control, it’s always best to consult your medical practitioner.