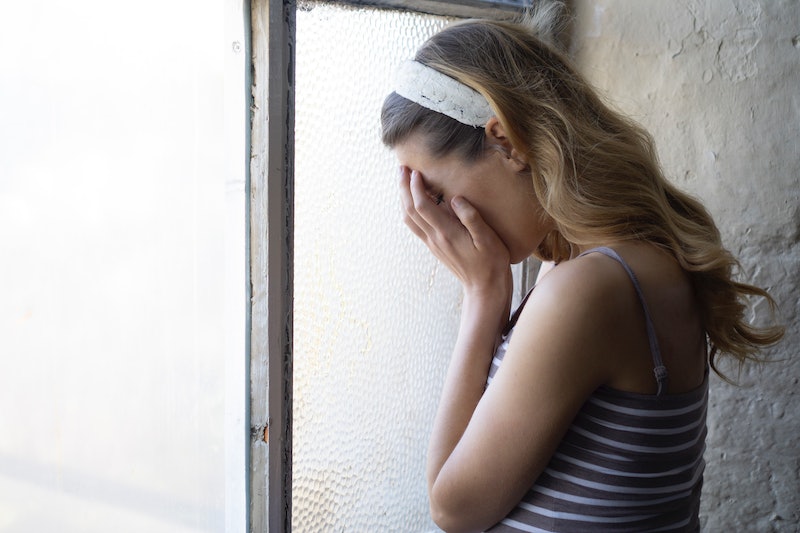 If you’ve recently started a new hormonal birth control and have been feeling depressed, the two may be related, according to a major new study by JAMA Psychiatry, reported The Huffington Post. They researched over one million women in Denmark to see if “the use of hormonal contraception is positively associated with subsequent use of antidepressants and a diagnosis of depression at a psychiatric hospital.” The results? Some hormonal contraceptives are linked to an increased risk of depression, particularly among adolescents — they were affected more so than 20- to 34-year-olds, the research found. It's a significant discovery. I’m sure no one wants to feel depressed as a result of taking birth control.

“Oral contraception or ‘The Pill’ is still the most popular method of birth control in the United States,” Sherry Ross, MD, OB/GYN and Women’s Health Expert at Providence Saint John’s Health Center in Santa Monica, CA, tells Bustle. “For many, it’s a girl’s best friend! It has many health benefits — in addition to being a great birth control, one of the most helpful, popular, and safe side effects is its ability to suppress or stop your period each month. For women suffering from debilitating menstrual cramps, premenstrual syndrome (PMS), hormonal migraines, irregular periods, anemia or pain associated with endometriosis, there is a real benefit from stopping your period each month.”

The study tracked women’s prescriptions and diagnoses to see who filled prescriptions for hormonal birth control, and then to see who later received antidepressants or a depression diagnosis. Interesting, huh? Fifty-five percent of the teens and women studied were either current or recent users of hormonal contraception, including birth control pills, hormonal IUDs, the patch, or the vaginal ring. Among women who used the combined birth control pill — i.e., a mix of estrogen and progestin — they had a 1.23 times higher relative risk of being prescribed antidepressants for the first time versus those on progestin-only pills, who had a 1.34 times higher relative risk.

“Hormones certainly can affect mood,” Dr. Michael Krychman, Executive Director of the Southern California Center for Sexual Health and Survivorship Medicine, and co-author of The Sexual Spark: 20 Essential Exercises to Reignite the Passion , tells Bustle. “Some women are very sensitive to progesterone, and it may precipitate changes in mood and certainly cause lowered mood or even depression.”

But Don't Freak Out Just Yet

So, What Should Women Do About This?

“Monitor your symptoms,” Dr. Krychman says. “Some contraceptives cause decline in testosterone, too, which may also impact mood. Know your own body and how you react. Usually, the symptoms are temporal, meaning you start the contraception and, within a few weeks, you notice some changes in mood. Talk to your health care practitioner, get advice, and discuss all your options. You may need to change contraceptive choices.”

Here’s a closer look at some of the findings from the study, courtesy of JAMA Psychiatry. In the chart, use of most kinds of hormonal contraceptives is compared with nonuse, among women 15 to 34. Note: IUS stands for intrauterine system.