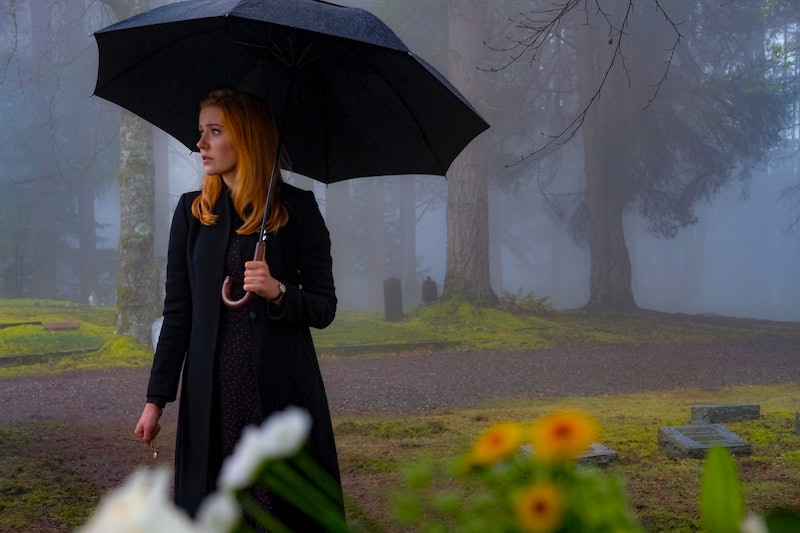 In the CW's Nancy Drew, the foggy, mysterious town of Horseshoe Bay, Maine is almost as much of a character as Nancy herself is. Quaint yet foreboding, and likely hiding an ominous secret, Horseshoe Bay is reminiscent of Riverdale's namesake town or the Chilling Adventures of Sabrina's Greendale. Like both those towns, Horseshoe Bay is not a real place — but the lore of Maine that the show draws from for it's spooky, supernatural aesthetic is very real.

There is definitely more to Horseshoe Bay than meets the eye. The Nancy Drew trailer reveals that Horseshoe Bay is reportedly haunted by the ghost of Lucy Sable, a young woman who was prom queen (dubbed "Sea Queen") for just one night before she fell off Maine's steep cliffs and plunged into the frigid water below. Whether she jumped or was pushed is a mystery Nancy will have to solve, but there's something uniquely New England about the tale of Lucy.

"Some places are more frightening than others ... some places have a way of getting under your skin," Aaron Mahnke narrates in his Lore podcast Maine-centric episode "The Big Chill." In the episode, Mahnke talks about Maine's vast coastlines (3500 miles), it's jagged rocks, ancient lighthouses, and freezing temperatures that have all contributed to tales of tragic deaths. "The sea is cruel, and the weather is deadly. It's often there that odd things happen," Mahnke explains in the opening.

Mahnke says that the state of Maine itself has become something of a supernatural preoccupation for many people, thanks largely to the writing of horror novelist Stephen King. King, who grew up in Durham, Maine and now lives in Bangor, Maine, has set his most famous novels in his state, with many of them drawing inspiration from Bangor, specifically. Derry from It, for example, is a fictional place, but King used much of the real history of Bangor to create Derry's backdrop. The dense, foggy forests of Salem's Lot and Pet Sematary are also located in Maine.

The state's vast wilderness is already plenty scary on its own, and King's profound effect on pop culture means any town set in Maine, fictional or not, is going to carry some connotation of the surreal or supernatural. For what it's worth, Maine seems to be enjoying the paranormal attention, and there's even an active "Maine Ghost Stories" section in the Bangor Daily News. If anything, Nancy Drew setting its tale in Maine is a suitable homage to one of the world's most prolific horror writers, which is fitting for this new horror-tinged iteration.

And though Horseshoe Bay isn't a place curious fans can literally visit — it's filmed in Vancouver like many other CW shows — the benefit of Nancy Drew drawing from King's home state is that there's likely plenty of ghost-themed tours that one can hop on to get a close approximation of what it feels like to be Nancy Drew in the creepy, coastal, town being haunted by Lucy Sable and who knows how many other ghosts.

More like this
Olivia Colman Stars In First-Look Trailer For BBC's 'Great Expectations'
By Sabah Hussain and Sam Ramsden
Netflix Shut Down 'Bridgerton' S3 Rumours About A “Very Dark” Storyline
By Bustle
Everything To Know About The 'Daisy Jones & The Six' TV Series
By Maxine Harrison and Brad Witter
The 'Gossip Girl' Reboot Creator Is “Looking For A New Home” To Air A Potential Season 3
By Brad Witter
Get Even More From Bustle — Sign Up For The Newsletter
From hair trends to relationship advice, our daily newsletter has everything you need to sound like a person who’s on TikTok, even if you aren’t.