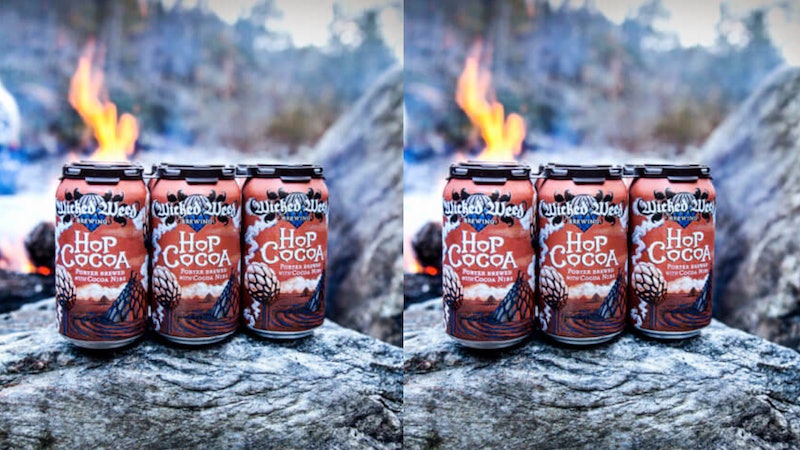 It’s 2018 and we’ve got everything: bagels that look like rainbows, ducks inside of chickens inside of turkeys, and now we’ve got hot cocoa-flavored beer. It’s beer that tastes like hot chocolate; what more do you need during the holiday season? (I mean, technically it tastes like chilled hot cocoa on account of beer being cold...but you get the idea.)

Wicked Weed Brewing is to thank for your newfound seasonal obsession. The Asheville, North Carolina-based brewing company has brought back their the aptly named seasonal beer Hop Cocoa. It’s “a smooth porter” that combines chocolate with their Wicked Weed-style dark beer. “Roasted cocoa nibs combine with bright, citrusy hops to create a silky-smooth balance of bright hops and indulgent chocolate,” the product listing for the beer states. As 6.5 percent ABV, it’s also a decently boozy beer. Basically, you’ll want to sip with a little discretion lest you end up gathering your family ‘round the fire and reenacting the entirety of The Princess Switch. On second thought, that sounds like the perfect way to spend the holiday season.

What goes better with hot cocoa than cookies? And what goes better with beer than even more beer? Wicked Weed also offers two different kind of Milk & Cookies flavored beer: an imperial milk stout and a bourbon barrel-aged milk stout. The imperial milk stout has “hints of cold milk, sweet vanilla, and hearty oatmeal remind us that our memories are forever led by our senses.” It’s nostalgic! It’s home-y! It’s beer that tastes like cookies! The bourbon barrel-aged milk tout specifically has notes of “golden raisins, cinnamon, and vanilla.” Basically, it’s like an oatmeal cookie and a beer had a baby you can drink. Amazing.

There’s also a French Toast imperial stout if you’re look for something particularly brunch-y. “This robust, dark stout is finely complemented by zesty cinnamon, smooth vanilla, and the comforting sweetness of only the best maple syrup,” the product description reads. Beer and french toast is the food combination you never knew you needed.

Unfortunately for those of us not located in the greater Asheville-area, it looks like Wicked Weed’s beer is most readily available locally. “Currently, our focus is brewing and packaging our fresh beer to send to North Carolina and surrounding markets with future plans to expand the facility to include tours and a tasting room,” Wicked Weed’s website states.

If you are located in North Carolina or are looking for a road trip, you should definitely check out the Funkatorium, if for no other reason than it’s called the “Funkatorium.” The location touts itself as “the East Coast’s first sour and funky beer dedicated taproom.” So, if sour beers and wonderfully-named taprooms are your thing, there you go.

There are locally-based alternatives if you’re looking for a hot chocolate-inspired beer near you. If you’re in Denver, there’s Copper Kettle Brewing Company’s Mexican Hot Chocolate stout. Down The Road Beer Co. in Boston has a Hot Cocoa Porter brand new for the season. If you want to get real wild with it, you could even make your own beer-infused hot chocolate. However, some of the alcohol will cook off in the process of heating it up.

Or you could always take the easiest, most accessible route: alternate sips of beer and hot cocoa. Cheers, fellow chocolate beer fiends!