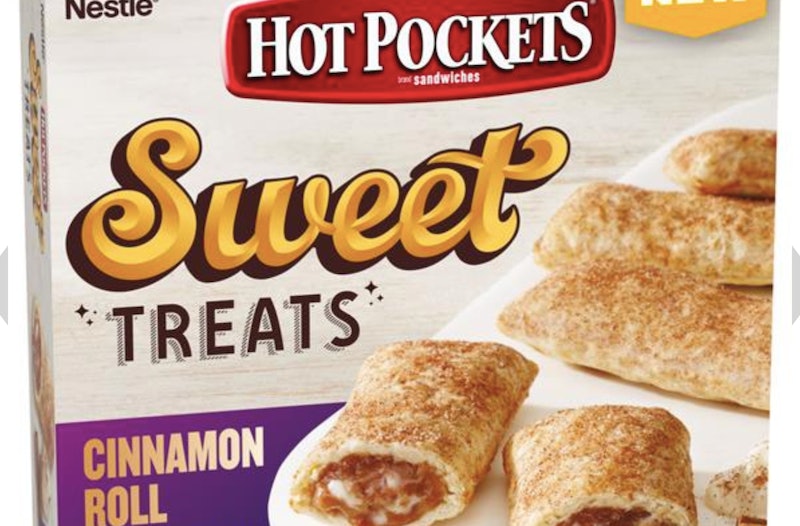 I’ll admit that Hot Pockets have never been my grocery store freezer pastry of choice (that honor goes to the mighty Pillsbury Toaster Strudel) — but there’s a new Hot Pocket in town that might change my opinion: Hot Pockets Sweet Treats have arrived. Coming in two cinnamon-centric flavors — Apple Cinnamon and Cinnamon Roll — they’ve recently been spotted on shelves of a few different retailers; it’s not currently known how widely they’ll be released, or when, but we can only hope they spread further as time goes on. Because, I mean, who hasn’t ever wished they had a warm miniature pie all to themselves without, y’know, having to actually go make a pie?

The creation of siblings Paul and David Merage, Hot Pockets have been on the scene since 1983. For decades, though, they’ve focused on savory options, with flavors ranging from classic Pepperoni Pizza to the more creative Buffalo-Style Chicken. The new Sweet Treats therefore represent quite a departure from the standard Hot Pocket formula, offering, well, a sweet treat instead of a savory snack or meal.

Whereas regular Hot Pockets are more like a calzone or a stromboli, Hot Pockets Sweet Treats resemble nothing so much as hand pies. Each flavor consists of a “cinnamon crust,” as the label describes it — my assumption is that it’s a flaky sort of pastry dusted with cinnamon — with some sort of filling, also heavy on the cinnamon, inside. The Apple Cinnamon flavor appears to be particularly pie-like; the “apple cinnamon filling” looks exactly like apple pie filling. Indeed, The Impulsive Buy wondered whether deep-frying an Apple Cinnamon Sweet Treat might result in something similar to the fabled Fried Apple Pie once available at McDonald’s. (McDonald’s fried their apple pies until 1992, at which point the fast food joint started baking them instead.)

The Cinnamon Roll flavor, however, is by far the more spectacular of the two varieties; its interior boasts a “sweet cream cheese filling” that looks kind of like what might happen if you combined the mix of brown sugar and cinnamon one typically finds wrapped up between the layers of a cinnamon roll with the cream cheese icing that usually adorns the top of the roll in huge bowl and just… dolloped huge spoonfuls of it into the middle of a turnover or something. I’ve no doubt it’s absurdly sweet — but, I mean, hey, if absurdly sweet is your jam, then this little freezer pastry will likely float your proverbial boat in a big way.

Like all Hot Pockets, Sweet Treats can be cooked simply by heating them up in the microwave on high for about a minute, then letting them sit for an additional minute or two before you chomp down on them. If you’re feeling really dedicated, though, you can also make them in an actual oven; just preheat it to 350 degrees Fahrenheit, pop the pastries on a baking sheet, and bake them for around 17 minutes. It takes longer, but it results in a crispier pastry.

According to the Impulsive Buy, Hot Pockets Sweet Treats have so far been seen at Hy-Vee, which serves the Midwestern United States; additionally, the item’s Instacart page notes that they can be found at Karns Quality Foods, which serves the area of Pennsylvania around Harrisburg, and Grove City County Market, also in Pennsylvania. Both the Apple Cinnamon and Cinnamon Roll flavors run about $2.99 per four-count box, per The Impulsive Buy. As is the case with pretty much all Hot Pockets, you’ll find them in the freezer section. Happy munching!