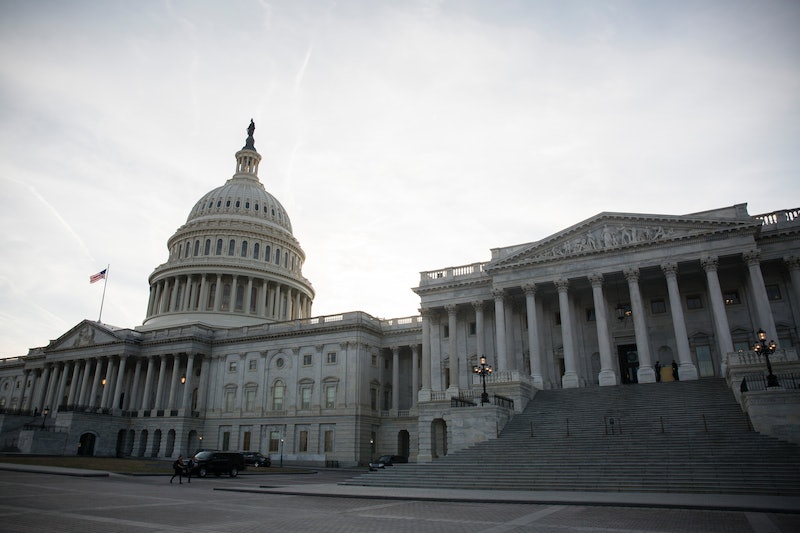 The way Capitol Hill handles harassment complaints could soon become much more transparent and effective. On Thursday, the House Administration Committee voted to codify anti-harassment regulations for all House offices. Within a 60-day timeline, each office has to create and implement policies that would curb harassment and discrimination at their workplace, according to Roll Call.

The committee gave lawmakers a model policy that they can follow to craft their own office's anti-harassment policies. It contains concrete vows like "the office of [lawmaker's name] is firmly committed to ensuring that all employees, interns, detailees, and fellows work in an environment free from discrimination, harassment, or intimidation" based on their racial background, sexual orientation, gender identity, age, disability status, and more.

Roll Call reported that the committee also mandated that House offices display a statement on employee rights and protections somewhere in each House office, where workers, paid and unpaid interns, and others can easily see it. On top of that, the office will need to include contact details for employees in case they have any questions.

The pressure was enough to compel the introduction of legislative pieces like the Member and Employee Training and Oversight On (ME TOO) Congress Act in 2017, which was led by California Rep. Jackie Speier and New York Sen. Kirsten Gillibrand, both of the Democratic Party.

In 2017, another bipartisan bill, led by Minnesota Democratic Sen. Amy Klobuchar and co-signed by former House Speaker Paul Ryan, made sexual harassment training compulsory for House members. At the time, Klobuchar said that employees had the right to "feel safe and comfortable at work." Klobuchar brought up a similar resolution on mandatory sexual harassment training for Senate members.

Plus, senators like Gillibrand have lambasted the Office of Compliance's system for handling harassment claims, telling The New York Times in 2017 that it was "archaic and, frankly, bizarre rules" and had a discouraging effect on the people who wanted to ring the alarm on workplace harassment.

The new move introduced by the House Administration Committee could tackle the aforementioned issues as far as harassment training, approaching alleged violations of these policies, and conducting fair investigations are concerned. Members will have to acknowledge, in writing, that they have understood and accepted the newly-developed and implemented policies.

The model policy puts strong emphasis on accountability, too. House offices will have to approach harassment and discrimination complaints by carrying out a "fair, timely, and thorough investigation," according to the sheet. The guidelines also urge House members to "be fair to all employees with respect to the scope and manner of the investigation," which includes both the accuser and accused individual.

Perhaps one of the most critical features of the House Administration Committee's model policy is that it prohibits retaliation against and silencing of a person who brings up a harassment claim. House members cannot penalize a person for making "an objectively reasonable good faith complaint, or for objectively reasonable good faith participation in an investigation." These regulations may just change the culture on Capitol Hill for the better.