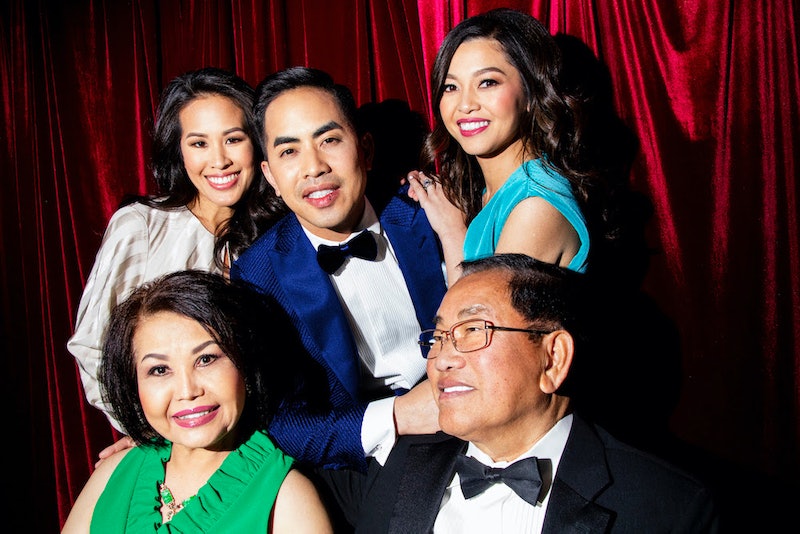 Eleanor Young will be oh so pleased: HBO Max's The House Of Ho, the Crazy Rich Asians-inspired comedy docuseries, officially has a premiere date. Ahead of its May 27 launch date, the streamer service announced a second wave of original programs on May 13 that include scripted series, documentaries, and film features. Among the buzzworthy new titles? The House of Ho, set to debut on July 16.

The House of Ho is a multigenerational family docusoap that chronicles the lives of a wealthy Vietnamese-American family in Houston, Texas. Led by patriarch Binh Ho and his wife Hue Ho — two immigrants from Vietnam who’ve built a multi-million empire and seem to be living the height of the American Dream — the half-hour comedy will explore their lavish lifestyles and the drama that ensues as their two adult children, Judy and Washington, attempt to live up to their parents’ expectations. And those expectations are bound to be sky high, and, hopefully, result in a ton of entertaining drama.

Other supporting characters in The House of Ho include Lesley Ho, Washington’s wife and an independent mother of two, Aunt Tina, an eccentric relative who rocks purple streaks in her hair, and Cousin Sammy, a young adult who lives in the moment, per an initial report.

“Rarely do you come across a family that is so rich in so many ways – not just in wealth, but in heart, traditions and love for each other,” Jennifer O’Connell, executive vice president of original non-fiction and kids programming at HBO Max, said in the series’ initial announcement last October. “There’s great pride in being a Ho and they are ready to give the world a seat at their luxurious table.”

More like this
Here’s Everything Coming To & Leaving Netflix In October
By Jake Viswanath
What’s New On Netflix: Ana De Armas’ 'Blonde' & A Nick Kroll Special
By Arya Roshanian
Where Is Armie Hammer’s Ex-Wife Elizabeth Chambers Now After 'House Of Hammer'?
By Grace Wehniainen and Radhika Menon
How To Stream 'Pretty Wild'
By Arya Roshanian
Get Even More From Bustle — Sign Up For The Newsletter