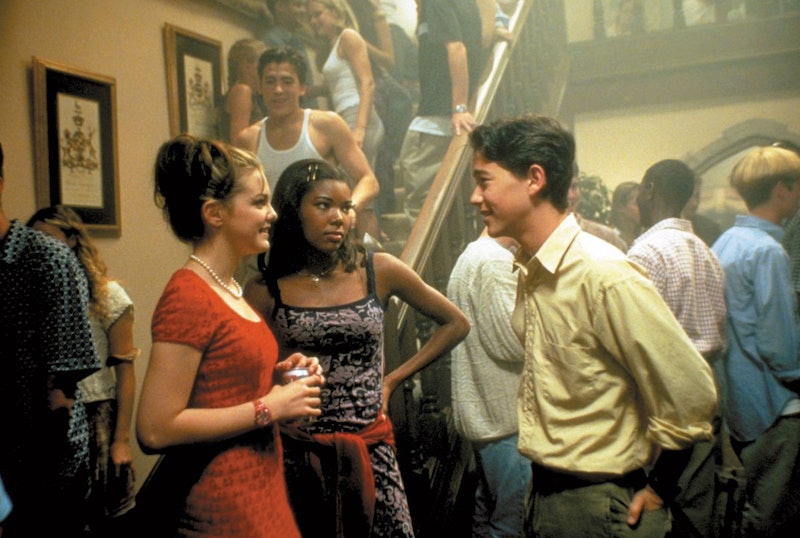 "What’s a Bogey Lowenstein?" On the 20th anniversary of 10 Things I Hate About You, fans are happy to remind Katarina and Bianca Stratford’s dad and anyone else who will listen who, not what, he is. Bogey, of course, is the high school senior with the name and wardrobe of a golf pro who unwittingly became the host of Padua High School’s party of the year, all thanks to his supposed disparaging remarks about Michael buying his Izods at an outlet mall. Now two decades after that quaint wine and cheese soirée unexpectedly turned into a rager for the ages, Bustle has put together an oral history of 10 Things' Bogey Lowenstein’s party.

Nigel may have had the brie, but we’ve got the tea on this epic teen party filled with impressive dance moves and stunning digestive pyrotechnics, both courtesy of Julia Stiles’ iconic character Kat. Unfortunately, there are no sheep, but this oral history does have a bit of intel from those who were there: 10 Things' co-writer Kirsten “Kiwi” Smith, director Gil Junger, and stars Larisa Oleynik, Andrew Keegan, and Bogey Lowenstein himself, Kyle Cease.

Getting The Party Started

10 Things I Hate About You was filmed in Tacoma, Washington, and Bogey’s house was right off the Puget Sound, which made for a fun week of filming — especially since producer Andrew Lazar’s rental house came with a speed boat.

Gil Junger (director): A bathing suit, flip flops, and a T-shirt, that’s what I wore to work. I had three water skis on the back of the speedboat I took to work and we’d all go water skiing until they would call me to go back to set. I was soaking wet. It was so much fun shooting that party.

Andrew Keegan ("Joey Donner"): They did have jet skis and a boat. I didn’t get invited and I’m still a little sore about that. I don’t know if Gil told you, but he had a Ferrari, a green Ferrari that he had shipped up. I think Heath [Ledger] got to drive it. Again, I’m a little sore I never got the keys to the Ferrari.

Kyle Cease ("Bogey Lowenstein"): [The car] is what I remember. It was a [Ferrari] Spider, it was green, it was a convertible. First of all, no one was allowed to park anywhere near set, and the director drives the green car right up to the garage door of the house and gets out. That Ferris Bueller “chickachicka” song should have been playing. He came out in sunglasses with a cigar. It was the most Hollywood moment ever.

10 Things was the first film for many of its cast members, including comedian and motivational speaker Cease, who may have been born to play Bogey.

Cease: Quite a bit of the corniness and the cheesiness of Bogey Lowenstein came from this kind of lounge lizardy character that I created in my standup. I just walked into the [10 Things] audition winking and pointing at the director like I was a gameshow host. I did this kind of cheesy laugh after each line. I do remember having to take a month of golf lessons. I had a professional golfer teach me how to chip for a month. I had to see him three days a week for one shot.

Kirsten "Kiwi" Smith (co-writer): It's just really cool that Kyle's got his own alternate Bogey Lowenstein-type life as a motivational speaker, leading a community that he created.

Junger’s goal was to make Bogey’s party feel as real as possible and to do that it took a lot of choreography. But it turns out Julia Stiles’ impromptu dance number to Notorious B.I.G.’s “Hypnotize,” well, not so much.

Junger: At that time, I was, shall we say, very good friends with Paula Abdul. I booked her to choreograph it so I say to Julia, “Paula will do us a favor and choreograph that number.” I thought she was going to go, “Oh my god that’s so cool!” She looked at me without bragging, “No I can dance, I got this.” Here I am offering one of the hottest choreographers at the time and she says, “No, I got this.” She said it with so much confidence, I totally believed her. I think we settled on that song pretty quickly. If I’m not mistaken, I think it was Julia’s request.

Smith: There’s [a] conversation about exotic dancers and how their dancing is kind of a reclamation of women in power. In a way, [Kat’s table dance] is a feminist act on a lot of levels.

Larisa Oleynik ("Bianca Stratford"): It is deeply feminist. We have to appreciate that, don’t we? How lucky was I to be with these writers and Julia, who I really looked up to even though we were the same age. Listen, I went to Sarah Lawrence because of that movie. Kiwi and Karen take full credit for it. I wanted to be Kat Stratford, too, so I went to Sarah Lawrence and I read a lot of Sylvia Plath.

Like Kat’s dance, the kiss between Bianca and Cameron (Joseph Gordon-Levitt) in the car after Bogey’s party goes south was also unchoreographed.

Oleynik: We’d rehearsed the scene, but when it came to the kiss, I think I was the immature one who was like, “Whatever, we’ll just figure it out on the day” because I was scared sh*tless. And then I really laid one on him. I wasn’t mad about it at all! Who wouldn’t kiss that cute little face? And my goodness, for a high school movie this is very sexy, right? The chemistry is so real.

Keegan's inspiration for his modeling scenes during the party was as '90s as it gets.

Keegan: Marky Mark was a big deal back then, so I came at it with a Marky Mark kind of modeling mentality. As I was watching it now though, it comes off a little more Fabio.

Ledger’s scenes at Bogey’s party — including the one in which Patrick gives Cameron a wise, beyond-his-years pep talk — still stand to those who knew the late actor, who died in 2008.

Oleynik: That actually is very much of his essence. He sort of had an otherworldly maturity like he had things to let us know.

Keegan: The way he sincerely delivered [that talk] was a memory that I have of Heath talking to me. It really reminds me of him just grabbing you by the shoulders and straight talking with you. I think in this film specifically he was so much of himself. I don’t want to say watching it breaks my heart, but it certainly makes you miss your friend, the really talented actor that he was and still is, as he lives on in his films.

Twenty years later, fans aren't close to hating what this pivotal scene meant to 10 Things I Hate About You – not even close, not even a little bit, not even at all.