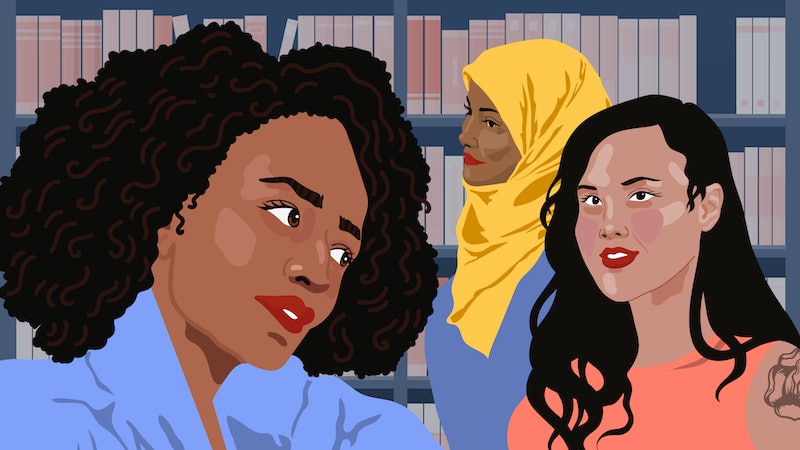 After seven years of teaching, Bunmi Ishola decided to take a leap in 2018 and put all of her savings toward a new career in books.

At the age of 33, Ishola now works as an editorial assistant for the children's books section at an independent publisher in Chicago, Illinois. She’s one of few women of color in publishing, an industry that Ishola says allows her to help produce more books that a younger version of herself would’ve loved. But because she’s the only person of color on a 20-person editorial team, Ishola says it can be difficult advocating for herself and asking for support.

"I worry about complaining or showing any sign that shows anything besides that I’m perfectly happy, because I’m worried how that reflects on me as an employee," Ishola says. "I think the people I work with are very conscious of diversity, but they’re not in the same situation and I don’t know how to have conversations where I can be truly honest."

Ishola's experience is far from being the only one. All 10 women who spoke to Bustle about their publishing careers described a “very white, very privileged industry,” as one assistant editor put it, with most positions held by people who can actually afford the low salaries.

"I worry about complaining or showing any sign that shows anything besides that I'm perfectly happy, because I'm worried how that reflects on me as an employee."

Indeed, white or Caucasian people make up 86 percent of the publishing workforce, according to the Nov. 2018 salary and jobs survey by Publishers Weekly. Women dominate the industry across all departments, including editorial, production, sales and management. More than half of all management positions were held by women in 2017, up from 49 percent during the year before.

Staffers across a range of positions say people of color are at a disadvantage when it comes to building publishing careers.

Historically, communities of color haven’t accumulated generational wealth, says Diana Pho, 33, an editor at Tor Books, a science fiction and fantasy publisher under Macmillan. They may be more likely to come from immigrant families, be first-generation college students, have more student or medical debt, or have other obligations that are related to larger systemic problems.

"If we want to diversify our workforce, we have to address the economic inequality that keeps certain people from entering or staying in the industry in the first place," says Pho, who has worked in publishing since 2007.

Ishola, a former teacher of seven years, says she took a $20,000 pay cut to change careers.

"Going into publishing has made me feel a little bit of shame because I can’t take care of my basic needs," Ishola says. "My sister and my parents are like, 'You know, you’re just starting out. It’s okay.' But there’s a still a question of, 'Can you stay in this career long-term, though?'"

"If we want to diversify our workforce, we have to address the economic inequality that keeps certain people from entering or staying in the industry in the first place."

The gender pay gap within publishing is a whole other issue. The average salary for men in publishing is $87,000, compared with $60,000 for women, according to the Publishers Weekly survey. The biggest complaint, the survey found, was the lack of promotions and opportunities to advance in their careers.

One Chinese assistant editor for a large publishing house says she knows there’s a significant wage gap between her and another white male assistant editor. A Black former editorial assistant says she was satisfied with her starting salary until she discovered a few months later that other women of color in the same role were getting paid more, even though they had less experience.

Ishola says she knows other young, female editorial assistants at her company who haven’t been promoted despite putting in the time, including one who has been in the role for more than two years.

While she hopes to stay in publishing in the long run, Ishola says she has to be realistic. If opportunities for promotions are sparse, “I’ll have to think of ways to do what I love but in a more sustainable way,” she says.

The lack of diversity and abysmal salaries are exacerbated by the overwhelming pressure to either move to or stay in New York City, where most major publishers are located.

Denise Conejo, 27, is familiar with that pressure. The Harlem native attended the publishing certificate program at the City College of New York, which is dedicated to specifically helping people of color break into the industry.

While Conejo was in the program, she applied for and received a women’s media fellowship that connects collegiate women with mentors in the publishing industry. Aside from one woman of color, nine out of the 10 mentors who spoke with Conejo were older white women.

"None of them said anything to me that was something I could relate to," Conejo says. "Their stories were just, 'Oh, I just happened to fall into publishing.' That wasn't helpful for me because I felt like I was fighting to get into publishing."

She managed to land internships at various publishing houses, including Penguin Young Readers and Europa Editions. After she graduated in the summer of 2016, she interviewed for countless editorial positions in the city. But they were too competitive, and she didn’t get any calls back. In the end, she decided to join an audiobook publisher in Old Saybrook, Connecticut, instead, where she works now as a proofreader and editor. She says she was the first person of color to be hired for her department.

"None of them said anything to me that was something I could relate to. Their stories were just, 'Oh, I just happened to fall into publishing.'"

Being able to find a mentor with a similar background in the industry is essential to one’s success, but especially for women of color in entry-level positions, says Ebony LaDelle, senior marketing manager for teen books at HarperCollins.

"You’re looking for someone that you see yourself in," LaDelle tells Bustle in an email. "It helps you visualize yourself growing in a company."

Workplaces that aren’t inclusive can often be triggering for the women of color who do work there.

Ruoxi Chen, 31, tells Bustle that she’s been in uncomfortable situations in previous publishing roles where coworkers would discuss books that feature Chinese culture and then stare at her.

"Either you validate the tokenizing that’s really happening, or you allow a roomful of people to make a meaningful decision about something they’re maybe not experienced in," says Chen, an assistant editor for science fiction and fantasy books at a large publishing house in New York.

Similarly, Claire Yee, 26, worked at a small academic publishing company based in San Diego, California, shortly after college. There, she was met with a toxic work environment and often witnessed or experienced microaggressive behavior. When Yee inquired about future promotions, her manager — a white woman — said there was a possibility of getting promoted the next time someone was pregnant.

"Either you validate the tokenizing that’s really happening, or you allow a roomful of people to make a meaningful decision about something they’re maybe not experienced in."

"I don't think promotions correspond to someone else's other life choices," says Yee, who now works in San Francisco, Calif., as an editorial coordinator for a different academic publisher. “How well I do at my job should be based off of how I'm doing, not whether someone else takes maternity leave.”

The lack of knowledge around intersectionality can also pose a major problem. For example, when Yee’s company hosted a diversity and inclusion speaker series, nearly all of the speakers they picked in one year — except for a black man — were white women. When Yee pointed this out, she says one of her coworkers replied, "Well, Claire, I think the diversity here is that they’re women."

Sometimes, the mental and emotional energy it requires women of color to tackle sexism, racial stereotypes, and tokenism in workplaces can lead to a physical toll.

That was the case for Patrice Caldwell, the founder of People of Color in Publishing, a grassroots organization that supports marginalized people who work in the industry. When she took her first job at a major publishing house in the spring of 2016, she packed her belongings and moved to New York from Boston, Massachusetts, where she attended college.

But at her new company, Scholastic, she was one of few queer women of color. As an editorial assistant, Caldwell says she regularly experienced microaggressions and was treated by coworkers as the "go-to person" on how to be inclusive — an industry-wide problem that many women who spoke to Bustle echoed.

"They want someone to co-sign what they’re doing," Caldwell, 25, says. "But when you bring up a problem, they don’t want to actually have a dialogue with you about it. It takes up your emotional energy."

The mental stress of constant code-switching, navigating a toxic workplace, and fighting for inclusive books manifested as physical symptoms — including panic attacks and chest pain — that eventually landed her in the hospital.

"They want someone to co-sign what they’re doing. But when you bring up a problem, they don’t want to actually have a dialogue with you about it."

Shortly after a year, she left Scholastic and joined Disney Publishing as an associate editor. There were also very few staffers of color at Disney, she says. She left her role in Dec. 2018.

"I'm so burnt out," says Caldwell, adding that she’s taking a break from the corporate publishing world for the sake of her physical, mental, and emotional health.

The lack of staff diversity in publishing doesn’t just affect workers’ well-being, but also the kinds of books that get published and the way they’re treated on the market, says Pho, the editor at Tor Books.

"Having marginalized people work on stories about their own communities shows how a book is marketed or what kind of publicity it gets," says Pho, who is Vietnamese American.

Last year, for example, Starscape — an imprint of Tor Kids — published Everlasting Nora, a middle-grade novel about a 12-year-old girl from the Philippines. Pho says she immediately connected with the story not only because it was a compelling read, but also because it addressed the topics of “classism and family dynamics and poverty that I related to on some level even coming from a diaspora culture.”

Having that personal tie, Pho says, propelled her to buy Everlasting Nora and market it to audiences that wouldn’t have considered it otherwise — particularly students in middle school who either get to know a character of the same age from a different country or are Filipino themselves. Since the book's release, Pho says she has received feedback from kids of all age groups, including Filipino readers who'd previously "never read a book about themselves that's written for U.S. audiences and still embraces their culture."

History has shown what can happen when publishing houses aren’t diverse enough. In 2015, McGraw-Hill drew harsh criticism after a high school student noticed that his textbook, published by the education giant, referred to slaves as "workers." Many people who work in publishing argue that such incidents wouldn’t happen if publishing teams were diverse enough to make sure books meet fact-checking and general publishing standards.

Caldwell says diversity is often seen as a "selling point" in the books industry, but that’s ultimately not enough.

More like this
24 History-Making Black Women You Probably Didn't Learn About In School
By Ayana Lage and JR Thorpe
Samantha Leach's 'The Elissas': See The Cover & Read An Exclusive Excerpt
By The Editors
Pamela Anderson Is Still A Hopeless Romantic
By Ilana Kaplan
Delia Cai’s Small-Town Romance Goes Beyond The Tropes
By Samantha Leach
Get Even More From Bustle — Sign Up For The Newsletter
From hair trends to relationship advice, our daily newsletter has everything you need to sound like a person who’s on TikTok, even if you aren’t.