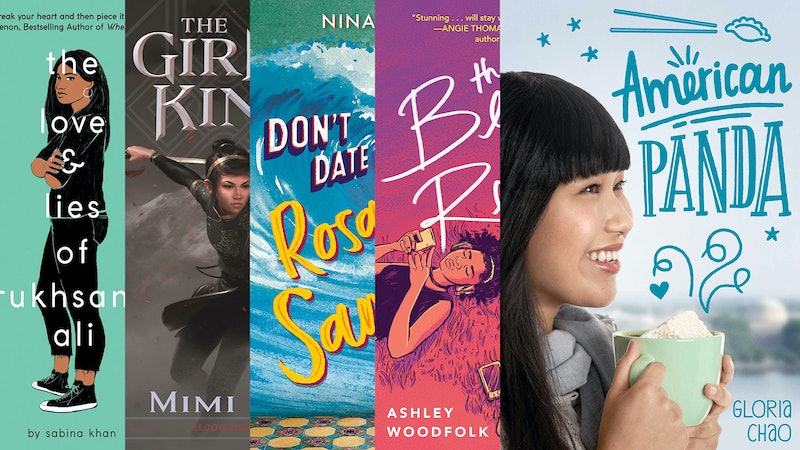 Gloria Chao, the author of American Panda, started reading and writing young adult books during an unhappy stint in dental school. She eventually left dentistry behind to write full-time, but it was three years before she signed with an agent and got a book deal. Her story isn't unusual: Rejection is common in the books world, and authors of color, who are particularly underrepresented in publishing, often have a harder time breaking into the industry than white authors. The data supports this: According to a study done by Lee & Low, just seven percent of new children's books published in 2017 were written by Latinx, Black, or Native authors.

“I do believe authors of color face more obstacles in this business. I’ve experienced some of it myself, with Chinese culture being foreign to readers and with my book being labeled an 'Asian' book even though I feel it’s a story about a typical American teen,” Chao tells Bustle. “I think it’s harder for authors of color to find agents and editors who understand our stories. I think publishing has made some great strides recently but there is still much work to do.”

"I think it’s harder for authors of color to find agents and editors who understand our stories."

Authors who aren’t represented by literary agents send out queries to possible agents; these typically include a summary of their finished manuscript, sample pages, and biographical information relevant to their writing. Agents typically receive thousands of queries a year, but they can only reach out to a small percentage of writers to see their pages or offer representation.

People of color aren’t a monolith, and for industry professionals and authors of color to work well together, they don’t have to come from the same cultural or ethnic backgrounds. It can be tricky for aspiring authors of color to find an agent who they can trust with their story, who understands their perspective, and who can help them to successfully navigate the industry — but it is possible.

American Panda was the second book that Chao queried, but it was the first book to receive an offer of representation. Chao decided to sign with her agent because of "her revision notes helped me hone a part of the mother-daughter relationship in American Panda I had been struggling with. She also was at a top-notch agency, had a stellar sales record, and was kind, professional, and honest."

Having a clear idea of what you want from your author-agent relationship and keeping your ultimate goal in mind as an author are the keys to finding the right agent, says Ashley Woodfolk, the author of The Beauty That Remains. While querying her first book, she decided to send her queries predominantly to female agents of color. “I knew that I wanted an agent who I wouldn’t have to explain why I was writing the kinds of characters that I was writing, characters of color largely, LGBTQ characters, just characters that sort of represented the world as I saw it and the world as I wanted it to be, I guess," she tells Bustle.

The white agents Woodfolk did include on her list of potential agents had a record of working with diverse writers. During her second round of queries (her first book did not receive an offer of representation), Woodfolk sent her queries to batches of five agents at a time, instead of simultaneously sending it to all of the agents on her list. In addition, she also looked up information about the agents on Twitter — a research approach that worked for The Girl King author Mimi Yu, as well.

As a child, Yu wrote both at school and outside of class. But after college, she chose to leave writing behind, because, she tells Bustle, she believed her options for a career were limited. Part of this was because she was the child of immigrants and a woman of color, and although she was raised “pretty well-off” there were class signifiers that she said she didn’t know, and didn’t have the networks that wealthier classmates did. It was around 2011 and 2012 that she started to write professionally.

According to Yu, it’s not uncommon for books by authors of color to be misread by a white reader who questions ethnic components of the book. Microaggressions happen in publishing and outside of it, which makes signing with a supportive agent crucial. Coincidentally, Woodfolk and Yu signed with the same agent.

Nina Moreno connected with her agent during their first conversation. Don’t Date Rosa Santos, Moreno’s debut novel which is coming out later this year, is her first book to sell to publishers, and the second book she worked on with her agent. “She loved the story, but most importantly, she had connected with my voice, cultural influences, and understood how important they were. She was early in her career too, but at an established agency with other agents who really supported each other as a team. You have to listen to your gut, but also understand you’re going into a business partnership into the wild, messy world of publishing.”

Over time Moreno’s become braver with her writing and "went for it” with her debut novel, writing about her culture instead of avoiding the topic in a bid to try to belong in the literary world.

Family played a large role in Sabina Khan’s debut novel, The Love and Lies of Rukhsana Ali, which was heavily inspired by her own daughters. Khan found her agent after she entered a Pitch Wars contest — a mentoring program that helps authors develop their work and query letters to show agents — and won the chance to polish her manuscript further with a mentor. Afterwards, an excerpt of her book was shared online during an “agent round,” when literary agents show interest in different manuscripts. By her account, she received about 22 requests to see pages of her book and was ultimately offered representation by several agents. Khan described the process of querying and finding an agent as “actually a really good, exciting and positive journey for me. I was very lucky.”

Querying agents and finding representation is typically a long process, but finding the right person to work with makes a world of difference for aspiring authors. Initiatives like #DVPit and organizations like We Need Diverse Books are helping authors of color to find representation and sign with an agent, so their books will hopefully get published. At the same time, more progress needs to be made so the publishing industry is truly inclusive.

“Write your story, write your truths, and write the books you wish were out in the world. It’s harder for authors of colors in this industry but writing for the market benefits no one. There are readers out there who need your voice, and they’re worth the time, effort, and frustration,” Chao says.