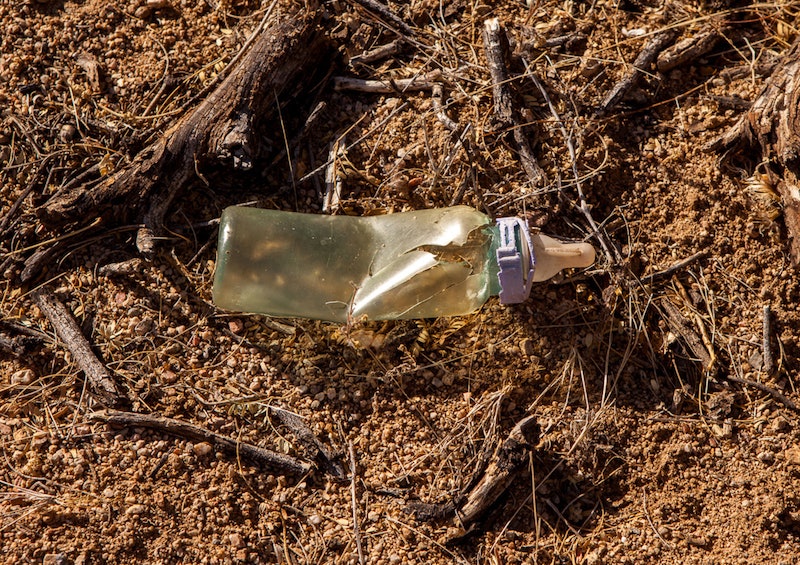 When anthropologist Jason De León began his excursions to the Mexican-American border in 2009, some of the objects he found left behind by immigrants trying to enter the United States hit harder than others. A baby bottle or pair of toddler's shoes triggered intense sadness, the kind one seldom feels when life and death don't teeter on the whims of the Arizona desert.

But eight years later, De León has learned that what most would dismiss as trash — empty food wrappers, dirty socks — has just as much impact as mementos that seem more significant at first glance.

"All of those things represent some story. Some of them are harder to decipher than others," he tells Bustle.

Even a used water bottle, chucked to the side and covered in dust, has its own narrative.

"That might have been something that saved someone's life," De León said. "That might be the last bottle of water that someone drank before they died."

An assistant professor of anthropology at the University of Michigan, De León splits his time between Ann Arbor and Arizona. He directs the Undocumented Migration Project, an archaeological study aimed at preserving and analyzing the migrant experience. In the field, he straddles Mexico's northern frontier, collecting artifacts and ethnographies on both sides.

"In general, the things that you see are a mix of personal survival sorts of things, as well as whatever kind of small possession that you can take with you, that you can carry on this journey. Things to connect you to home," he says.

"People say, 'It's just child molesters and atomic bombs coming across the border.' Well, you know what, that's not what I'm finding out here, and that's not who I'm talking to who's coming through the desert."

While xenophobia and hate towards immigrants is nothing new, many critics argued that Donald Trump's presidential campaign played into fears of foreignness. Trump dubbed some Mexican migrants "rapists" and "criminals" as early as his presidential announcement, despite statistics from Census data and the Department of Justice that indicate "immigrants are less likely to commit crimes than people born in the United States," as Richard Pérez-Peña noted in a New York Times report.

"People say, 'It's just child molesters and atomic bombs coming across the border.' Well, you know what, that's not what I'm finding out here, and that's not who I'm talking to who's coming through the desert," says De León.

He adds that while he does encounter the occasional empty bale of marijuana or walkie talkie that represents drug activity in the region, the vast majority of what he sees speaks to poor people trying to improve their lives or return to families.

"There's nothing in the archeological record that you would look at and go, 'Huh, these are bad hombres,'" he says.

Over the years, De León has noticed changes in the objects he finds as what was once an on-foot journey of a few hours has morphed into a week-long nomadic battle in a lethal climate. He said people have realized that their most dire need is water, and everything else — from food to sentimental possessions — comes second.

"You don't see the things that you used to see, which would be the cocktail dress, or the blow dryer," he continues. "The things that are completely useless in the desert that people thought that they were going to need in the United States."

Migrant demographics have evolved, as well, which has affected De León's findings. Since 2014, when mothers and children especially started crossing the border to get away from life-threatening situations in Guatemala, Honduras, and El Salvador, he has observed another shift in his archeological discoveries.

"Those folks who are coming from Central America, they're losing everything in Mexico, and so by the time they get to the northern border, they don't have anything," he says.

But even as many components of the trip change, some things stay the same, like people's resolve and resourcefulness. De León recalls a pair of women's shoes: knock-off Nikes where the soles had been reattached with a rope and a bra strap.

"For me, that speaks to both the physical violence that people experience, as well as the hope and the resilience that people have," he says. Often, he adds, he is left wondering, "What happened to this person?" He hopes for the best, but imagines the worst.

As he tells stories that have been lost to the border, De León says it can be difficult to stay optimistic.

"When you find something that is like a series of photos of a kid or a bible, it's actually really heartbreaking," he continues. "You know that somebody did not mean to leave those things behind, and that they've lost this precious thing that they were carrying with them."

Artifacts from the Undocumented Migration Project can be seen in the "Many Voices, One Nation" exhibit at the National Museum of American History in Washington, D.C., opening this summer.