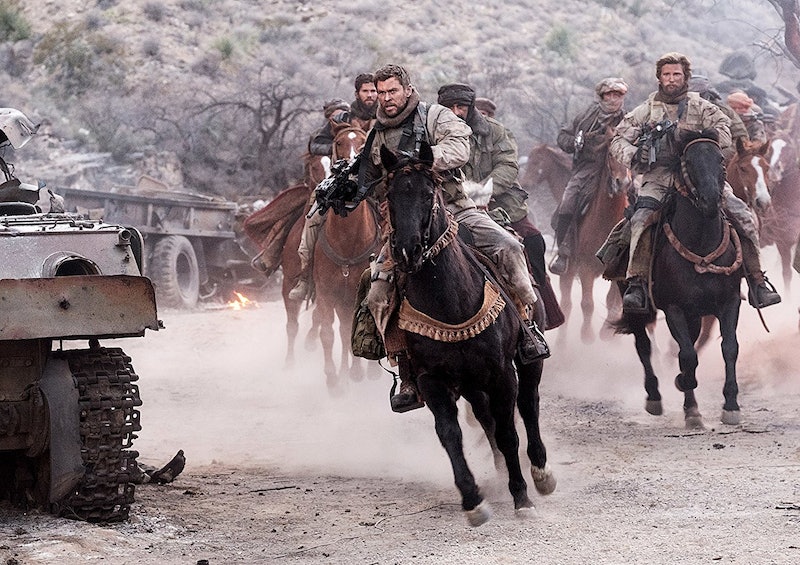 The new film 12 Strong isn't your average war movie. The film tells the story of the so-called "horse soldiers" — the special ops forces who were among the first on the ground in Afghanistan following the terrorist attacks of Sept. 11, 2001. The movie is based on a true story, but just how accurate is 12 Strong? Does the film actually give a truthful account of what the real life horse soldiers experienced, or does it merely use the idea of U.S. Special Forces soldiers on horseback to romanticize the war in Afghanistan?

The film mostly sticks to the facts. It's based upon the book 12 Strong: The Declassified True Story of the Horse Soldiers, by author Doug Stanton, but the majority of the movie's characters are technically fictional, though inspired by actual people. Chris Hemsworth, who stars in the film, portrays U.S. Army Captain Mitch Nelson, who is not a real person but was inspired by Mark Nutsch. Nutsch was the leader of the Green Beret unit who would go on to be called the horse soldiers, and even though Hemsworth isn't technically portraying him in the film, the Thor star still met with the real life soldier in order to prepare for his role in 12 Strong. In an interview with the New York Daily News, Hemsworth revealed that the film production made every effort to tell the story in an accurate and respectful way:

"A lot of the time (in movies) you’re having to sort of dramatize the events or invent all of these characteristics about it. Although there’s a pressure, it’s just such an advantage because you have this action figure right there in front of you to use as inspiration ... We had to keep checking ourselves and going, ‘'Hang on, are we doing this justice? Are we respectful about our approach?'"

The story the film tells, about how a group of U.S. Special Forces soldiers allied with an Afghani warlord and his soldiers to battle the Taliban in the aftermath of 9/11, isn't one that many people know, and so a concerted effort was made to show that the majority of Afghani people are not the bad guys, with a number of Afghani actors participating as extras in the film. "I’ve had people from Afghanistan say, "Thanks for helping to tell the story that says we’re not all terrorists," Hemsworth told Slashfilm. "It wasn’t about America coming in and saying, 'We’re taking over and this is how we do it.' It was a diplomatic approach about working with the locals and spreading the word that we’re fighting a common enemy, and that the Taliban and Al-Qaeda were the ones that were attempting to take over."

The movie also made a point to use period-specific (and real) army equipment. "Every helicopter you see in the movie is an actual 160th helicopter," Army Special Operations Command spokesman Lt. Col. Robert Bockholt told Army Times. "Because those are the ones who flew those actual insertion missions." Perhaps most remarkably, the film even has a bit of art imitating life, as Rob Riggle, a former U.S. Marine, portrays the unit's commanding officer Colonel Max Bowers, under whom Riggle actually served in Afghanistan during the same time period. "I had a script, I tried to extrapolate what I knew of the man, what I knew of the situation," Riggle told Army Times. "We had a lot of meals together. I heard a lot of stories."

But like any Hollywood war movie, 12 Strong doesn't stick to the facts entirely. According to Nutsch, some details were fabricated or exaggerated for the film, but the important aspects of the story remain intact. The film still "represents all the main players of that historical action," the veteran told the Daily News.

While the facts may be stretched and the bulk of the names changed, 12 Strong still keeps the spirit of the horse soldiers' mission intact, making for a largely truthful — and little-known — war story.