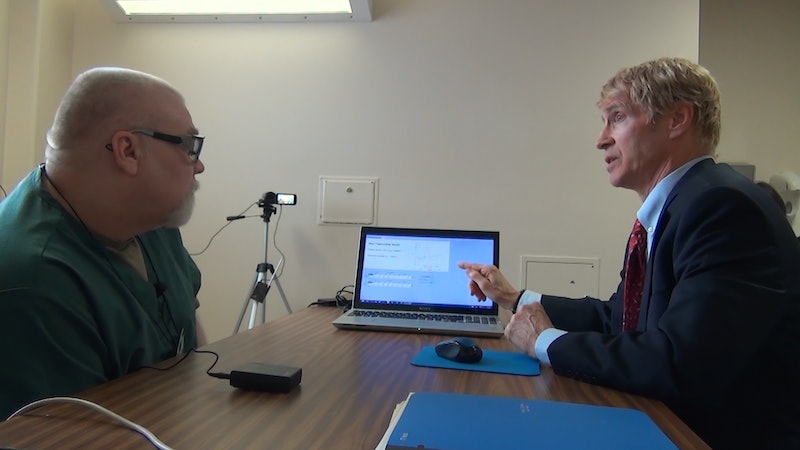 In Making a Murderer Part 2, Steven Avery's new defense attorney, Kathleen Zellner, brings in a number of experts to consult on his appeals case. (Avery was convicted for the murder of Teresa Halbach in 2007, but has firmly maintained his innocence). This includes Larry Farwell, the inventor of a polygraph-like technique called brain fingerprinting. Zellner believes it can provide valuable new evidence — if Avery's brain doesn't register certain details of the crime, she argues, he must be innocent — but the accuracy of brain fingerprinting is contentious among the scientific community. So what's the deal?

According to a report from The Verge, brain fingerprinting is said to function like an advanced lie detector test. It takes EEG readings of brain activity using electrodes, then tracks people's response to specific facts or images in order to determine whether or not those details are stored in their brains. As The Verge explains:

In 1965, a group of scientists discovered a distinctive surge of electrical activity in the EEG wave when a person saw something familiar, usually arriving 300 milliseconds after the object was revealed. They called it the P300 response, and while the neurological origins of the surge are still unclear, the behavior has been replicated over and over in the decades since.

This P300 response is sometimes used during interrogations as part of a method called the Concealed Information Test (CIT), in which authorities will ask a suspect pointed questions about a crime: Was the victim shot? Stabbed? Strangled? Only one of them is true, but if the suspect knows the victim was shot, they'll show a P300 response. The Verge notes that while traditional polygraphs measure bodily responses like sweat, P300 is focused exclusively on the brain, making it more resistant to diversion tactics.

The P300 response is also what informs brain fingerprinting. Farwell's theory is that if you show someone information about a crime that only the person who actually committed it would know, then mapped their P300 response to see if they were familiar with those details, you can determine whether they're guilty or innocent. A summary of the brain fingerprinting test found on Farwell's website describes the process as follows:

Words or pictures relevant to a crime, terrorist act, terrorist training, or specific knowledge or expertise are presented on a computer screen, in a series with other, irrelevant words or pictures. A suspect’s brainwave responses to these stimuli are measured non-invasively using a patented headband equipped with EEG sensors. A proprietary computer program then analyzes the data to determine if the crime-relevant information is stored in the brain. A specific, measurable brain response known as a P300 is emitted by the brain of a perpetrator who has the details of a crime stored in his brain, but not by an innocent suspect lacking this record in his brain. The P300 response has been extensively researched and widely published in leading professional journals for more than 30 years and has gained broad acceptance in the scientific field of psychophysiology.

In the case of Avery, Farwell showed him words on a computer screen, some of which were related to Teresa Halbach's murder. "We present three different types of stimuli," Farwell explains in Making A Murderer Part 2. "Things we know he knows, things that are irrelevant... and then probes, where we will get the response only if he knows it." The computer flashed with words like "Toyota RAV4", "golf club", and ".22 bullet". At the end of the testing, Farwell said he believed Avery wasn't involved with Halbach's murder. He also claims on his website that "Brain Fingerprinting testing has made a definite determination in every case, including felony crimes. 100 percent of determinations have been correct."

However, other scientists have pushed back against Farwell's work. A 2014 study that compared the results of brain fingerprinting with those of a polygraph test found that "when innocent participants were included, the P300 far outpaced the traditional polygraph, resulting in far fewer false-positives. But when the participants had to work through an actual crime scenario, stealing a purse and then being confronted with details, the P300 was often less reliable than the polygraph," per The Verge.

A group of researchers also wrote for Cognitive Neurodynamics in 2012 that Farwell's claims of success were not entirely founded, and that his findings — published earlier that year in the same journal — were "misleading." They concluded that both CIT and the P300 waveform are valid, well-established measurements, but that by "selectively dismissing relevant data, presenting conference abstracts as published data, and most worrisome, deliberately duplicating participants and studies," Farwell "misrepresents the scientific status of brain fingerprinting." Ewout Meijer, one of the article's authors, said that he stands by this opinion in 2018, telling Bustle via email that, "​There is nothing intrinsically wrong with [brain fingerprinting], but Farwell is overselling it with his claims of (near) perfect accuracy."

Following this criticism, Farwell published a response in the same journal, claiming Meijer et al "made demonstrable misstatements of fact" and "did not cite any data that contradict" the three hypotheses presented in his original paper, "nor did they propose alternative hypotheses or standards." He also claimed to Bustle via email that the scientists only took issue with the way he presented his brain fingerprinting findings, not the technique itself, and that "they also took a negative view of my personality, writing style, motives, and other personal things." He concluded that he "bear[s] no ill will toward them" and that they are "all working in our own ways toward the same goal of scientific progress."

The jury is still out on whether brain fingerprinting (which has already been used in Indian courts and has been tested in Australia) is an accurate method for determining a suspect's innocence. But it certainly seems like it will be a key part of the case Zellner is now building for Avery.

More like this
Anthony Templet Wants To “Live Normally” After Killing His Father
By Brad Witter
Where Is Charlie Evens Now?
By Morgan Leigh Davies
Here’s Where Kirra Hughes Is Now
By Morgan Leigh Davies
‘Squid Game’ Creator Hwang Dong-Hyuk Just Dropped A Major Season 2 Tease
By Brian Anthony Hernandez and Bustle Editors
Get Even More From Bustle — Sign Up For The Newsletter