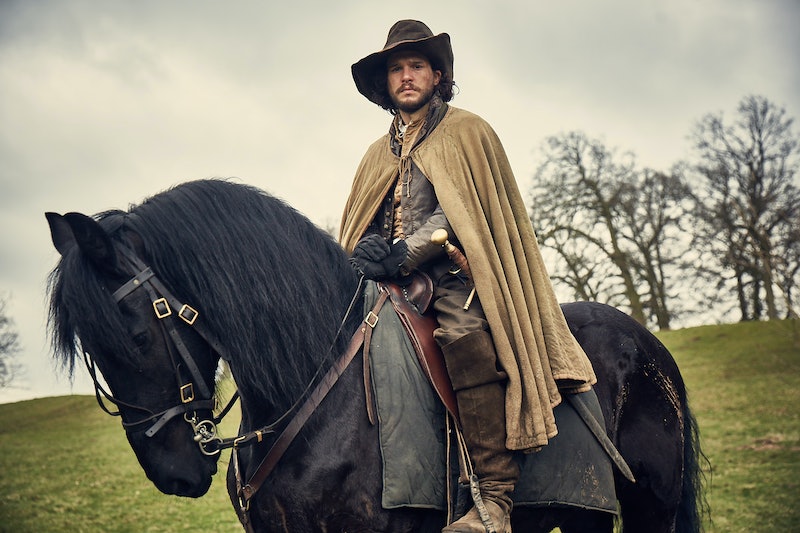 Fans of period pieces and Kit Harington are in for a treat On Dec. 18, when a brand new 17th-century-set miniseries hits HBO. So, how accurate is HBO's Gunpowder? The series will follow Robert Catesby in 1605 London, according to HBO's site, in his struggle against Catholic persecution by the British governing royals — pretty compelling stuff. And, apparently, it's quite true to history. Beware — reading on about the real-life events will definitely involve some spoilers for the show. (Bustle reached out to HBO about the accuracy of the show but has not yet heard back.)

According to the History Channel's site, Catesby and his co-conspirators were very real people who wanted to get rid of Britain's Protestant rule and replace them with Catholics. "Around midnight on November 4, 1605, one of the conspirators, Guy Fawkes, was discovered in the cellar of the Parliament building with barrels of gunpowder," the site reports. "Fawkes and other men involved in the plot were tried and executed for treason."

Yikes. So, it doesn't look so great for the show's subjects. Catesby also had quite a personal reason for wanting to overthrow the Protestants — his own father, according to the same History Channel article, had been persecuted by Queen Elizabeth I for "refusing to conform to the Church of England." The article reports that those behind the plot rented a cellar beneath the House of Lords building and planted gunpowder to blow it up.

Despite their apparent careful planning, it went downhill quickly due to spies working against them. Though Guy Fawkes, another one of the conspirators, was able to successfully plant the explosives, the plot was ultimately unsuccessful. Lord Monteagle, who, according to the same History Channel article, was a brother-in-law of one of the conspirators, received an anonymous letter telling him not to attend Parliament on that day. "Monteagle alerted the government, and hours before the attack was to have taken place, Fawkes and the explosives were found," the article states. "By torturing Fawkes, King James' government learned the identities of his co-conspirators."

The plot actually made things worse for Catholics in England. "Following the failed Gunpowder Plot, new laws were instituted in England that eliminated the right of Catholics to vote, among other repressive restrictions," the History Channel article states. However, Fawkes is remembered by the people of Britain today, though it's not exactly fondly. Each year on Nov. 5, the country celebrates Guy Fawkes Day and Bonfire Night, according to The Telegraph, with fireworks, bonfires and parades, often involving burning straw dummies representing Fawkes.

For all intents and purposes, Gunpowder is based on a very real story and remains relatively accurate, according to another article by The Telegraph. The outlet states that even the gruesome torture and execution scenes were relatively true to life, and they were something Harington felt were musts to include. "It was important for the story because right from the start we need to know why Robert Catesby embarks upon this very, very violent act,” he said, according to the Telegraph, also reiterating the authenticity of the series. "At the time, Catholics were being persecuted and there is nothing in this which is not historically accurate. So we needed to see something quite violent from the start which makes us understand why this man might do what he does."

The show's in good hands, with it being a pet project of Harington's that's been in the works for years. "Three years ago, Daniel West and I conceived and began developing ‘Gunpowder’ with Kudos and Ronan Bennett," Harington, who plays Catesby in the show, said, according to Variety. "We are now thrilled to share this unique story with the U.S. audience. I can’t think of a better place to do that than my home at HBO."

The three-part series certainly has some dramatic inspiration to draw upon, and it seems that, especially in this case, historical truth is just as compelling as fiction.