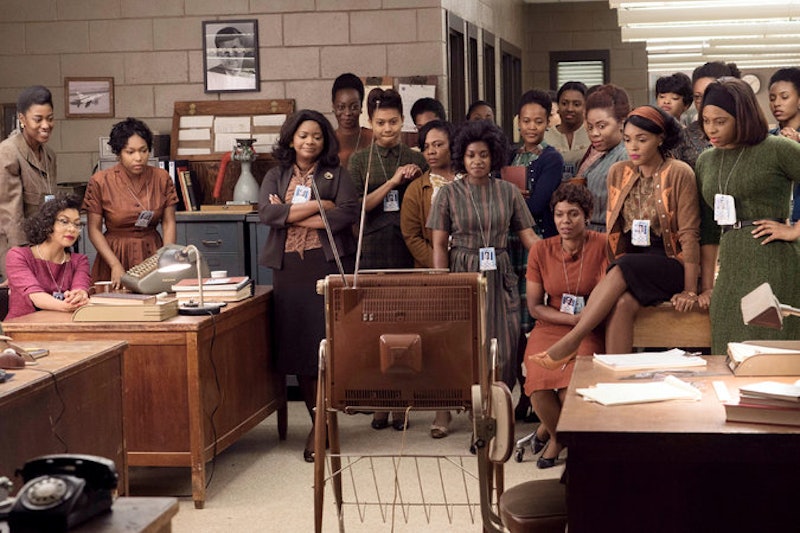 Hidden Figures, the inspiring new film about the African-American women who made it possible for NASA to send a man to space, is getting great reviews and lots of deserved attention for the way it finally shines a spotlight on some of the many heroes from history that, because of America's ingrained racism and sexism, have not received due credit and recognition for their work. The film, based on a true story, follows three brilliant women "computers" at NASA in the '60s: Katherine Johnson, played by Taraji P. Henson, Dorothy Vaughan, played by Octavia Spencer, and Mary Jackson, played by Janelle Monae. These women were indeed real, amazing people, but how accurate is Hidden Figures?

Fortunately for all, the filmmakers had an incredible amount of primary and secondary source material from which to get all the details right. Hidden Figures is based off of the nonfiction book Hidden Figures: The American Dream and the Untold Story of the Black Women Mathematicians Who Helped Win the Space Race, written by historian Margot Lee Shetterly. Shetterly's book is fantastically well-researched, walking readers through the social and political world in which Johnson, Vaughan, and Jackson lived, and telling a detailed narrative of their lives and the work they accomplished.

The women's mathematical, physics, and engineering work was integral to the success of America's space program, and particularly to the launch of Friendship 7, the space shuttle that brought John Glenn into orbit and officially made an American orbit the Earth for the first time, in 1962. In one already iconic scene from the film, Glenn is concerned about the launch. He's not sure if everything is right, so he demands that the numbers get checked by the only person he can trust: "get the girl to check the numbers," he says, referring to Johnson, who was a lead research mathematician.

That might seem like a classic movie-magic scene that fictionalized a loosely true event, but in an NPR interview Shetterly, quoting directly from transcripts, confirms that the scene actually happened almost exactly like that in real life.

He said: Get the girl to do it. I want this human computer to check the output of the electronic computer, and if she says they're good, you know, I'm good to go as part of one of my pre-flight checklists.

That the quote from the move is real is especially fascinating in the way that it is both progressive and also not. Glenn knows enough to respect and trust Johnson's opinion and intellect above everyone else's, but he still refers to her somewhat in a somewhat dehumanizing way, as "the girl." It's one of the many moments from the film that accurately represents that challenges, both explicit and more subtle, that Johnson, Vaughan, and Jackson faced because they were black women.

Many important figures in the space program have also chimed in to comment on the accuracy of the film. In an interview with the Daily Press, Bill Barry, the resident historian at NASA Langley Research Center, said that he was asked literally hundreds of questions by the cast and crew about the scientific history they were telling on screen, and admitted to being amazed at how accurate the filmmakers were. "They wanted to know what a NASA parking lot looked like in 1961 — what kind of cars, that kind of thing — so we tracked down a photo and sent it to them," he said. They even asked about little details in the spacecraft, he said: "'What was the purpose of an O5G switch and where would it be on the panel?' So we tracked down a manual for that spacecraft and sent them copies."

And Johnson herself, now 98 years old, reportedly approves of the story told about her life in Hidden Figures. She told the Daily Press, after a screening of the movie, that from her perspective "It sounded good...It sounded very, very accurate."

It's hard to top that assessment from by far the most important critic for this movie, its incredible subject.

Editor's Note: A previous version of this article mistakenly said that John Glenn was the first man to orbit the Earth, when in actuality, he was simply the first American man to do so.