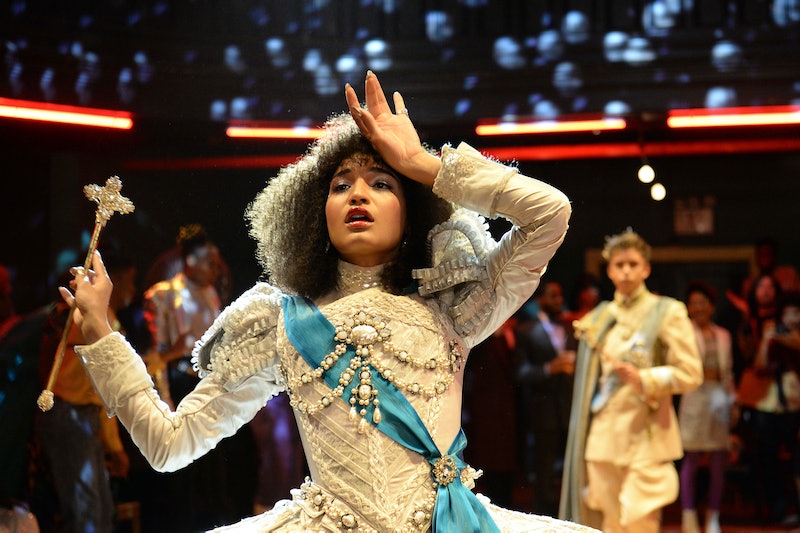 Ryan Murphy is back on FX, serving as creator, director, and executive producer of Pose, which premiered on June 3. Like Versace and Feud before it, this series is also a period piece, this time about a more underground aspect of '80s glamour than fans saw on American Crime Story. But how accurate is Pose? The FX series goes to great and refreshing lengths to portray New York ball culture with care and accuracy. Mild spoilers for the premiere ahead.

First thing's first — the show's storyline and characters are fictional. House Abundance and House Evangelista, the rival groups/found families of performers on the show who do so much more than drag pageantry, were not part of the scene IRL — however, those fictional names are not too far off from some of the real ones. Real houses at the time had names like LaBeija, Omni, Blahnik, and Xtravaganza, according to Philadelphia Weekly. In fact, founder and ball expert Grandfather Hector of House Xtravaganza did consult on the FX series.

The plot itself involves a few incidents that seem too theatrical to be true. For one thing, did a house really heist regal attire to use as costumes from a museum and get away with it? In the pilot episode, House Abundance gets away with lifting the fabulous dresses because the homophobic (and transphobic) museum honchos would prefer to keep their crime out of the news. While it seems like this storyline could have been ripped from the 30-year-old headlines, it's more likely an invention of the writing staff — or some kind of ballroom legend that has been whispered on the wind over the years.

Second, would a doctor recommend AZT to an HIV+ patient in 1987? This happens to Blanca (Mj Rodriguez) in the pilot episode when she receives her diagnosis. That detail might trip up some viewers familiar with the timeline of the crisis and its treatment options — or, at least, familiar with the plot of Angels in America. Tony Kushner's epic play dramatizes the last few weeks of infamous lawyer Roy Cohn's time on Earth in 1986. Cohn was HIV+ in real life and used his clout to participate in early AZT trials according to the New York Times, getting his hands on the drug before many other afflicted individuals. Access to that medication was a privilege at the time. The drug was approved by the FDA in March 1987, according to the United States Department of Health and Human Services. So it's plausible that Blanca's doctor would recommend the drug to her, just less so that she'd be able to afford it.

On the other hand, the show is impressibly accurate when it comes to representation on film, with a record number of transgender actors on screen in series regular roles, according to Deadline. The Pose source material is an original script written by queer Afro-Latinx writer and New York City native Steven Canals, and writer and activist Janet Mock was brought on as a writer, producer, and director on the series.

"If you ask people 'how many trans folks do you know,'" said Mock in an interview with The New York Times, "most of the time, their only interaction is through the media. So, that sense of knowing and empathizing and embracing and fighting for that person — based on a character they see on TV — that takes a long time. But in Pose, you don’t just see one trans character serving the straight story line. You don’t see her dying and think, 'Oh, I’m going to be braver, too.' No, there are five trans women in the opening scene of Pose. We’ve never seen that before."

There are also some references to Donald Trump in the show's first episode. Stan (Evan Peters) meets with Matt (James Van Der Beek) in Trump Tower; his involvement in that world is comething Indya Moore's character Angel — one of the members of House Evangelista — views as impressive. This is Trump-era New York City — Reagan's America, which the current President so wishes to return to. Trump is not a character on the show, but his presence is felt. Incidentally, Roy Cohn (who had just died when the show begins, as mentioned above) was Trump's friend and mentor.

And it seems that the Trump references are very much intentional and carry a deep meaning. In the '80s in New York City, one "could pretend to be money and be seen as wealthy," continued Murphy in the same NYT interview. "You could pretend to be anything and be accepted, whereas before that, you really had to have the background and education and breeding. It was the beginning of surface passing. Before that, you wouldn’t be allowed in the room."

It's clear from its debut that Pose is more melodrama than documentary. As Blanca tells Angel in the first episode, fairy tales are just that. Maybe a group of queens never got away with a museum heist, maybe they did. Maybe a young boy rejected by his family was never marched into a dance school by his adopted house mother. But did drag houses provide refuge, community, and love to LGBT youth? Absolutely. Ball culture documentaries like Paris is Burning and Kiki have already told that truth, and it's part of a larger, important story that Pose is telling.