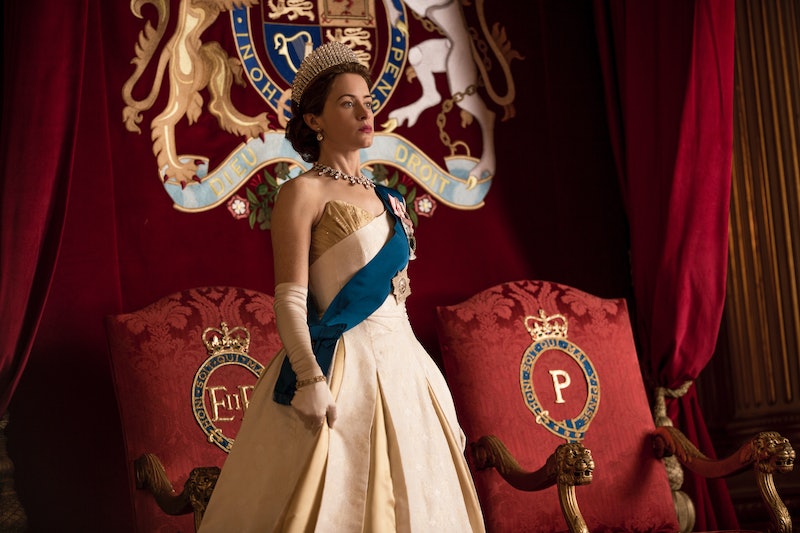 The beloved and acclaimed Netflix period drama The Crown premiered Season 2 on Dec. 8. Just like its freshman season, this one tackles many infamous historical events, but underlying all of it is the fundamental tension that Queen Elizabeth (Claire Foy) must learn to deal with — the tension of being a woman with opinions and feelings that must go unsaid in order to preserve the role of the Crown. Through shifting political winds, international crises and public speculation about her marriage, Season 2 sees Elizabeth struggling to maintain neutrality and keep a stiff upper lip. Many real-life events are dramatized for the show: how accurate is Season 2 of The Crown really? (Major spoilers ahead). Bustle has reached out to the royal family for comment.

Though the royal family is not involved with the show, and it is impossible to know the details of all the conversations that went on behind the closed doors of Buckingham Palace or 10 Downing Street, The Crown does ground its treatment of historical events in the facts that are known. The second season begins with the Suez Crisis of 1956, in which Egyptian President Gamal Abdel Nasser took control of the Suez Canal, which had previously been under the control of the United Kingdom and was a vital passageway for British commerce, per Vanity Fair. Prime Minister at the time, Anthony Eden, decided to conspire with French and Israeli forces in order to take back the canal, but when the United States refused to back the military action, England was forced to call a cease-fire: the entire event lasted 24 hours, the publication reports.

The show kicks off with this crisis point, and while the timeline of the events is correct, the conversations that occur between Eden and the Queen are of course fictionalized portrayals. Yet the show is loyal to the tone of the event: audiences can tell how determined Eden feels to not appear weak against those he views as dictators, as well as Elizabeth's struggle to maintain neutrality, and support the Prime Minister even though she might not agree with his policies. The show also doesn't shy away from depicting Eden's medical struggles, as the Prime Minister was prescribed a powerful dose of amphetamines and barbiturates (a medication called drinamyl, since banned from the UK) by his physicians, as reported by The Independent.

The Suez Crisis was an international humiliation that eventually led to the resignation of Eden (portrayed emotionally in the show by Jeremy Northam) and the rise of America on the international stage, according to the same Vanity Fair piece. And showrunner Peter Morgan was very intentional about choosing this particular historical moment to open the second season. In an interview with The Hollywood Reporter, Morgan shared:

"I did get to the point where I thought, 'Actually no, let's leave it on the knife's edge of Suez because Suez feels like a changing point for the country. Britain was never the same again after Suez.' Therefore, I was going to deal with that at the beginning of season two. Which we do."

Mirroring the tumultuous state of politics at the time is the period of discord in the Queen's marriage. Season 2 sees Philip sent off on a five-month tour of the Commonwealth, which the real Duke of Edinburgh actually did undertake, beginning in November of 1956, per Harper's Bazaar. But where the show takes some real liberties is in its suggestion of Philip's infidelities.

Though an affair is never shown onscreen, Elizabeth is depicted finding a picture of a ballerina in Philip's briefcase just before he leaves for the tour, suggesting that her husband might be engaged in a romance with another woman. His tour around the world is portrayed almost like a months long bachelor party, with Philip encouraging the men to play games, drink, grow beards, and flirt. At each stop, the Duke dances with a new woman. As the narrative progresses and the chain of women grows longer, it becomes very clear that if Philip isn't actually cheating on Elizabeth, it wouldn't be unreasonable to assume he was.

In real life, there have been whispers and claims in the press that Prince Philip had been unfaithful. Marie Claire reports that rumors of infidelity began swirling in 1948, when it was reported by tabloids that the Duke had been having an affair with actress Patricia Kirkwood (perhaps the inspiration for the ballerina in The Crown). Allegations of the affair have been denied vehemently by both Philip and Kirkwood, and the Queen's husband once famously responded to question about his alleged infidelity by saying, “How could I? I’ve had a detective in my company, night and day, since 1947" according to Vanity Fair.

The showrunners knew they were purposefully choosing an interpretation of history that may not be fully rooted in truth when they decided to allude to fictionalized Duke's affairs. Actor Matt Smith, who plays Philip in the show, explained to Vanity Fair why he felt the creative choice to imply infidelity was the correct one:

"I suppose the man in me thought it’s the more interesting dramatic choice. And also, when you look at the information and you talk to people, it feels like that’s what happened, so I tried to play the truth as I saw it, right or wrong. I think it’s important to recognize that I don’t judge him either way. I love Philip, do you know what I mean? . . . But the audience will make its own decision. We’ll see how they judge it. I’m a bit nervous about it, really."

But that's exactly what it is: a dramatic choice. So fans of the show shouldn't assume that just because The Crown and its creators have decided to imply that Philip had affairs, means that he really did.

It's a good thing to keep in mind for all of the other historical events covered in the show, whether it's John F. Kennedy and Jackie O's visit to England, or the infamous political sex scandal The Prufomo Affair: as much as the creators of The Crown have tried (and for the most part, succeed) in portraying well-known historical facts and events accurately, the portrayals of more private events and machinations that occurred behind closed doors are most likely driven by creative choices on the part of the showrunners.

The Crown is a historical drama, but it's still a drama, and sometimes the show sacrifices precise historical accuracy for raising the stakes, especially when it comes to the famously private royal family. That doesn't mean it's not a great way to get a better understanding of historical events, and what it must have felt like to live through them. But not everything depicted on The Crown should be taken at face value.

More like this
8 LGBTQ+ TV Shows & Movies Like 'Heartstopper' To Watch On Netflix
By Alyssa Lapid
What’s New On Netflix: 'Stranger Things' & 'Somebody Feed Phil' Return
By Arya Roshanian
'Ghost In The Shell: SAC_2045' Was Only Supposed To Last Two Seasons
By Kadin Burnett
17 Hilarious British Comedies On Netflix
By Sophie McEvoy and Sabah Hussain
Get Even More From Bustle — Sign Up For The Newsletter