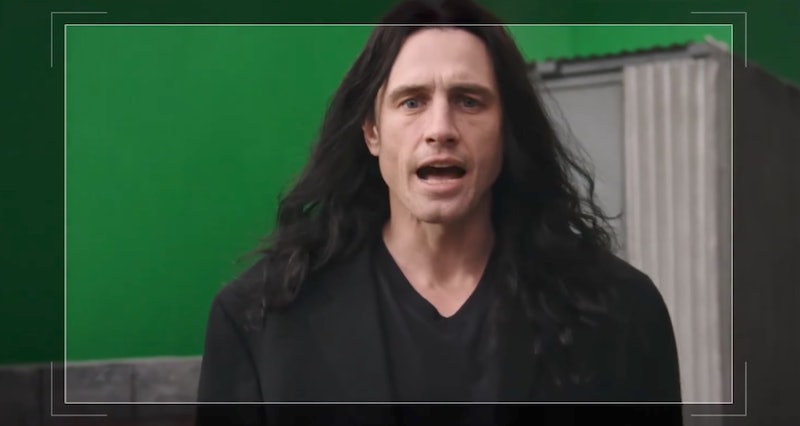 It's hard to get through a viewing of Tommy Wiseau's self-produced movie, The Room, without thinking, "Is this guy for real?" Luckily for everyone, Wiseau's friend, Greg Sestero wrote all about the making of the director's failed attempt at making a romantic drama in his 2014 book, The Disaster Artist: My Life Inside ‘The Room,’ the Greatest Bad Film Ever Made. It was Sestero's book that inspired James Franco to make a movie about Wiseau's cataclysmic flop. But just how accurate is The Disaster Artist? Given that Sestero both observed the entire creation of The Room from start to finish, the movie based on his material tells the true story of what some call the worst film ever made.

Sestero was even involved in the creation of Franco's film, making a cameo as an assistant casting director in the new movie. Wiseau also has a cameo, so it's clear that Franco wasn't making fun of the two men but more so attempting to understand them and the film they made, particularly Wiseau. Sestero approves of how The Disaster Artist told his story, telling the Calgary Harold, “For me, with my love of storytelling, it was just a chance to take something that was considered terrible and turn it into something redeemable... Ultimately, my goal was for a great film to be made out of this story and that’s what happened. It’s a really roundabout way to accomplish something you’re proud of. But ultimately it got there."

Even though both Sestero and Franco tried to tell the whole backstory to The Room, certain aspects of the story might never get revealed. That's because Wiseau seems to like being an enigma. In The Disaster Artist, one of the funniest running jokes is that Wiseau staunchly claims that his accent comes from New Orleans, when it sounds much more Eastern European. In Sestero's book, he doesn't solve the mystery of Wiseau's place of origin, which many Room fans have attempted to do on Reddit.

In a 2013 interview with Rolling Stone, Sestero revealed that he omitted certain facts in the book about Wiseau to honor his friend's wishes. "He opened up little by little over the years. I felt like I shared those bits that he was comfortable sharing and pieced it together. I guess when he is ready to share the rest of those gaps, well, that's his decision," Sestero said.

Other than keeping certain things about Wiseau secret, the story of The Disaster Artist — as shown in both the film and movie — is pretty damn real. "It's as honest as you can get," Sestero told Rolling Stone. But even though he maintains that The Disaster Artist tells the true story about one of the most perplexing movies ever, Wiseau thinks differently.

According to The A.V. Club, Franco imitated his muse's reaction to The Disaster Artist's source material, saying, "[Tommy] said, ‘Greg book only 40 percent true.'" Naturally, this sparked some trepidation for Franco, who said, "It was like, well, that’s what we based it on, so what are you going to think about our movie?"

Luckily for Franco, Wiseau is a fan of The Disaster Artist. Despite noticing some lighting flaws, Wiseau told Franco that he approved of the film, "99.9 percent." The movie might not always portray the director in the most flattering light, but in many ways it redeems The Room and its creator's initial vision by showing how much passion went into the making of the movie. Above all, Franco's Disaster Artist proves that truth really is stranger than fiction. While many people who watch The Room probably can't believe the creator and lead actor in it is even a real person, but he is, and The Disaster Artist celebrates his uniqueness in the funniest way possible.

More like this
You Can Thank Spider-Man For The Meme-ification Of Movies
By Dana Schwartz
What’s New On Netflix: A Victoria Justice Rom-Com & The Return Of David Letterman
By Arya Roshanian
Lisa Marie Presley Reviewed Baz Luhrmann’s ‘Elvis’ Movie On Twitter
By Grace Wehniainen
Elizabeth Olsen's Chris Evans Friendship Update Was Accidentally Hilarious
By Grace Wehniainen
Get Even More From Bustle — Sign Up For The Newsletter