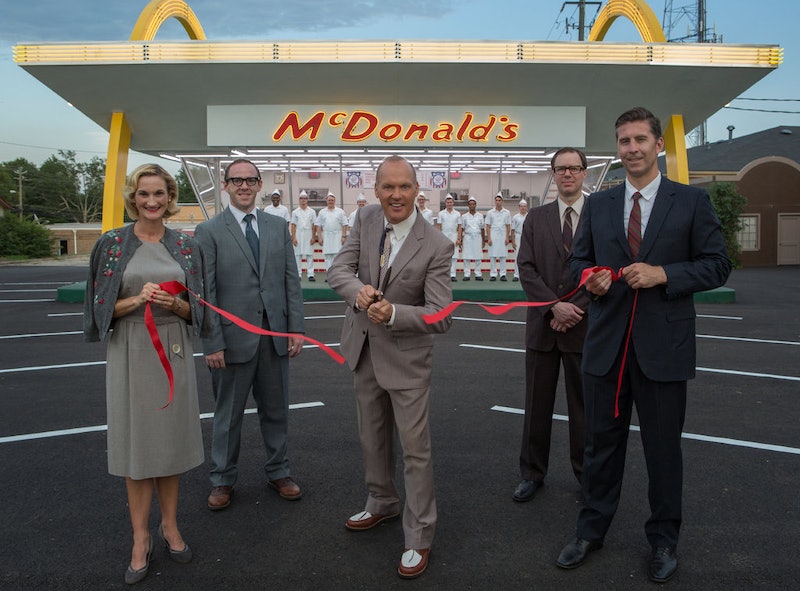 In any historical film, there are going to be some inaccuracies, but these can vary from minor life details to majorly fictionalized events or total personality misrepresentations. With a movie like The Founder, which tells the story of the drama between the men who made McDonald's the enormous company it is today, it seems like staying accurate would be particularly challenging, since there are varying, often contradictory accounts from the major players. The tale the film tells, of an enterprising salesman, Ray Kroc, who grows a small burger stand owned by Dick and Mac McDonald into an empire and makes them into enemies along the way, is largely true, but just how accurate The Founder is is up for debate.

When speaking about the film in an interview with Deadline, director John Lee Hancock describes The Founder less as a traditional biopic of a single man (though Kroc does seem to be the focus) but rather as a biopic of McDonald's itself, with the mega-corporation as the main character. With that idea in mind, it's easy to see how various decisions were made about how to represent the story as truthfully as possible while still making it a successful film.

For example, pretty much everything biographical about Kroc is true. The film portrays him as a business-minded, highly driven milkshake mixer salesman who hadn't quite achieved success when, in 1954, the McDonald brothers ordered an abnormally high number of milkshake mixers from him. Still, he was a man who could recognize a great idea when he saw one. Indeed, Money Magazine reports that a 1973 article from TIME quoted Kroc as saying that he was struck by the brilliance of McDonald's simple, focused menu and quick food prep time. "When I got there, I saw more people waiting in line than I had ever seen at any drive-in," he said, continuing, "I said to myself: 'Son of a bitch, these guys have got something. How about if I open some of these places?'"

From there, The Founder follows Kroc as he franchises McDonald's with wild success and ultimately buys the company and the name McDonald's from the brothers for 2.7 million dollars, though he is not given the rights to the original location. He then, controversially, starts cutting the brothers out of the history of the restaurant and claiming he is the founder. As Money reports, that's all true as well, as is the detail that Kroc was jealous of the McDonald's last name. "What are you going to do with a name like Kroc?" he asked TIME in 1973.

Other details in the film aren't quite accurate, though. For example, though the film indicates that Kroc himself came up with the idea of franchising McDonald's, in fact the McDonald's brothers had already begun franchising the restaurant before they met Kroc. Money reports that they had about six locations by 1954. And while the film suggests Kroc also gave the brothers the idea of the iconic "golden arches," Business Insider notes that the brothers had architect Stanley Clark Meston design them in 1952.

Though it seems that, with Kroc's autobiography Grinding it Out: The Making of McDonald’s, and the ubiquitous nature of McDonald's, the filmmakers would have plenty of historical sources to pull from, it was actually rather complicated for them because of disagreements between Kroc and the McDonald brothers about how various events went down. For example, Money notes that Kroc's biography calls him the founder of the company and says that his McDonald's franchise, in Des Plaines, Ill., was the first McDonald's restaurant ever opened.

One thing that had to be accurate in The Founder, though, was any representation of McDonald's, including branding, iconography, and restaurant designs. That's because, as the New York Times explains, the makers of The Founder were allowed to use McDonald's iconography as long as it was accurate and did not misrepresent the company. So, production designer Michael Corenblith was meticulous about the set design, using "old photographs, blueprints and other archival material" as well as "under the radar" visits to older McDonald's restaurants to get exact measurements. The final representations, including two full-sized working McDonald's restaurants maintained "absolute high fidelity."

You can rest assured that The Founder is a film whose crazy story is in fact pretty darn accurate.

More like this
At 28, Lesley Manville Was Acting, Picketing, & Singing Kate Bush Songs
By Olivia-Anne Cleary
Reese Witherspoon Gave Fans Hope For 'Legally Blonde 3' After This Surprising Movie Inspired Her
By Jake Viswanath
22 Movies On Netflix That Are Perfect For The Whole Family
By Bustle Editors
10 Famous People You Forgot Guest-Starred In The Original 'PLL'
By Brad Witter
Get Even More From Bustle — Sign Up For The Newsletter