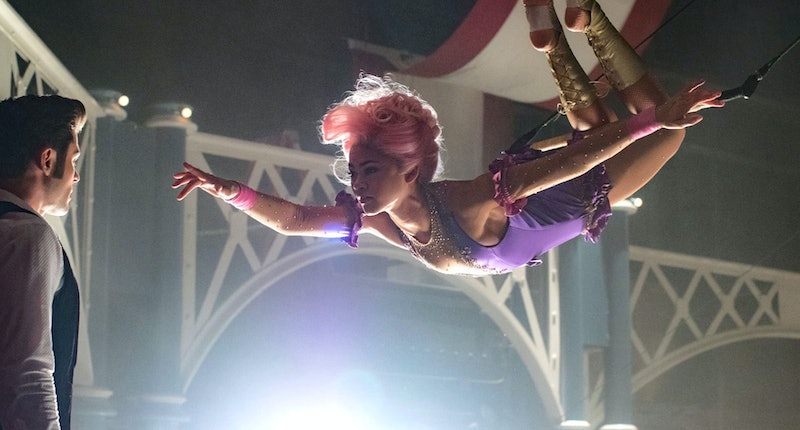 The Greatest Showman, now in theaters, tells the unbelievable true story of circus-founder P.T. Barnum (played by Hugh Jackman). Many events from the movie are based on U.S. history from the mid-19th century, but how accurate is The Greatest Showman altogether? Well, to sum it up, the movie takes a real-life story but adds a family friendly, overly-simplified spin to Barnum's problematic past.

As the LA Times points out, Barnum could have easily been a villainous figure rather than a hero of the film, as he not only conned people throughout his career but he exploited marginalized groups and played upon his audience's racist prejudices of the time to draw crowds. The Greatest Showman lightly touches on some of these issues, but because the movie is meant to be an inspiring and uplifting musical, it mostly glosses over Barnum's dark past.

Jackman — who stars in the film along with other big names like Zendaya, Zac Efron, and Michelle Williams — championed The Greatest Showman for many years before it finally was made by director Michael Gracey. "It is Hugh’s passion piece," Gracey told Vogue back in August. In the same interview, Jackman explained what drew him to Barnum's story, saying, "[It] led to the birth of modern-day America." The actor and producer of the new film continued to laud Barnum, saying, "This idea that you could be who you want to be, that it doesn’t matter where you’re born or what school you went to. And Barnum used a lot of imagination and a hell of a lot of will and mongrel spirit."

It's true that Barnum exemplified a unique entrepreneurial spirit, but The Greatest Showman chooses to frame his tactics in a positive light, as Jackman implied. In the song, "This Is Me," Keala Settle, who plays a bearded woman starring in Barnum's circus, belts an anthem of self-acceptance, which isn't quite an accurate tune for all of the real Barnum's talent.

As both Vogue and The New Yorker point out, Barnum's circus acts in real life included an exhibition of a woman named Joice Heth. Heth's actual identity was an elderly enslaved African American woman who was both blind and, according to Vogue, severely paralyzed, but Barnum flaunted her as a part of his circus as a 161 year-old "curiosity" who had been George Washington's nurse. After she died, Barnum administered a public autopsy that tricked people into believing her remarkable — and fraudulent — age.

The Greatest Showman does lightly touch upon the fact that many of Barnum's acts were scams, as a critic, James Gordon Bennett, plays a big part in providing Barnum an opposing threat. James Gordon Bennett actually was a real critic at the time, and he's one of the most historically accurate aspects of The Greatest Showman. Other real-life characters from the film include the singer Jenny Lind, who Barnum brought on a worldwide tour, and Gen. Tom Thumb (played by Sam Humphrey) who played a big part of Barnum's circus act.

While The Greatest Showman avoids criticizing Barnum's use of blackface minstrel acts and problematic exploitations of disabled slaves, it at least attempts to tell a story about the racial tensions existing at the time. When Efron's character, Phillip Carlyle, falls in love with Zendaya's, an acrobatic performer named Anne Wheeler, the two of them face blunt discrimination by both the upper-class audiences attending Barnum's show and Phillip's family. This perhaps, was easiest way the movie could have tackled the 19th century's racial tensions, as it results in a brave proclamation of defying societal norms, which resonates with the film's overall message.

In the New Yorker's recent article of Barnum, it tells the true story of how the entrepreneur got the money for his museum-turned-circus, which differs from how the movie tells it. According to New Yorker contributor Richard Brody, Barnum published his own newspaper shortly after moving from Connecticut — where he met his wife, Charity Barnum (Williams) — to New York City, which resulted in him going to jail for publishing libel. After he got out of jail, he coerced a businessman to offer him credit after exposing a different company's stock-issuing scheme.

In The Greatest Showman, Jackman's character trades the bond of a ship that had sunk to the bottom of the ocean to get money to fund his museum. While it's not exactly the true-to life story, the movie manages to tell a less confusing version of the historical events.

Not only does the movie fudge how Barnum got the money to start his circus, it applies the same approach to almost every aspect of Barnum's true story. As a result, the movie may not be totally true to life, but hey, it offers a feel-good celebration of following one's dreams and accepting what makes you different. It may not be historically accurate, but in many ways it does what the real Barnum did in the 19th century — entertains.