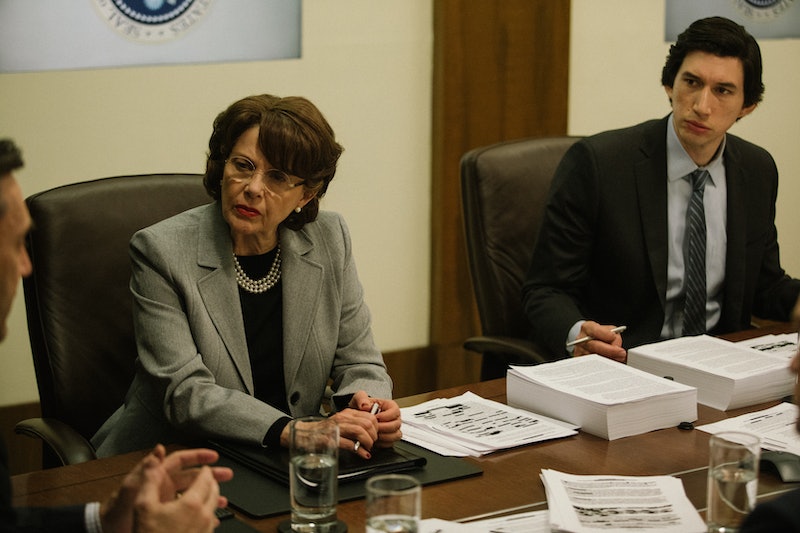 In theaters Nov. 15 and on Amazon Nov. 29, The Report details a political battle with huge ramifications. During the George W. Bush administration, in the aftermath of 9/11, the CIA put "enhanced interrogation techniques" — what many would call torture — into practice on detainees and possibly obfuscating the details and the consequences of those techniques. This resulted in an extensive investigation and report by the Senate Intelligence Committee, which was nearly buried by a bipartisan effort — a process which gets the Hollywood treatment in the star-studded new film. But how accurate is The Report compared to the actual story behind the Senate Intelligence Committee report on CIA torture?

The film features a number of characters whose real-life counterparts played a role in the actual events depicted. Annette Bening plays Senator Dianne Feinstein, who was Chairwoman of the Senate Intelligence Committee during the time the report was conducted. Jon Hamm plays President Barack Obama's Chief of Staff Denis McDonough. And, most prominently, Adam Driver portrays Daniel J. Jones. Jones was a senate staffer who served under Feinstein and was tasked with leading the investigation that led to the report. He is the protagonist and his work is the main focus of the film. Once writer/director Scott Z. Burns was decided on that point, he contacted Senator Feinstein's office to get in touch with Jones.

At an IFP Week post-screening Q&A in mid-September, Jones recalled that Burns "set himself apart" from other creators and journalists who'd tried to speak with him about his report, "in the sense that when Scott called, he was calling about footnotes, about things he’d read in other books, and 'How does it match up with this?' and 'What was happening in March of 2003?'" He added that the two "sort of nerded out" about the finest points of the process, and Jones became involved as a consultant of sorts on the independently made film, advising Burns through the writing process and into shooting.

Preparations for the film, however, didn't begin and end with reaching out to Jones. The director also spoke with Rhode Island Senator Sheldon Whitehouse and former Colorado Senator Mark Udall, as well as former FBI Agent Ali Soufan. All of them were involved in the report in some way and "very helpful" in Burns' research, the director told Deadline. But no one was more helpful than Jones, whom Burns relied on not just for fact-checking ("My very minor role in this adventure was really being a sounding board for Scott on facts," the former senate staffer said at the IFP Week Q&A.), but also for insight on how the government machine operates. "I think that was probably where [Jones] was the most helpful, is explaining why, after something had been voted on and approved, it needed to go through another round of redaction, as well as the role of the CIA and the Executive Branch," Burns told Deadline.

Burns' steadfast research has resulted in a film that strives to be accurate on the most important points. But while the facts of the report depicted in the movie are correct, according to Jones, not everything that really happened made it into the final product. "You're compressing seven years into two [hours], so what do you do? You lose characters," Jones said an appearance on WJLA's Good Morning Washington. "There were lots of senators, democrats and republicans, who did important things on this report that aren't depicted in the film. Many staff that worked really hard that aren't depicted in the film." Some, he told the IFP Week audience, were incorporated into composite characters.

Part of the reason for those omissions is that it was Burns' job to make a film people would want to sit through, and so a few liberties naturally had to be taken. "[Dan and I] had conversations that this wasn’t a documentary and my obligation was really to the audience, and the job that I had was to try and figure out how to do this in a couple of hours and make it really entertaining," the director said. "At some point, you do have to put your relationship with Dan aside and what you’ve learned and you realize that you have a responsibility as a writer and a director to the audience, to your cast."

There are certain challenges involved in making a two-hour piece of entertainment out the backstory of a nearly-7,000 page government report. (Of which, only a 525-page executive summary has been released.) So if you really want to get a full picture of the investigation Jones and his team did, you'll just have to read the report... the parts of it that aren't redacted, anyway.

More like this
Eurovision Has Been Given A Whole New Look Ahead Of Its Liverpool Debut
By Bustle UK
'Boiling Point's TV Sequel Is Set To Deliver A “Rollercoaster Of Emotions”
By Catharina Cheung and Sophie McEvoy
Matt Hancock’s TikTok Is The Most Matt Hancock Thing Ever
By Sam Ramsden
'Knock At The Cabin' May Start Streaming Sooner Than You’d Think
By Jake Viswanath
Get Even More From Bustle — Sign Up For The Newsletter
From hair trends to relationship advice, our daily newsletter has everything you need to sound like a person who’s on TikTok, even if you aren’t.