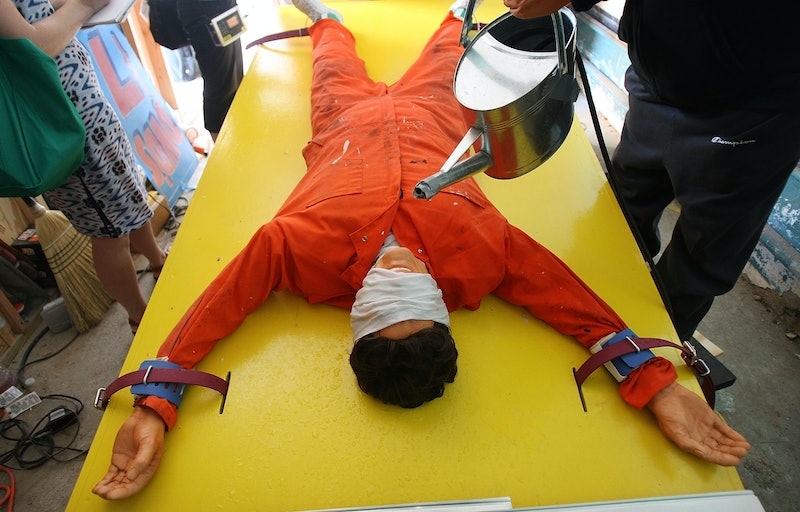 It’s impossible to fully grasp the unrelenting horrors of the 500-page CIA torture report just released by the Senate Intelligence Committee. The torture described in the report took place as part of a CIA interrogation program launched weeks after the 9/11 attacks and overseen by President Bush's administration, including Vice President Dick Cheney and Secretary of State Condoleeza Rice. Detainees were seized and transported to "black sites"— prisons in allied nations where the CIA could carry out brutal abuses that aren’t legal in America.

According to the Senate report, the torture they experienced was not just obscenely brutal — it also didn't work, and it didn't make America safer. As if all that weren't bad enough, the CIA also lied to us during the program, and they're continuing to lie about it now. The agency claimed that intelligence gained through torture helped to catch Bin Laden, though the Senate investigation found that to be untrue.

While it's certainly upsetting to read, it's important to know the most dreadful abuses described in the CIA torture report. The detainees mentioned below were tortured even though they had never been charged with a crime, let alone tried and convicted. They deserve to have these atrocities known, so that we may hold our leaders accountable.

The CIA claimed that rectal rehydration is a “well acknowledged medical technique.” Yes, it was well-acknowledged — in the 1880s. It was replaced soon after 1900 by intravenous rehydration. It's not medically effective, and it’s painful. In other words, it's just torture.

2. The CIA Put Hummus, Nuts, & Raisins Into A Detainee's Rectum

When rectal feeding was last used by doctors — around 1920 — they used liquid foods like eggs or bouillon to aid absorption of nutrients, according to this book published in 1913. What the CIA did with this detainee’s lunch was clearly intended to be humiliating, rather than medically effective.

3. A Prisoner Froze To Death While Chained To A Concrete Floor Without Pants

5. A Prisoner Was Permanently Injured By Stress Positions

6. Another Prisoner Lost His Eye

The Senate report doesn’t explain how Zubaydah lost his eye. However, he told his lawyers that he woke up one morning to find that his eye had been surgically removed by CIA medical personnel. He said he had no idea why, according to a 2011 report from progressive news site Truthout. The CIA claimed that they removed it because of an unspecified pre-existing condition.

The CIA admitted to waterboarding only three detainees. But items left at the COBALT site, including a waterboard and buckets, suggest that others were waterboarded, according to the Senate report.

8. Detainees Were Put In Diapers Or Denied A Place To Relieve Themselves

11. The "COBALT" Prison Was Like A "Dungeon," With Prisoners Kept In Total Darkness

The prison referred to as COBALT in the Senate report is otherwise known as the Salt Pit, a notorious CIA black site in Afghanistan.

12. U.S. Federal Prison Staff Visiting The Prison Were "WOW'ed" By Its Horrors

As Senator John McCain powerfully put it, the abuse detailed here is "a stain on our national honor." Although the torture program was ended by President Obama's executive order the day after he was inaugurated as president in 2009, that order can be retracted by any subsequent president.

That's why the UN has called for prosecutions for top U.S. officials and CIA operatives: it's only by holding accountable the people who planned torture that we can end it once and for all.

Read More About The CIA

The Incoming CIA Director Has A Very Dark Past

More like this
Why Eurovision 2023's Host City Won’t Be Revealed For A While Yet
By Sam Ramsden and Rachel Mantock
Dr. Anna Pou Is Still Practicing Medicine After Facing Murder Charges
By Brad Witter
'Children of the Underground' Subject Faye Yager Now Runs A North Carolina B&B
By Brad Witter
Anthony Templet Wants To “Live Normally” After Killing His Father
By Brad Witter
Get Even More From Bustle — Sign Up For The Newsletter