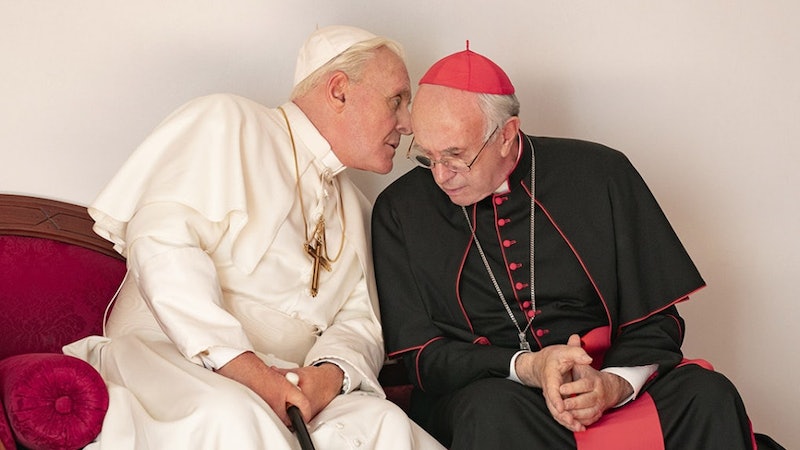 Made your way through Netflix’s festive offerings already? Well, there’s plenty more new content to enjoy over the holidays, including an unlikely insight into the relationship between two popes. Starring Anthony Hopkins and Jonathan Pryce, The Two Popes follows Jorge Bergoglio’s transition from Cardinal to Pope Francis and his succession of Pope Benedict XVI, and how their differing ideologies come into play. But how accurate is The Two Popes?

The film, directed by Fernando Meirelles, initially debuted in late November but became available to stream on Netflix last Friday (Dec. 20). Exploring two highly influential figures of the Roman Catholic Church is quite the feat, so it’s unsurprising true and fictional events were combined to tell this story. You’d literally have to be a fly on the wall in the Vatican to truly capture the conversations that occurred between the two popes, which is why Meirelles and screenwriter Anthony McCarten utilised speeches, interviews, and writings to root the script in realism. “[W]hat they say in the film is what they did say at some point in their lives,” Meirelles told USA Today.

Much like how The Crown creates fictional moments to dramatise events that happened in real life, The Two Popes presents the conversations between Benedict and Francis through the lens of their known positions. So while the context and setting of their meetings may not have actually happened, what they say is truthful to their real character. As Slate notes, the focal point of the film revolves around a secret meeting in 2012 between the two before Bergoglio becomes Pope.

“This 2012 meeting appears to be entirely fictional,” the site writes, as they “did have at least one confirmed meeting at Gandolfo, but it took place in March 2013, after Ratzinger resigned and Bergoglio had already become Pope.” The timing may be a little off, but the conversation did happen and it’s used to underline how their relationship is portrayed on screen.

This is further explored at the end of the film, in an iconic moment where the two are sharing pizza while watching the World Cup. “It would have been a good opportunity, but we really made this up,” Meirelles revealed to USA Today. “The Fanta is real [...] the two popes did meet three times before Pope Francis was elected. So the meetings are real as well. But the pizza I just came up with. That was my thing.”

In the end, the narrative needs to grip the audience, regardless of the subject matter — which is fairly difficult when it revolves around “two men talking about religion”, as Meirelles explained. “It was a big challenge to make it entertaining and engaging."

"But every time I read that scene, I said, ‘It’s not going to work, this is too ridiculous.’ I said, ‘I’m going to shoot it because it’s here but I’m sure we’re going to cut it from the final cut.’ But (Pryce and Hopkins) made it work, they made it emotional. So I was surprised.”

The Two Popes is available to stream on Netflix.