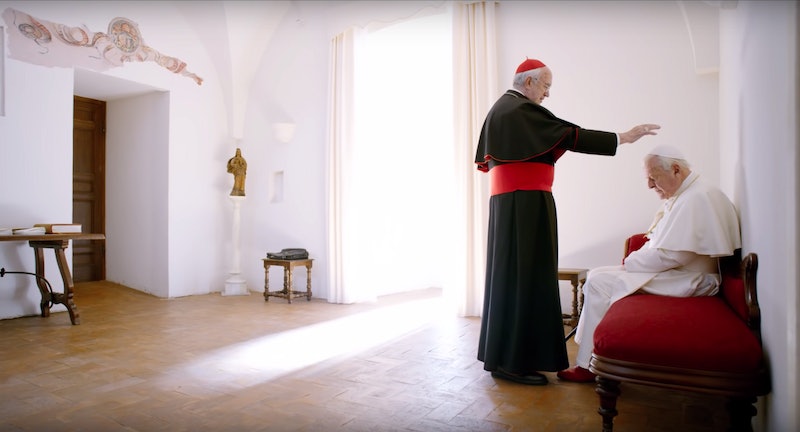 As its name suggests, The Two Popes (in theaters Nov. 27) follows two papal figures in the Catholic Church: Pope Benedict XVI (Anthony Hopkins) and Cardinal Jorge Mario Bergoglio (Jonathan Pryce), the man who would later become Pope Francis following Pope Benedict's departure from the seat. Much of the movie revolves around a conversation shared between the two men, and while the specific words exchanged might not be 100% accurate to true life, The Two Popes is actually based in some truth, as it covers one of the more dramatic developments in recent Catholic Church history: Pope Benedict's resignation and eventual succession by Pope Francis.

Much of The Two Popes focuses on the interactions between Pope Benedict (Hopkins) and then-Cardinal Bergoglio (Pryce), which at times may have looked more like a rivalry, as Pope Benedict maintained a traditionally conservative outlook, which clashes with Cardinal Bergoglio's somewhat more progressive views. In the film, those conversations begin after Cardinal Bergoglio attempts to resign as Argentina's cardinal. But instead of accepting his resignation, Pope Benedict decides to challenge the cardinal, speaking with him about the future of the Church. The popes clash over their beliefs, and that conflict forms much of the drama within the film. Eventually, Pope Benedict urges Cardinal Bergoglio to take his place as Pope.

The beats that make up this story are actually based in truth. In February 2013, Pope Benedict resigned from his position after only eight years of serving as the Pope, having been elected in April 2005. Per TIME, the Pope usually serves until death, and though voluntary resignation isn't unheard of, it is exceedingly rare. According to the Washington Post, only four other Popes have resigned voluntarily in the past 1,000 years. A BBC report of his resignation said that he elected to resign over his declining health. His brother, Georg Ratzinger, shared some insight, saying, "When he got to the second half of his 80s, he felt that his age was showing and that he was gradually losing the abilities he may have had and that it takes to fulfill this office properly." He continued, "Where he's needed he will make himself available, but he will not want to want to intervene in the affairs of his successor."

The Two Popes attempts to cover another rare circumstance: the interactions and relationship between the Pope and the person who would be their successor. As Variety's review points out, the conversations highlighted in the film are mostly dramatizations, as the content of those conversations are "extrapolated," which is to say that they could only be guessed at or assumed based on various news reports and accounts that followed these meetings. Adding on to that dramatization, according to IndieWire's review of the film, director Fernando Meirelles (The Constant Gardener, City of God) took a more humorous tack presenting the two Popes and their conflicting viewpoints, lending a slightly more lighthearted feeling to the proceedings.

So while the entire film might not be 100% true, it's clear that it takes some creative liberties to present viewers with a story that's perhaps more accessible to people who might not be as concerned with the inner workings of the Catholic Church. What's more, those liberties seem to have landed well with critics, as the film currently boasts a solid 89% on Rotten Tomatoes, with generally positive reviews, making it a respectable recommendation if you happen to be interested in movies featuring "odd couple"-type relationships based in some kind of truth.

More like this
15 Intriguing Movies On Netflix That Are Based On True Events
By Mary Kate McGrath, Shannon Barbour and Grace Wehniainen
The 'Hocus Pocus' Sequel Finally Has A Release Date & It Makes Total Sense
By Shannon Barbour and Radhika Menon
Is Austin Butler Really Singing in 'Elvis'?
By Arya Roshanian
What’s New On Netflix: 'Stranger Things' & 'Mean Girls'
By Arya Roshanian
Get Even More From Bustle — Sign Up For The Newsletter