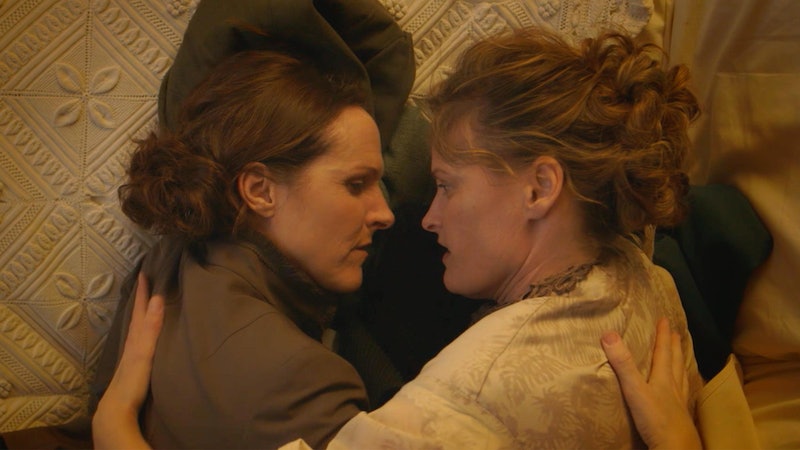 In literary terms, Emily Dickinson is a household name, quite a feat considering only 10 of her poems were published during her lifetime, according to the Emily Dickinson Museum. Her work became much more read and respected posthumously, after Mabel Loomis Todd (the mistress of Dickinson's older brother William Austin Dickinson) oversaw the editing and publishing of her brilliant work, as reported by The Washington Post. But scholars and technology have discovered something quite interesting in the last few decades, and that is Todd's heavy hand, specifically when it came to removing all references to Dickinson's sister-and-law and lover, per Slate, Susan Huntington Dickson, from poems and correspondence. This is all depicted in a new film from Madeleine Olnek, starring Molly Shannon as the oft-referred to reclusive spinster, but how accurate is Wild Nights With Emily?

Olnek, who wrote and directed the historically-based comedy, out April 12, was inspired by a New York Times article published in 1998, according to Deadline. Phillip Weiss's "Beethoven's Hair Tells All!" detailed how new scientific advances gave researchers the ability to review manuscripts such as Dickinson's, and see where and how they were censored. In Dickinson's case, it appeared Loomis removed references to her same-sex romance with Susan.

“I read this article and I was like, ‘Oh my God.’ Her whole life was basically the total opposite of everything you’d ever heard, and I couldn’t even believe it,” Olnek told Deadline.

Historians have long debated Dickinson's perceived homosexuality. Martha Nell Smith, an English professor at the University of Maryland, was one of the first to touch upon Dickinson's more-than-friendly relationship with Susan in her book Rowing in Eden: Rereading Emily Dickinson. The New York Times story that inspired Olnek asserts that Smith and her co-editor Ellen Louise Hart found evidence of the highly-private relationship that "several generations of scholars ... were bent on ignoring, slighting or censoring." Smith was among those using infrared technology to prove Loomis's literal erasure of the two women's love as evinced in recovered handwritten letters and poems dedicated to Susan. During the editing and publishing process, the New York Times says, "someone crossed out portions of Emily's work with pen and ink — or sometimes lifted entire words off the linen page with a sharp blade." Smith believes it was Todd, "the first to shepherd a volume of Emily's poems into print."

But Smith wasn't the first to bring this idea to light. Rebecca Patterson’s 1951 Riddle of Emily Dickinson posited that Dickinson and Susan were lovers, though a 2010 New York Times story alleges that homophobia kept anyone from taking Patterson's claims seriously.

"Patterson, who died in 1975, took a lot of heat for her book," Holland Cotter wrote in the Times. "Scholars demolished its thesis; critics scorned its True Romance style. But the real problem, I suspect, was that no one in that blacklisting era wanted to hear about same-sex love, particularly in connection with a writer enshrined as an American Classic."

Yet despite the efforts on behalf of Patterson and Smith (who has started to reverse Todd's edits, the Times reports), most are unfamiliar with the revelations and true story. Wild Nights With Emily, though, shows just how intense the relationship between Dickinson and Susan (played by Susan Ziegler) was, as well as how Todd (Amy Seimetz) attempted to alter history, successful for several years.

Olnek found that not only was Dickinson's sexuality often erased from her narrative, but replaced with one that made her seem humorless. All of this served as inspiration for Wild Nights With Emily, which is a satirical representation of Dickinson and Susan's romance.

“I think it was so interesting that she was sold to the public as some spinster recluse who was so reserved, when in reality, she was aggressively trying to get her poems published, she had a lively romantic life, she was funny,” Shannon told Deadline. “I just found the whole story so fascinating, why people need to make women like they’re some kind of broken-hearted victim—that that’s easier for us to digest, versus a woman who’s really not that at all.”

"I felt like what's been missing from portrayals of Emily Dickinson has been her great sense of humor and warmth," Olnek told WUWM. "[She] was someone who was curious, who was involved in life, who had a garden, who loved her niece and nephew, who played the piano ... This is a lively person. You'd have to be to have written that much and written that well."

Wild Nights with Emily includes the uncensored versions of Dickinson's odes to her love, as well as her likability, cleverness, and the happiness she experienced during her lifetime, all of which are at odds with the mythos of her being a single, sad, recluse.

"This relationship was so central to Emily’s life," Olnek told AMFM Magazine. "Not just as a human being but as a writer. Her work, her meetings with Susan. Susan was her reader, her champion, her editor. She really had a life as a writer because of this relationship, which sustained her. Every artist needs some form of sustenance and the myth that we’re peddled about Emily Dickinson, which she was scribbling this stuff in her room and just on her own, and she didn’t want anyone to read her. But no — every writer has the desire to be read and no one works that hard on their writing if they really wanted no one to see it and no one can work forever without some recognition or acknowledgement or some encouragement or something."