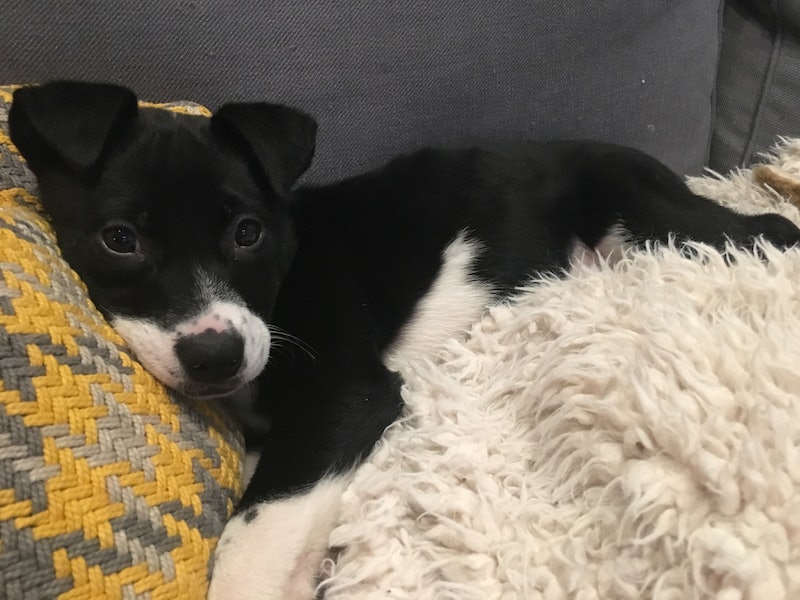 Two weeks ago, my husband and I adopted a puppy. My husband has been trying to convince me to get a dog for years, but I always put up a fight. As much as I love dogs, I always came up with reasons why we shouldn't become puppy parents:

1. We don’t have enough space (even though we recently moved from our apartment to a townhouse).

3. We can’t leave him alone all day (even though I just started working from home).

There was always some new reason why a dog seemed out of place in our lives.

In the weeks following President Trump’s inauguration, I began to reconsider. The constant barrage of negative, false, and sometimes downright bizarre news coming from the Trump administration has been wearing on me. Suddenly, a puppy didn’t seem like such a bad idea, and science seemed to agree.

According to the Center for Disease Control and Prevention, pets can decrease their owners’ blood pressure and cholesterol levels. Add to that reduced loneliness and increased socialization, and it’s no wonder pets are considered therapeutic. In fact, playing with a pup can increase serotonin and dopamine levels — chemicals that make us feel happy and calm.

But adopting a puppy also seemed a bit ridiculous to me. With all of the news and issues to keep track of right now —from immigration, to women’s rights, to national security — how in the world should I be expected to keep track of an actual living creature, as well? How could that possibly be as important?

But my husband, with the help of my very convincing sister, broke me down. So two Saturdays ago, we went to the local shelter and picked up a little pup we had been eyeing. He is a 10-week old beagle/American bulldog mix named Clark, and I am absolutely head over heels in love with him.

Chances are, I’m not the only one feeling buoyed by the presence of a furry friend during this otherwise stressful time. According to the National Institute of Health, at least two-thirds of homes in the US now include a pet as part of the family.

However, Kristen Jacobson, PhD, an associate professor of psychiatry and behavioral neuroscience at the University of Chicago who specializes in the relationships between humans and animals, cautioned against considering a pet as a cure-all for emotional distress.

“The common narrative is that pets are great,” she told Bustle. “When you start digging into the scientific literature, it becomes a little more problematic.”

She said studies extolling the health benefits of pet ownership began in the early 1980s, when patients who underwent major cardiac surgeries were evaluated a year later. Those with pets showed lower mortality and complication rates, which those conducting the study hypothesized was due to a decrease in stress attributed to the pets.

Jacobson said she has conducted work in which she’s found petting a dog — even one that does not belong to you — for just a few minutes can reduce cortisol, which causes stress. She also noted a couple of small studies in Japan linked interaction with pets to an increase in oxytocin, a neuropeptide tied to bonding that’s often referred to as the “love hormone.”

“There’s clearly strong anecdotal evidence…and some of that is being borne out by the scientific studies,” Jacobson said. “The flip side to that is a lot of studies are often just based on the pet owner’s self reporting of how they feel.”

However, she said more studies are starting to institute more focused measurements of things like cortisol levels and blood pressure and include control groups.

If I were to add my own anecdotal evidence into the mix, I would say that petting my new puppy most certainly makes me feel less stressed, especially when he walks around in a circle, lets out a little puppy sigh, and collapses into my lap. And with an estimated 7.6 million dogs and cats entering shelters every year, it’s always a good time to adopt.

In the broader scheme of things, it still feels silly to expend so much energy worrying that crate training is so much harder than the internet makes it seem, or that I have no idea how to teach a small animal that the world will not end just because we are not physically touching at all times. Every time he barks, cries or whines, I worry, piling it on top of the constant stream of anxiety I'm already feeling about whatever is going on in Washington D.C.

It feels almost selfish, pouring love into a relationship that helps no one but my puppy and me. But I think that’s what makes it so important. It’s a good reminder that love for love’s sake is still valuable. Loving our friends, our families, our pets, and ourselves in the most basic way is what gives us the energy to channel love into bigger challenges we face. You can think of the love you give and receive in simple ways as the fuel that keeps you battling through the onslaught of negative, and sometimes downright frightening, news we consume on a daily basis. Love is the encouragement you need to keep fighting for whatever causes you hold near to your heart. Love provides the courage just to open your Twitter feed in the morning.

Just to say, “I see you and I care about you,” for no other reason than because you can, is significant. It builds us up and creates solidarity and reminds us of our boundless capacity to love during a time that has made a lot of us feel cynical. Love of any kind fights off hatred on a broader scale—even if it’s just me giving my puppy a snuggle and telling him I love him — because it reminds me of how much love I have to share, and how instrumental that knowledge is in fighting hate. We’re just a few short weeks into the Trump administration. We’re going to need a lot more love over the next four years, and it all counts—every quick text to your best friend and every lick on the face from your puppy.