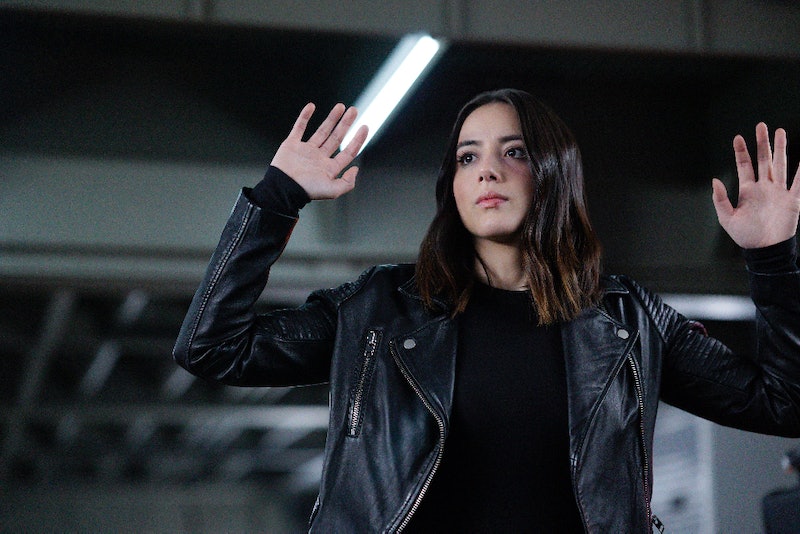 At the end of the episode, the gang is enjoying some quality diner time, when they're all (presumably) arrested. They expected this, after General Talbot was shot by a Daisy LMD and Mace was killed in the Framework. However, I don't think it's the United States government that takes them in. These suits used a device that seemingly froze all of them in place. One of them says to hurry, because the "window" would be closing soon. The window to what, exactly?

The only clue comes in the next scene, a flash forward to Coulson waking up in a cell. He already has a routine. After looking out a window to the final frontier, he tells himself to "stop sightseeing and get to work." We don't know where he is, or whether or not he was the only one taken. I would assume that the entire team is together, this show has already stranded one character in space before, but you never know. Agents of S.H.I.E.L.D. loves to separate people, especially when they've just been reunited.

What is this space prison? No, it's not the Phantom Zone. That's DC comics. After briefly perusing some Marvel prisons online, I'd guess that this is Prison 42, also known as Project 42, Wonderland, or Fantasy Island.

Since the show won't return until midseason, it's going to be a while before we find out why Coulson and potentially the other agents are in space, and who took them. I'd love to know who else has it out for our heroes, why, and what kind of work they're making prisoners do in the middle of an asteroid belt.

The upside to that is that a lot's going to happen in the Marvel Cinematic Universe between now and Agents of S.H.I.E.L.D. Season 5. By the time the show returns, we'll have all seen Spider-Man: Homecoming, The Defenders on Netflix, The Inhumans on ABC, and likely Thor: Ragnarok as well. If it's directly connected to any of these things, I would guess it's something to do with Asgard or the Kree — just because they're already extraterrestrial. Hopefully the connected universe can offer some hints and theories about this new chapter on Agents of S.H.I.E.L.D.

More like this
Wait, Did Wanda Die In 'Doctor Strange And The Multiverse Of Madness'?
By Arya Roshanian
Elizabeth Olsen Is Better Off Without Us
By Chloe Foussianes
One Powerful Quote In 'Doctor Strange 2' Is Going Viral On Twitter
By Alyssa Lapid
20 Photos From The 'Stranger Things' Season 4 Premiere To Make You Feel Old
By Alyssa Lapid
Get Even More From Bustle — Sign Up For The Newsletter