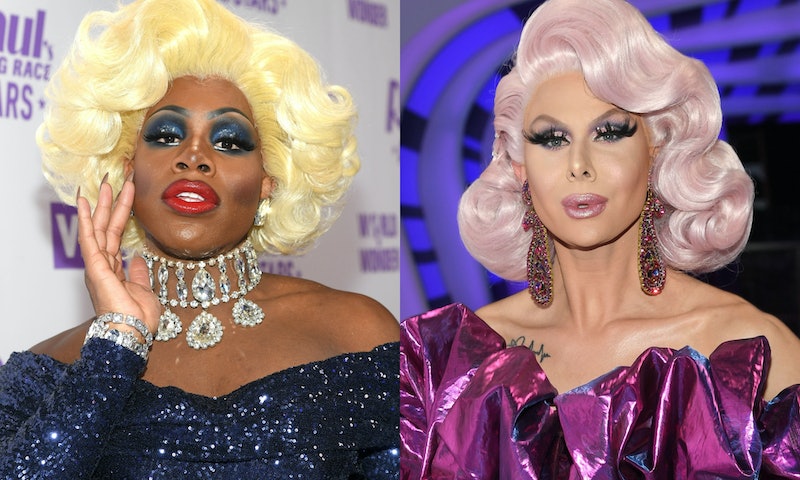 When they applied to appear on RuPaul's Drag Race, Trinity the Tuck and Monét X Change had no clue that not only would they make it to the All Stars hall of fame, but they'd go down in the show's her-story. Following a twist-packed season, they both won All Stars 4 in an unprecedented — but deserved — double crowning. It was a hard competition to navigate from start to finish, but thanks to all the growing they've done since first strutting into the werkroom, Trinity and Monét came out on top.

When Monét joined All Stars, she was fresh off of Drag Race Season 10, which she says put her in a unique position. She was prematurely eliminated from Season 10 due to some silly mistakes and lackluster runways, and because she was such a rookie compared to some of the other queens, she says she was at a bit of a disadvantage.

"[Before the show] I was working six nights a week, trying to pay my rent, trying to live in NYC ... [I was] definitely at a disadvantage because [I hadn't] been working as long as these girls," Monét tells Bustle. "All Stars is almost harder than [Drag Race] because, you know, people come back to All Stars after their seasons and they have budgets and they work really hard to come in with guns blazing."

But ultimately, it was exactly that underdog mindset that got her through — she was focused on doing her personal best, rather than rising above everyone else, and it paid off. "I don't really feel like I had any challenges, besides getting out of my own head in episode one, shaking off those first day jitters, and being ready to go balls to the wall like I was for half of Season 10," Monét continues. "After being saved that first episode, and not doing a great job singing like I wanted to, I was like, 'Hey, snap out of it. You're here at All Stars. You're f*cking fierce.' And I didn't let anything else bother me or scare me. I just wanted to do a good job for me and NYC."

And Trinity had a similar mindset. For her, All Stars was all about expanding her idea of what makes a good performer and learning along the way. "I come from pageants where everything is in a box. Getting to experience this has just really opened up my eyes to the possibilities of drag," Trinity says. "I'm just so excited that I got to show different aspects of the entertainer I've become. You never stop learning. I've been in the business for 16 years and I hope that I continue to always evolve."

The win is particularly monumental for Monét because it makes her "America's first chocolate all-star," as she puts it. "Everyone always remembers the first, and I'm super proud and super happy with the work I've done," she says. "I'm gonna take this crown and keep on doing what I'm doing and continue helping the mainstream of drag in a positive way … I want to be the X Change in the world I want to see. To me [drag is] such a life-changing force, and it's something that's completely changed my life. And I want to share that with more of the world."

But neither Trinity or Monét's journeys were easy. Amid a particularly unpredictable season, Trinity found herself facing many emotions she didn't anticipate, and allowing herself to feel those while competing, she says, was a challenge.

Each week, the winning queen was tasked with choosing the fate of those in the bottom two, which was always difficult. Further intensifying all of those feelings, Ru brought in all of the contestants' "best Judys," an ode to Judy Garland, during week eight. Trinity's best Judy was her partner.

"That is emotional, being sequestered for the entirety of the show and getting to see my partner, that brought a lot of emotions," she says. "Because I had missed him and I didn't realize how much I missed him until he walked through the door, which was very unexpected, something very much needed. It was such an emotional roller coaster, and that is something that was my biggest challenge to overcome. And I feel like I did my best to show people the person behind the costume."

In the end, it was staying true to who they are that earned both queens the crown. "One thing I want people to really remember me for is being unapologetically myself — the good, the bad, the ugly," Monét says. "Being yourself will always reign true and a lot of people will want to get to know you."

Hopefully, that means more of her and Trinity in the future, but one thing's for sure: after their season of All Stars, they can say they're prepared for any twist, on or off-screen, that comes their way.