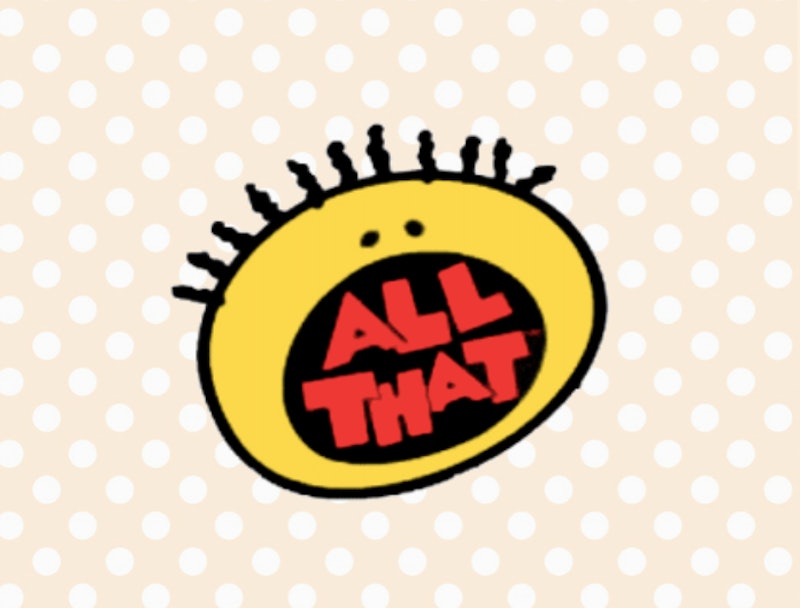 It’s not an exaggeration to say that the Nickelodeon sketch comedy series All That truly exemplified what it meant to be a ‘90s kid. With an opening sequence of everyday kids jumping around in color-block streetwear and jamming out to the irresistibly catchy TLC theme song, and musical guests who personified everything hip and cool at the moment, the show goes down in history as an international favorite.

With a concept described to Bustle by cast member Alisa Reyes as "The Mickey Mouse Club mixed with In Living Color and Mad TV with a little bit of Round House,” the show had the perfect concoction of early '90s inspiration to thrive. But All That's diversity made the must-watch kids' show stand out way ahead of its time. All That gave comedic greats such as Saturday Night Live’s Kenan Thompson, Wild ’n Out’s Nick Cannon, and Gabriel “Fluffy” Iglesias their breakout roles. It pushed the envelope with skits such as “The Inconvenience Store” and “Miss Piddlin,” which featured young Black comedians playing characters who represented everyday folks in our communities that we knew and loved in real life. But most importantly, it gave kids who dreamed of being performers one day the inspiration and representation they needed to keep going.

As the show approaches the 25-year anniversary of its premiere this coming April, Bustle spoke to three of the show’s beloved cast members, Reyes (Seasons 1-3), Christy Knowings (Seasons 4-6), and Danny Tamberelli (Seasons 4-6) about what it was like to star in one of the most nostalgic TV shows of the 90s, the memories they made with musical guests, and the incredible legacy the show ultimately holds today.

Life On Set Was A Kid’s Day Dream… And Nightmare

[Editor’s Note: From Seasons 1-3, the show was filmed at Universal Studios in Orlando, Fla. until moving to The Nick on Sunset Studio in Los Angeles, Calif.]

Alisa Reyes: “It was awesome shooting the show on the Nickelodeon sound stage at Universal Studios. Every day we had a theme park tour go through our makeup room...people on this tour could see us through a glass window and wall when we got our hair & makeup done. We also used to sneak out on our lunch break and go on rides in the theme park, so I guess life wasn't too shabby for a kid.”

Christy Knowings: “My favorite moment on set was when I started to do this character in Season 6 named Gloria Bankhead. She was an over-the-top Martha Stewart, I had never played any character like her! I just remember being on set and being her all-day long. Everybody loved it! The writers, the stage managers, everybody was just like, ‘Hi Gloria!’ Gloria Bankhead was my favorite character to play. She was on set like that all the time. It was fun to just be in character like that, even when the cameras weren’t rolling. It’s what I’d do constantly.”

Danny Tamberelli: “A few memories [on set] come to mind … but the Nick On Sunset studio was totally haunted. I used to hear footsteps in the rafters and I personally saw the water turn on in the men's bathroom by itself.”

The Iconic Musical Guests Brought The Best (And Most Hilarious) Memories

DT: “I got to play bass with Wyclef Jean, so that memory is pretty high up there...but I also got scolded for ruining a musical performance take because I was staring at Britney Spears' lower back tattoo—sorry, not sorry. There was also the time Phil Collins took his kids to see the show, and in one of the sketches, I was a caveman. I got star struck and went right up to him forgetting I was in costume. I startled him and his children pretty good. It was awkward for a second, but we worked it out.”

CK: “And I remember when 98 Degrees came, they were backstage and I was guessing their zodiac signs and fake reading their palms. They got a kick out of that. We also met the Spice Girls and one of my cast members kept messing up on his lines because he was so excited to meet them. He could NOT get his line out, but they were so sweet about it.”

AR: “We were a melting pot of ages and nationalities—let alone different cultures. At the time, I was the only one from New York. Everyone else was from Cali, ATL, and Chi-Town when it came to my cast. We were all so different but the formula and our frequencies just worked. We had the right recipe. The alignment was perfect. We shared different views, religions, and beliefs BUT at the end of the day, we always came together as a collective and put our best foot forward and put on a fun and entertaining show for all ages.”

CK: “The diversity in the cast made a huge difference because there were things that the writers just couldn’t write in … little nuances that they were not aware of, especially from myself and Keenan. I’m from the Bronx and Native American Afro-Latina, so I was able to bring so much to the table. We would bring cultural nuances and it was celebrated. With ‘Inconvenience Store,’ there was a cultural aspect that people are more familiar with now, but back then they really weren’t. But it’s cool that it was celebrated in that way, it was a lot of fun.”

DT: “'90s kids love All That. It was their show. It was based in hip-hop and urban culture from the jump, so I think that opened the door at first. Having role models like Kenan, Kel, Nick, and Christy helped a whole lot, too. Funny, kind, outspoken, and relatable kids who made you think, ‘Hey, maybe we can do that, too.’”

CK: “People tell me, especially Black ‘90s kids who were watching for my seasons, they’re like, ‘We really paid attention to you because you were the only Black girl!’ I was there to represent them in a way and I didn’t even realize it at the time because social media was not a thing. You didn’t have that kind of contact with your fans. But everyone had a special connection to the show, everyone remembers the logo and that very iconic theme song sung by three Black women. It’s very interesting to grasp it all from that perspective since I was the only woman of color when I joined.”

AR: “It was a pure reflection of the decade, it showed it didn't matter what race you were … you could always have fun. We had a cast that allowed kids of all nationalities to be able to relate to us. I am Irish, Italian and Dominican, and a few other things so I am just one person, but with six other kids of different backgrounds, the sky was the limit for kids being able to relate.”

The Legacy Of The Show Is Still Significant Today

CK: “All That showcased the unity that we all wanted, needed and still need in a very humorous way. We brought each other together in a very lighthearted way. With Amanda [Bynes] and I doing ‘Whateverrr!’ you didn’t see a Black girl and a white girl, you just saw these two insane girls who loved the same guys. We both loved Leonardo DiCaprio and we both loved Kobe Bryant! I think we pushed a lot of boundaries.”

AT: “I hope that fans new & OG continue to fall in love with the iconic and nostalgic show All That that is still re-airing on Splat and Nickelodeon and that was a show for all ages made for kids but enjoyed by adults as well.”

DT: “It's the SNL for kids. A show that brought everyone together with jokes catered to all kids, not just some. I would hope that it made people who might not have had much interaction with people of color understand that we are all humans—and that all we need to laugh, too.”

More like this
Alicia Silverstone Has Recreated An Iconic 'Clueless' Scene
By Frances Stewart
Jennifer Aniston Is Still Wearing That 'Friends' Dress She Stole From Monica's Closet
By Jake Viswanath
Christina Aguilera Had A Mini "Lady Marmalade" Reunion With Mya At LA Pride
By Jake Viswanath
The Secret To Taylor Swift’s Fringe, According To The Experts
By Orla Pentelow
Get Even More From Bustle — Sign Up For The Newsletter