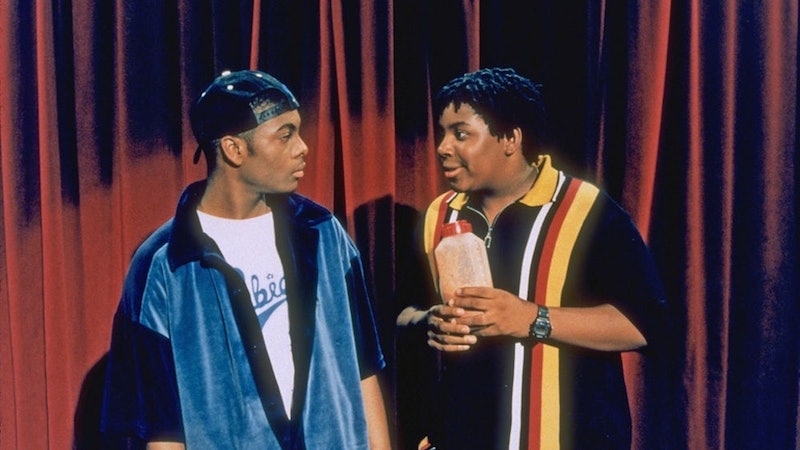 All the dudes should be very excited about the news that the All That revival is turning into a Kenan & Kel reunion. Following the announcement that All That was coming back to Nickelodeon, Kenan Thompson made another announcement that will make '90s kids who grew up watching SNICK very nostalgic and possibly very thirsty for some orange soda.

UPDATE: On Thursday, Feb. 21, Mitchell confirmed the news that he would be returning to All That as an executive producer with Thompson. He shared a video on Twitter announcing his involvement, writing, "#AllThat is back!! Get ready! Get set! My bro @kenanthompson and I are about to take this to a whole new level! Now that's All That!"

EARLIER: On Tuesday morning (Feb. 19), Thompson tweeted that he and Kel Mitchell would be reuniting for All That. Not onscreen, but behind the scenes. "The return of All That is upon us!!!" Thompson tweeted along with a photo of All That's producer Brian Robbins "making the official announcement in NYC today!!! I’m producing alongside my brother @Iamkelmitchell !!!"

Mitchell was just as excited to share the news that he was returning to the show that gave him his big break, tweeting minutes after Thompson. "The cats officially out the bag. Let’s do this @kenanthompson," Mitchell tweeted. "It’s bout to be Lit! We Back!"

This is the first time the Thompson and Mitchell will be working together since Kenan & Kel ended in 2000. While the two reportedly fell out of touch following the finale, they were able to reconnect in the last four years, even appearing onscreen together for a Good Burger sketch on The Tonight Show. “It was just this emotional moment,” Mitchell told The Huffington Post of their late night appearance. "It was just us."

The fact that these two are back together again after all these years is what makes Nickelodeon reviving All That all the more exciting. This new version is for the current generation of teens and tweens, but it's from the people who made it a hit 25 years ago. The sketch comedy series, which originally ran from 1994 to 2005, introduced fans not only to Kenan and Kel, but also to Amanda Bynes and Nick Cannon. And the hope is that this new iteration will introduce the world to even more young comedic talent.

"We think there’s a great opportunity to find the next pool of stars," Robbins told Variety when the revival was announced on Thursday, Feb. 14. "We want to bring the show back in a real fun way. This summer, we are going to bring back a lot of the original cast and the cast through the years, and let them introduce the new cast of All That to the world."

In an interview with Page Six over the weekend, Thompson teased which members from the original cast might be back, and also gave the first indication that Mitchell would be one of them. “Whoever’s down to come do it, we would love to have them in my opinion,” Thompson said. “I know Kel [Mitchell’s] coming back, and I remember working close [sic] with Josh Server as well. I think all the old cast members should come support the new cast members. That’s just how it should go.”

All That is actually just one of the '90s classics Nickelodeon is bringing back. The network announced that they're working on a movie based on the horror anthology Are You Afraid of the Dark?, out October 2019. They're also planning to bring Rugrats back as an animated series and a live-action movie to be released in November 2020.

So does the All That revival mean Thompson and Mitchell are closer to giving fans a Kenan & Kel reunion? Still unclear, but two years ago, Thompson said he was interested in reprising the role. "I wish we could just pick up and do Kenan & Kel: The Grown-Up Years," he told Entertainment Weekly in 2016, "getting everyone back working together. I feel like it would be an awesome moment for everybody."

But, for now, fans will just have to be happy with this awesome moment that brings Thompson and Mitchell together behind the scenes.

More like this
22 Movies On Netflix That Are Perfect For The Whole Family
By Bustle Editors
Does 'Locke & Key’s Ending Mean There Could Be A Season 4?
By Sophia Moore
'The Sandman’s Ending Is A Departure From Neil Gaiman’s Comic Book Series
By Kadin Burnett
Netflix Just Rebooted A Classic ‘90s High School Drama
By Maxine Harrison
Get Even More From Bustle — Sign Up For The Newsletter