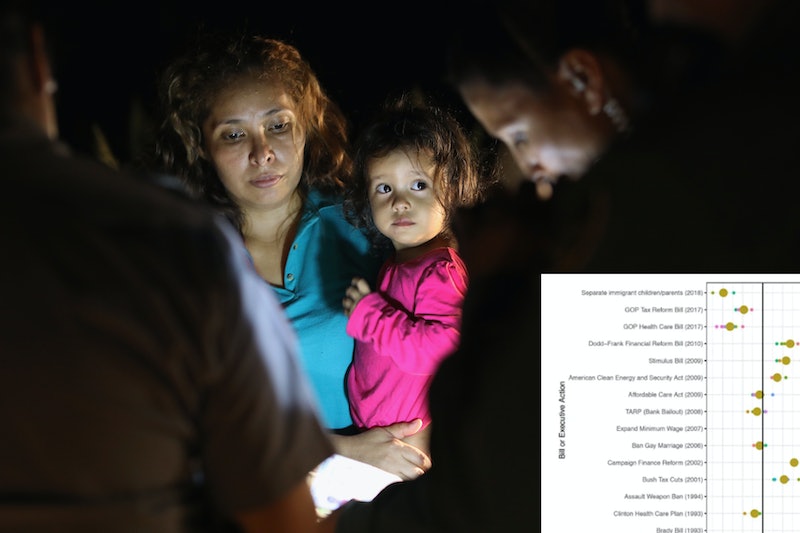 Presidents and other lawmakers can't expect that every policy they put forward will be a winner, but it's not every day that a given policy's unpopularity becomes headline news. Trump's family separation immigration policy is officially the least popular policy in recent memory, even beating out recent unpopular legislation like the 2017 Republican tax reform bill and the 2017 Republican health care bill.

According to a study put together by George Washington University associate professor Chris Warshaw and published in the Washington Post, the 2018 policy of separating immigrant children from their parents at the border is supported by only 25 percent of Americans. Calculating and comparing the net support of various policies — which the Post explains means subtracting the percent opposed from the percent in favor — puts the policy even farther behind all of the rest.

Warshaw assembled graphs charting the average support rate of several different policies calculated from numerous polls, and it's clear that this policy is in a league of its own. However, it's also notable that all three of the least popular policies or pieces of legislation in Warshaw's calculation are all products of the Trump administration.

Warshaw put together a graph that tracks overall approval rating of various controversial policies stretching back to the George H.W. Bush administration. In that graph, it shows that the 2017 health care bill put forward by Republicans was actually even less popular than this immigration policy. However, there were fewer people who disapproved of that policy, so the graph showing the net support shows you that its approval rating was actually higher, making the family separation policy the least popular of all.

The tax reform bill that Republicans rammed through Congress at the end of 2017, which, as the Washington Post explained, gave massive tax cuts to the wealthy and to corporations, also hovered right above the previous two unpopular policies. In order to find ones that compare in unpopularity to those three, you have to go back to Clinton's health care plan from 1993, the bank bailout at the beginning of Obama's first term in 2008, and the Affordable Care Act.

According to the Post, the family separation policy is significantly less popular than two of the other Trump immigration ideas that have drawn outcries and consternation: the now-infamous border wall and the proposal to temporarily ban foreign Muslims from entering the U.S.

Despite all of the outcry against the family separation policy, Trump and the other members of his administration have shown no sign of stepping back from it, as CNN reported. In fact, Vogue counted five excuses the Trump administration has given for its enforcement of the policy, including falsely blaming it on the Democrats and saying the Bible supports it. In reality, the family separations are a direct result of the zero-tolerance policy that Trump attorney general Jeff Sessions announced would be enacted beginning in April of 2018.

Congress could push through legislation to end the policy or limit the family separations, but NBC News reported that that is unlikely to happen very quickly. The easiest and fastest way for the family separations to end would be for the Trump administration to simply rescind the policy that it enacted. The Washington Post notes that Trump seems to have actively chosen to promote this policy despite its unpopularity, so it's unclear what political results it could have for the Republican Party as a whole. So far, the photos and other documentation of children in detention centers have provoked consternation and outrage from people on both sides of the aisle — and, as Warshaw showed in his graph, this is reflected in the polling taken on the issue as well.