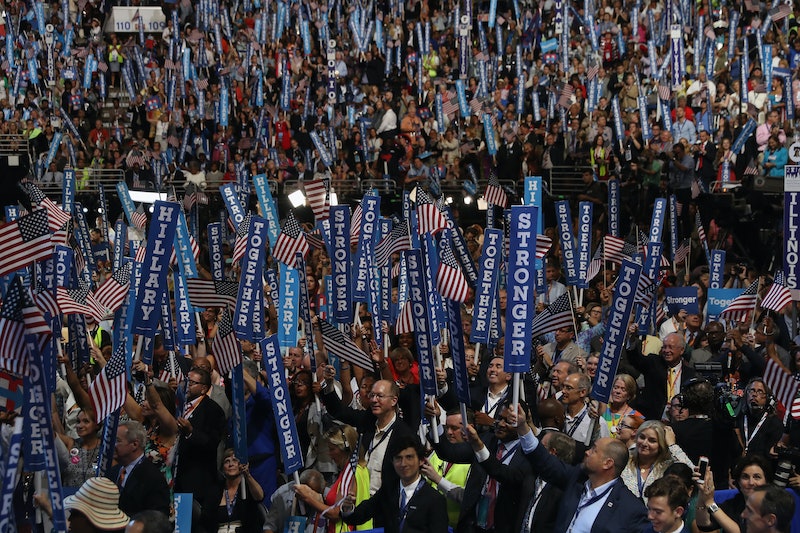 At the 2020 Democratic National Convention, delegates from around the country will come together to select a Democratic presidential nominee. Ahead of the convention, you may be curious how DNC members are elected and if 2020 convention involvement has any bearing on who becomes the party's nominee. As it turns out, all of Democratic National Committee (DNC)'s members play a very specific role at the convention, though their power to influence its outcome is somewhat limited.

According to the DNC's website, the organization has approximately 447 members nationwide. It notes that members are generally divided into four categories: state-elected members, state chairs and vice chairs, at-large members, and elected official and organizational members. Members are elected in several ways, depending on what category they're in.

The DNC indicates that its state-elected members are typically selected through a "Democratic party process held in each state and territory." The organization's website says this process can vary from state to state, as each state's party establishes its own rules for selecting DNC members. For example, as the DNC describes, some members are elected as part of state Democratic primaries, while others are elected through State Democratic Committees or State Conventions.

As NPR reported, in August 2018, the DNC voted to limit the influence of superdelegates, deciding that superdelegates can now only influence the selection of a presidential nominee if there isn't a clear nominee after the first round of voting. As a result, the role of DNC members at the 2020 convention will likely be much more limited.

However, as Yahoo! pointed out, considering the number of presidential contenders currently vying for the Democratic nomination, it's possible there won't be consensus after a first vote. In that case, superdelegates would have a say in the outcome. Though, the outlet also noted that, despite the amount of Democratic contenders, many DNC veterans still think the prospect of a second round vote is improbable. "When you look at the number of candidates, it’s possible … but it’s unlikely,” Larry Cohen, a DNC member and chairman of the board at Our Revolution, a political organization inspired by Bernie Sanders' presidential campaign, told the outlet.

Overall, as the 2020 Democratic National Convention approaches, DNC members — who are also elected in presidential nomination years — will likely approach the event somewhat differently than they have in the past, considering the newly-reformed role of superdelegates. Though, depending on how the Democratic candidate field evolves, there's a chance that these superdelegates could still play a significant role in determining the Democratic presidential nominee.