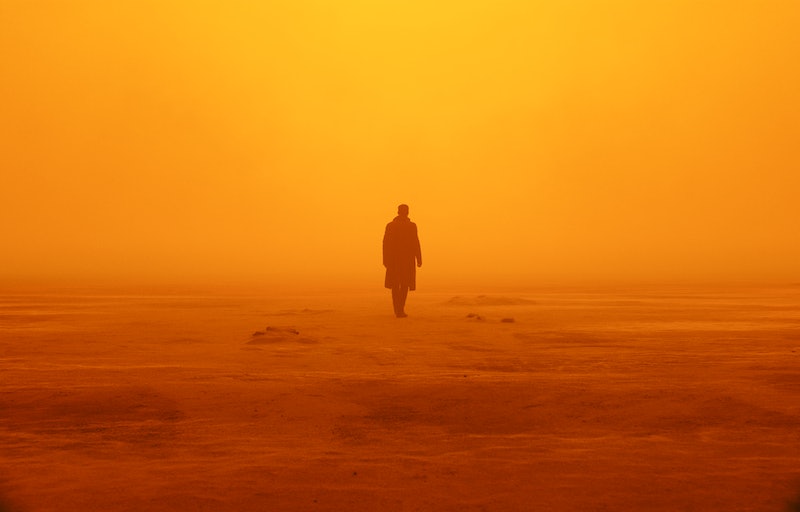 Snips and snails and mechanical tails, that's what replicants in the Blade Runner movies are made of. Well, not quite, but those who've seen Ridley Scott's iconic 1982 science fiction film Blade Runner and its new sequel, Blade Runner 2049, are still at a bit of a loss as to just how replicants are created, exactly, in this on-screen sci-fi universe.

Spoilers ahead! 2049, directed by Denis Villeneuve, features Ryan Gosling as LAPD Blade Runner KD6.3-7, "K" for short. There's no doubt about his nature; shown obediently answering to his superior, Lieutenant Joshi (Robin Wright), he is a replicant, a highly realistic bioengineered android programmed to track down earlier replicant models. The more archaic replicants were created with "indeterminate" lifespans, a dangerous open end in a tightly controlled world, and it's K's job to "retire" them, permanently. Yet returning from missions, K receives “Post-Trauma Baseline Tests.” Why would a machine need to test another machine for trauma?

In Ridley Scott's original film, we watch earlier Blade Runner Rick Deckard (Harrison Ford) administer a Voight-Kampff test to Rachael, a young woman working at the company creating replicants, the Tyrell Corporation. The Voight-Kampff uses emotional responses to determine if the inquiree is human, or android. Implanted with a past from the niece of corporate emperor Tyrell, Rachael does well on the test, and remained unaware of her own replicant nature until Deckard told her. When Decker asked Tyrell why he would do that, Tyrell told him the replicants “developed strange obsessions” and exhibited psychosis because of their lack of ability to cope with emotions. So Tyrell devised an experiment to see what would happen if a replicant were given an "emotional cushion". A stunned Deckard says, “Memories… you’re talking about memories!”

The irony of the original film — at least, the director's cut which kept the infamous unicorn dream in full — was that Deckard himself was POSSIBLY also a replicant, unaware of his status. Some even go so far as to say Deckard was specifically implanted with the memories of Gaff, the disabled former Blade Runner who oversaw Deckard's actions. This is still up for some debate (Ridley Scott says yes, Harrison Ford says no), though the new film promises more definitive answers.

But the ongoing debate points to the danger at the heart of both films — A.I. with emotions. The newer breed of replicants in 2049, created by the Wallace Corporation, rely on programmed loyalty. But in earlier replicants, implanting emotions was intended to make them easier to control by making them feel less "other," be more emotionally manipulatable, their superior bioengineering undermined by human frailty.

Now, exactly how those memories are implanted.... we have some tantalizing clues. Wired's feature on the upcoming film details all sorts of props, including "memory spheres," clear orbs said to contain massive amounts of data. A teaser clip that premiered at Comic-Con earlier in 2017 shows Wallace's replicant assistant Luv dropping one of these memory spheres into a machine, playing back Rachael's Voight-Kampff test from the first film. It's implied this is Rachael's data.

Three short films supplementing 2049 fill in gaps between the first and upcoming film — the memory spheres were all damaged in a major electromagnetic explosion, a calculated attack by a replicant underground fighting back a world of humans bent on destroying them. Following this incident, replicants were banned.... except, it seems, in the case of Blade Runners. Years later, the Wallace Corporation got the ban reversed, and in a clip from the trailer, we see a replicant body spill from a plastic bag onto the floor. Production's begun anew.

Which brings us back to K's “Post-Trauma Baseline Test." Even if tweaked for superior performance, he's still a model of emotion-based replicant. Aware of his status as non-human, but still fallible to human weakness, his efficiency is determined by his lack of humanity. K takes the test twice in 2049 — when he passes and when he fails will tell us more about Villeneuve's vision of what makes a replicant than anything else.