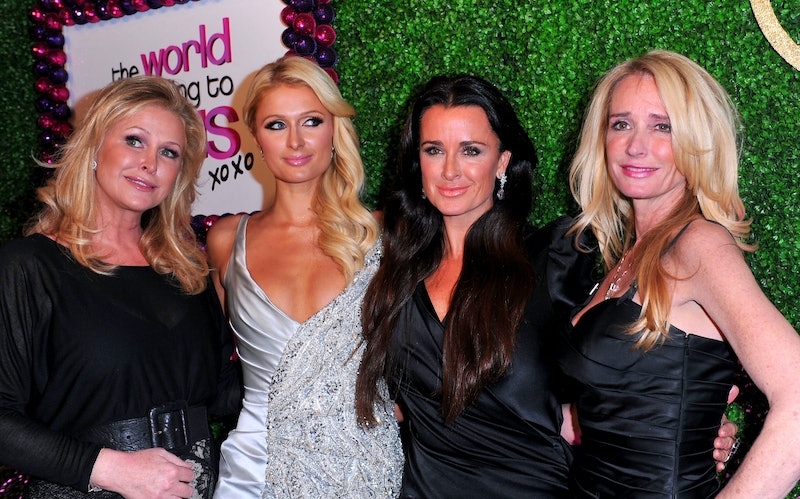 Kyle Richards has been a fixture on Real Housewives Of Beverly Hills since Day One, and her sister, Kim Richards, has made appearances on and off throughout the tenure of the show, ranging from friend to cast member to "that person at a party." It hasn't been easy, but it has been real. And both women have spoken at length about their relationship with the Hilton family — yes, those Hiltons. For RHOBH newcomers, it can be a shock to learn the Richards and Hilton families are related. Here's how the two families came together.

Kim, Kyle, and Kathy are all sisters, born to their mother, "Big Kathy," a woman who was married many, many times. Kim and Kyle have talked about their early lives as child stars, but not much is known about Kathy Hilton. As her last name demonstrates, Kathy married Rick Hilton of the Hilton hotel family Hiltons, and, according to Lifetime, she has four children. Maybe you know their names? Paris, Nicky, Barron, and Conrad.

Given her family's notoriety, Kathy is no stranger to the spotlight, but she had absolutely no inkling to join her sisters on Real Housewives Of Beverly Hills when it came out. She was kind of disgusted by it, actually. “In the beginning I thought this could be a great opportunity. This could be a platform to do a lot of nice things, to have a voice, to give back, and also for business," Hilton told PR.com.

She added, “When I watched the first season and then when I saw what happened on the first season’s finale... It was just heartbreaking that my family could fall apart like that, so I didn’t watch the second season at all."

While watching the dissolution of your family on a show like Real Housewives Of Beverly Hills must be hard, but it was another television show that really started the feud between the sisters. Kyle produced American Woman, a fictionalized program about the trio's mother, Big Kathy, and how she handled the dissolution of her marriage to their father. Kathy was very unhappy that Kyle chose to use their family story, and they stopped speaking.

In an interview with People, Kyle said she hoped that once Kathy saw the show, she would understand. “I would never tell anyone else’s stories. And I felt bad because she thought it was something that it wasn’t," Kyle said. “I love my sisters and I would never do anything to disrespect or embarrass them. I’m looking forward to the show coming out so Kathy can see it and realize. That’s my hope.” American Woman was cancelled in 2018 after its first season, and thankfully, the sisters have reconciled — here's the trio at Kim's recent birthday party.

The drama isn't over, yet, though — and it's not even between the sisters! According to E! News, Kathy's husband, Rick, and Kyle's husband, Mauricio, have beef because Mauricio left Rick's real estate firm to start his own business. This was back in 2015, so let's hope that Mauricio and Rick have kissed and made up by now — it's so much easier to get the families together without all the incessant bickering.

As you can see, all families have issues, it seems — even the ones on reality television.