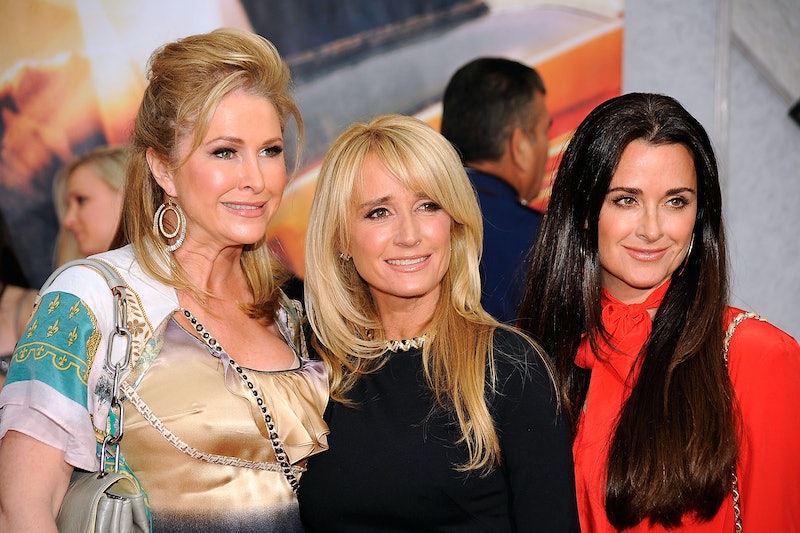 It would be remiss to deny the fact that one of the main reasons the Real Housewives franchise has consistently been so successful is thanks to the drama between the ladies. And when it comes to The Real Housewives of Beverly Hills , sisters Kim and Kyle Richards play a major role in the drama. It's OK to admit that it's one of the biggest reasons you tune in week after week, season after season. The cities may change, and the outfits may get crazier, but the core of why Bravo's reality juggernaut is so successful has to do with the deep-seated tension that always bubbles to the surface when a camera crew follows these wealthy women around.

Since the premiere of The Real Housewives of Beverly Hills back in 2010, fans of the franchise have been glued to the ongoing tension between the sisters Richards and their only sometimes on-camera half-sister Kathy Hilton, Paris and Nicky's mom. It seems like the famous duo were made for TV drama — after all, they were both child actors, so they're no stranger to theatrics. But it's especially hard not to feel for them as they face their issues on camera. Think about it: When you fight with your siblings, would you want the whole world to see it? To comment on it? To have to relive it on reruns? No matter how much wealth or fame you have, it's a tough pill to swallow.

The Richards sisters have faced a lot of serious issues — from Kim's struggles with alcoholism, to the unfortunate incident when Kim's dog bit Kyle's daughter on the hand — and we're learning this season (despite Kim's absence) that the drama is far from over. So let's break down the always complicated, ever-evolving relationship between these Beverly Hills Housewives.

Season 1: We're Introduced To The Drama

As soon as we were introduced to Kim and Kyle, we learned that though they're incredibly close, there were plenty of problems already brewing. A 2006 book about the famous family, called House of Hilton, claimed that as children, Kim and Kyle were pitted against each other by their mom, who died in 2002. The book also claims that the three daughters were encouraged to marry into wealth to further the family name and reputation. By the time Bravo viewers met the sisters, their mom had died, leaving old wounds still open. Their fighting during Season 1 was mostly trivial bickering, but ended up culminating in a tense showdown in a limo (hey, these are Housewives after all), which marked the first time Kim's struggles with alcohol were mentioned on the show.

Season 2: A Little Bit Of Brandi

This season found the sisters struggling to repair their relationship, and things were rocky when we learned that Kim was still working on her sobriety. Things weren't made much better by the introduction of the resident Housewives firecracker Brandi Glanville, who made clear from the get-go that she was there to light some fires. There was also tension because Kyle made it kind of clear that she didn't like Kim's new boyfriend, Ken. Kyle was shown to be extremely protective over her big sister, and it's easy to understand why: With Kim in an environment where luxe parties and copious amounts of alcohol are an everyday occurrence, it would be hard for anyone to not succumb to temptation, especially a struggling alcoholic.

The third season of the show focused much less on Kim and Kyle's issues and much more on other Housewives' issues (ahem, Adrienne Maloof...) but we still had our glimpses of the family dynamic. Kim, fresh from rehab and seemingly on the up and up, was often questioned by the other Housewives for her loopy and often bizarre behavior, but Kyle showed that she was always there for her sister. A highlight was the "nose reveal" party for Kim after her long-desired nose job surgery (hey, this is Beverly Hills, guys) and it showed that Kim is so great because she doesn't take life as seriously as some of the other ladies.

Season 4: The Calm Before The Storm

This season showed Kim at her strongest — sure, she was still Kim (stopping to pray wherever she felt like it, even kneeling in front of a garbage can... Oh, Kim!) but she appeared to be a much more zen-like Housewife. Of course, though, this is a Housewives season, so the drama was still there in spades (like the teaming up of the sisters Richards in the fight against Ken Todd and Lisa Vanderpump in Puerto Rico), but things overall were pretty smooth sailing. At least until...

Kim and Kyle endure an incredibly tumultuous season this time around, with the tension from relations with Brandi at an all-time high. It appeared even clearer that Kim was off the wagon, and Brandi didn't make for a great influence, since she was frequently around alcohol. Kim entered the hospital for several days and Kyle was increasingly worried about her sister, because she had taken pain medication that the doctor gave her, and Kyle worried this might lead her to relapse. Brandi tried to get between the two sisters and it seemed to work — Kyle and Kim spent much of the season fighting. The drama culminated on the group trip to Amsterdam when Kim fought with both new Housewives Eileen Davidson and Lisa Rinna, and it was clear that Kim needed some real-life help, away from the glare of the cameras and the glitz of Beverly Hills. Adding fuel to the fire, Kyle's daughter spent some time in the hospital when Kim's dog Kingsley bit her on the hand in late 2014, and Kim was upset that Kyle took to social media to make light of the incident.

Due to Kim's behavior in Season 5, she was reportedly not asked to return for Season 6, though she's been rumored to have a few upcoming appearances. Kim's struggles were at an all-time high in the spring, when she was arrested in April at the Beverly Hills Hotel. She entered rehab shortly thereafter, and appeared on Dr. Phil , admitting that she was not sober during the RHOBH reunion, though she said otherwise on the show. Her interview was a dramatic one (she eventually walked out) and showed that she's still so fragile. The sisters hadn't spoken in months at that point, but Kyle did reach out to Kim. According to People, Kim left rehab to attend her daughter's wedding in Mexico, and did not return immediately after the wedding, worrying those around her. In early summer, Kyle announced plans to produce a TV Land comedy "inspired by her upbringing," and admitted on Season 6 of RHOBH that Kim and Kathy are not pleased about it.

Things managed to get worse for Kim when she was arrested for shoplifting at a local Target in August, and was sentenced to 36 months of probation. But Kyle proved that she's loyal to her sister when the two spent Kim's birthday together in September. At this point, it appears Kim is on the right track, following a very bumpy year. In late November, Kyle confirmed Kim's sobriety and told Andy Cohen, "We have a very difficult relationship and we will probably always be a work in progress."

It seems that things between Kathy and Kyle are also rough, which Kyle addressed on Season 6 of RHOBH. Kyle had originally been invited to niece Nicky Hilton's extravagant London wedding in the summer, but things abruptly changed and she was suddenly uninvited. Ultimately, Kyle and two of her daughters did end up attending, but there's still no shortage of drama in this family.

Here's hoping that the family can set their tensions aside and enjoy some healthy, drama-free times in their lives!