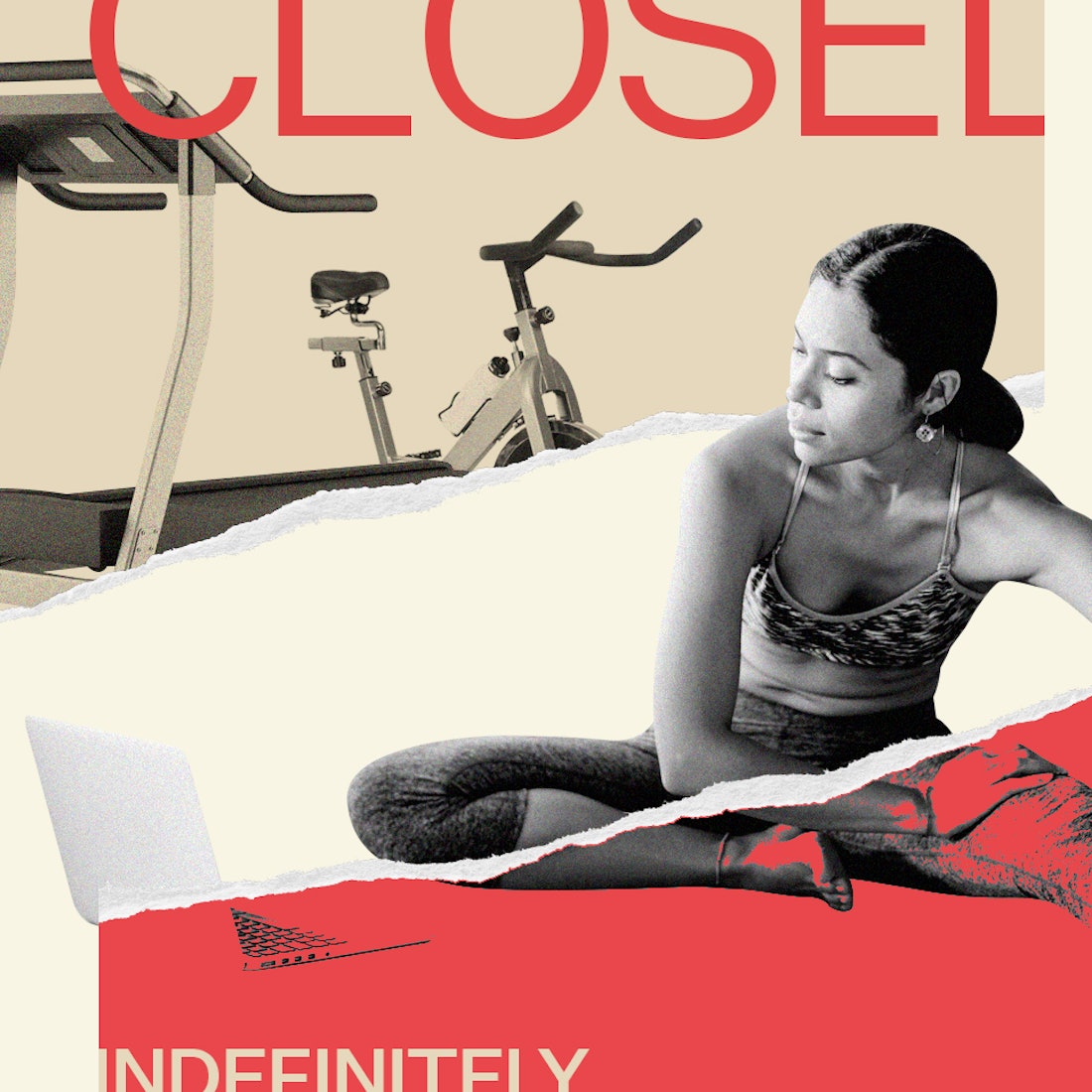 I’m sitting in a cross-legged position on my yoga mat, my spine tucked into neutral. But instead of directing my gaze to the mat in front of mine, I’m looking at two Goya black bean cans — my weights — and my laptop, live-streaming a workout class from my closed neighborhood pilates studio.

The scene is a newly familiar one. After 10 weeks in quarantine, you’d be hard pressed to find someone who hasn’t done dance cardio over Instagram Live. YouTube data shows that average daily views for videos with “home workout” in the title increased over 340% since March 13, and Google searches for at-home exercise spiked around the beginning of quarantine.

Digital classes can make exercising easier — according to a survey conducted by Pollfish on behalf of the Bustle Trends Group, 33% of Gen Z and millennials are working out more since they’ve been stuck at home.

But just as demand for virtual fitness has never been higher, instructors and experts say the coronavirus is accelerating changes in workout culture — an increase in cheap, virtual options and a desire for convenience — that were set in motion way before the pandemic.

Short Term, You Can Count On Instability

“A lot of smaller studios are entirely dependent on foot traffic in order to pay the rent,” Natalia Petrzela, Ph.D., a professor of history at The New School and author of the forthcoming Fit Nation: How Americans Embraced Exercise as the Government Abandoned It, tells Bustle. After a few months of zero income from in-person classes, she says, smaller, independent studios just can’t make it. As Sadie Kurzban, founder of 305 Fitness, which has been offering free dance cardio classes on YouTube, previously told Bustle, her business is 2% of what it had been pre-pandemic.

“The studios that can are pivoting to digital in a way that will cushion the blow for some of them,” Petrzela says. “But it's hard because there's so much free digital content right now.”

Even if boutique workouts reopened tomorrow, people might not immediately feel safe returning to their favorite circuit training class. (Though in some states businesses like gyms are starting to reopen to jump-start the economy, public health experts warn they're not exactly safe yet.) While 65% of 24- to 39-year-olds said workout classes are the activity they’re most excited to return to once social distancing restrictions are lifted, according to a survey of 2,000 people conducted by OnePoll on behalf of Bustle, they’re also what 49% of respondents are most hesitant about.

Kirsten, 22, was grateful that her gym paused membership fees, after she felt like the chain wasn't taking proper precautions when the outbreak hit. “I’m going to be very concerned about what I’m touching,” says Steph, 33, of going back to her workout routine.

Long Term, Working Out Will Be More Accessible And Inclusive

While closures and enhanced hygiene precautions will impact the physical ways people exercise, the way we think about fitness will change, too. For some, it'll be all about convenience.

Anna, 26, wants to return to in-person 305 classes after keeping up with instructors digitally, but if the streamed workouts continue, that might change things. “It might be harder to motivate myself to go out when I'm feeling lazy and know I can get 60% of the full experience from my home,” she tells Bustle.

Mady, 32, was never really a “home workout person,” but now sees it becoming part of her schedule after quarantine. “It’s easy and quick, if you don’t have a lot of time,” she tells Bustle.

A digital experience is also a welcoming one. “Online fitness is a great way to be more inclusive and reach people across the board, as opposed to just the people in these big cities,” Bethany C. Meyers, founder of the be.come project, a digital, membership-based workout community, tells Bustle. For people who are new to working out, or wouldn’t otherwise feel comfortable going to a gym, getting into exercise at home during the pandemic can help determine what makes them feel best, they add.

We'll Be Spending Less On Fitness

No one I spoke to cited price as a huge concern, but there’s no question that digital options are cheap. Just 9% of respondents to a March survey of 500 BDG Hive members said they’re paying for streaming workouts.

Anna discontinued her $219/month 305 membership and instead does the free classes, while tipping instructors. Mady doesn’t mind spending money on working out, but she’s getting used to paying less. With nearly 15% of Americans unemployed, and many more taking pay reductions or furloughs, it might be hard to justify buying the 10-pack of Pilates reformer classes for $350 when you can do a YouTube video.

“When we make [workouts] available for free, people don’t see it as valuable,” Helen Phelan, a freelance fitness instructor, tells Bustle. “You could argue that these instructors who are going live for free every day are getting the feeling of giving to their community, but at what cost?”

The industry-wide pivot to digital has been coming for a while, Petrzela and Phelan note, and current conditions will only exacerbate that trend. Peloton offered new users a 90-day free trial on its app in March; now, a surge in bike sales has driven up its stock prices, Marketwatch reported. Brynn Jinnett Putnam, CEO of Mirror, told CNN Business that sales of the company’s $1,495 device have more than doubled since March.

High-end products like these necessarily have a limited consumer base. “People are going to have very real financial constraints,” Petrzela says. But she adds that “spending on fitness has evolved in our collective minds from a luxury [to] an expense.” Basically, people will justify spending what they can, whether that’s paying for Peloton’s app instead of buying a bike outright ($12.99/month); signing up for another platform like Aaptiv ($14.99/month); or doing donation-based or sliding scale classes with indie instructors.

The Core Of Why People Work Out Will Stay The Same

We won’t know what the full effects of COVID-19 on the workout economy will be for years. But more than getting your heart rate up, more than the mental health benefits, many people work out to be part of a community. And that’s not always possible when you’re doing bicep curls with a can of beans.

“I miss the true aura of 305,” Anna says. “I think if there was one day when all of a sudden we knew everything was safe and the world returned to normal, many people would rush back out. That first in-person class would be an incredible release of pent-up energy. But I don't know if that is realistic.”

Kristen misses having an instructor adjust her posture, as well as the accountability that a group fitness setting provides. “I miss being able to feed off other people's energy, too,” she says.

“You can Google how to do a squat,” Phelan says. “People go to classes or instructors repeatedly because they identify with them. And it is an experience.”