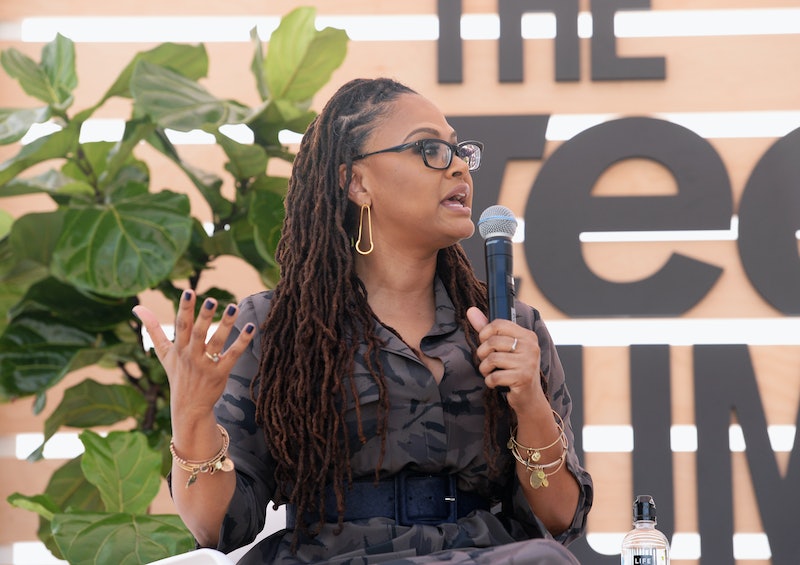 The film hasn't even come out yet, but Ava DuVernay's made history with A Wrinkle in Time already. At the helm of the upcoming and highly anticipated Disney adaptation, DuVernay became the first black female director of a $100 million film. The history-making director is taking this monumental moment to create a piece with purpose. At Teen Vogue's LA summit, DuVernay explains her intentions from the beginning of the project, saying, "Making sure everyone belongs in the picture was a goal." Here's how DuVernay models representation with her A-list cast, creating something that's not "just a Disney movie."

DuVery's said she envisioned a "brown girl" playing the lead role of Meg (who's a white girl in the book) from the start. Hence, her lead actor, 14-year-old Storm Reid, who has said, "It means everything to be a girl of color and play Meg." DuVernay's lead star is just the tip of the iceberg in the whimsical story's multidimensional cast.

"I think on the surface, A Wrinkle in Time is a fun Disney movie," DuVernay explains at the summit. "But for me, coming off of Selma, 13th, my series Queen Sugar... It was the possibility of taking a classic movie with classic tropes, with the biggest studio in the universe, and saying, 'What if we take these roles that are usually seen one way and just subvert that, deconstruct it and make sure we represent all kinds of people?'"

This notion is beautifully exhibited through the Misses. In the film, the guardian angels who help Meg, AKA the Misses, are played by vets Reese Witherspoon, Mindy Kaling, and Oprah Winfrey. But this choice meant much more to DuVerney than just picking three women with star power. She explains why she was so cognizant about the decision and the logic behind putting these three together.

"In the book, they look like three kind of, you know, old, white ladies with grey hair. Little grey, white aunties," she days. "We wanted to show a variant of age, a variant of body size, a variant of ethnicities and backgrounds — just with those three women." First, DuVernay explains the reasoning behind choosing Witherspoon as the first Misses, Mrs. Whatsit.

"So we have Reese Witherspoon, she kind of represents 40-year-olds and a certain body size. She's great because she went with us on this ride to flip the all-American girl persona and she does some really interesting things."

Then there's Kaling, who plays Mrs. Who.

"We have Mindy Kaling, a southeast Asian woman who is out there, her role is really magical in what she does. And that's a representation in terms of the lead in a fantasy film you never see."

And lastly, is DuVernay's real-life mentor, Oprah Winfrey, who plays Mrs. Which.

"And then there's Oprah Winfrey, a 60-year-old black woman, who's a part of this crew. There's something about age and body size and race that was interesting to unpack."

While DuVernay and her team were able to explore such a range of diversity through the female Misses alone, the rest of cast bursts with a glorious mix of faces. "Meg's little brother is a little Filipino boy [Deric McCabe], Michael Peña is in this film, a Latino man, André Holland from Moonlight, a black man, Chris Pine, a white man," DuVernay continues. "All of us came together to make a film that is about representation and seeing yourself when you look in the mirror and the world like it really is," she says.

DuVery's mission for A Wrinkle in Time is clear, as she ends by saying, "Kind of sick of going to films and seeing it only one way."

And just like that, she's shaping the world of fairy tales as we know it.

More like this
Daryl McCormack On His Unusual First Audition With Emma Thompson
By Olivia-Anne Cleary
Everything To Know About 'My Big Fat Greek Wedding 3'
By Grace Wehniainen
Alicia Silverstone Has Recreated An Iconic 'Clueless' Scene
By Frances Stewart
Emma Thompson, Lashana Lynch, & Stephen Graham Lead Netflix’s 'Matilda'
By Sophie McEvoy
Get Even More From Bustle — Sign Up For The Newsletter