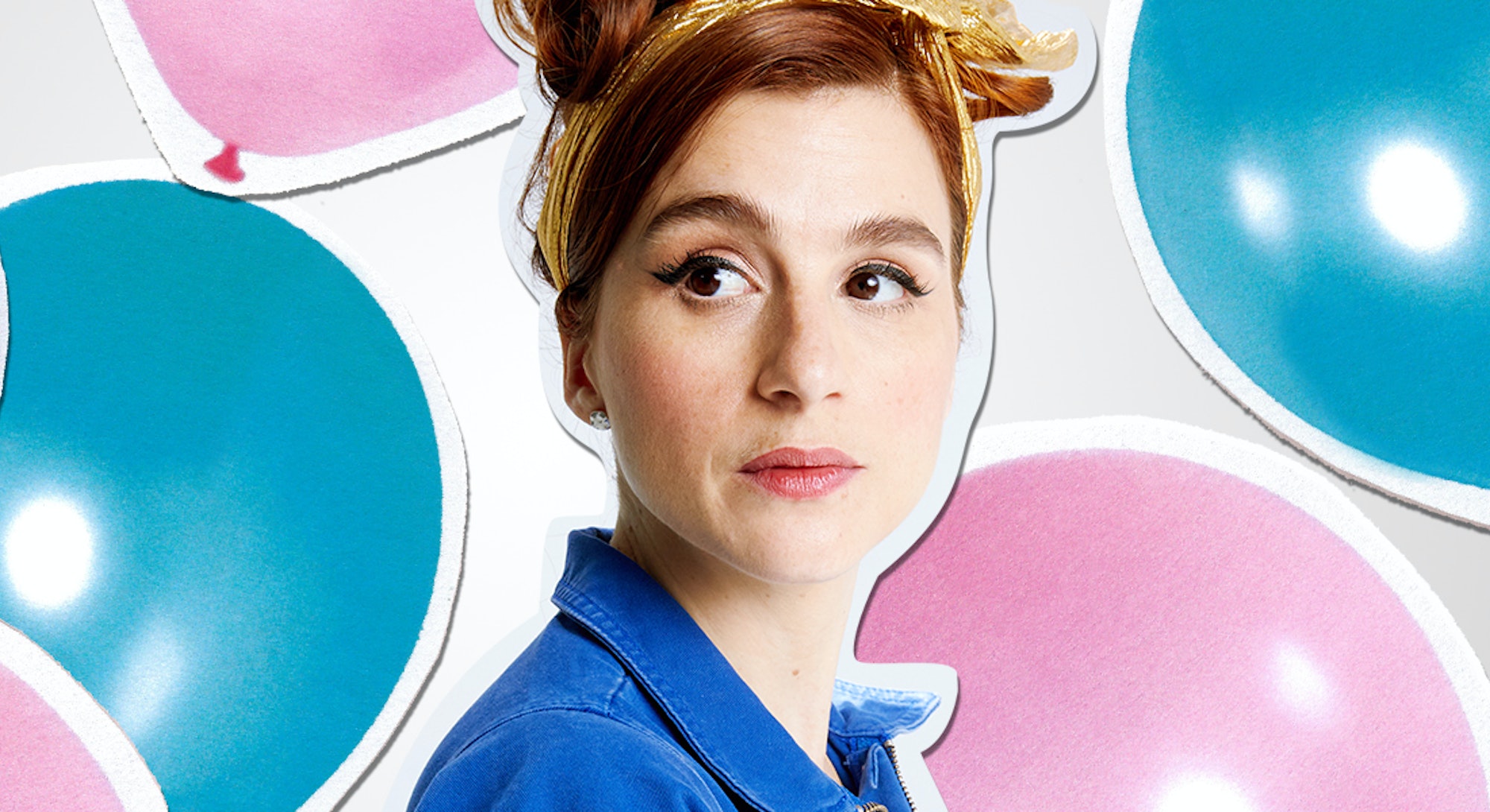 I can't tell if I'm talking to Aya Cash or Gretchen Cutler. The redhead sitting next to me on the couch in a bohemian chic studio in East L.A. is practically indistinguishable from her You're the Worst character on this hot, sunny day. She arrived to the photoshoot wearing sweats and hasn't taken off her sunglasses, even during our interview. But as I soon learn, it's not because she's hungover after a night of raucous Hollywood parties or because she is too cool to take them off indoors. She's actually getting over being sick, and apologizes over and over for being "so snotty" and coughing. Gretchen would be appalled: she never says sorry to anyone.

As the female romantic lead of Stephen Falk's anti-rom-com rom-com, You're the Worst, Cash's Gretchen chooses to break out her vibrator in a public place instead of finishing a simple mindful meditation exercise, uses her therapy sessions to try out new insults on her therapist, and tackles the tough subject of depression, all while making audiences laugh at and even identify with her character. If she's a rom-com heroine, she's unlike any other that came before her. Although You're the Worst is a romantic comedy — Falk always describes it as such, as do Cash and fellow cast members Chris Geere, Kether Donohue and Desmin Borges — Cash isn't here to be your stereotypical rom-com heroine. She's not some adorable caricature of a woman unlucky in love until her prince charming waltzes into her life to save her. She's foul-mouthed, messy, selfish, rude, and not obsessed with finding her own happy ending. She's also clinically depressed.

...you start to almost become desensitized, and comedy is a way to talk about those issues without taking a sledgehammer to your head

While Cash finds it laughable to think that she's anything like her brazen, unapologetic You're the Worst alter ego in real life ("She's 'butterfly effect' me," she jokes), the actor does relate to Gretchen on a deeper level.

"I was less of a participant in society when I was younger. I was much more interested in drinking and drugs, not giving a sh*t about anything even though I actually cared too much about everything," she says. "So I identify with a lot of aspects of Gretchen and her need to self-medicate because of her feelings of alienation and loneliness."

And Cash knows how rare it is to get to play such a nuanced and unique character — "someone who is complicated and fun and real." She even says that using a character to connect and communicate with audiences and help others accept their flaws is "the goal of art."

"Playing prostitute No. 2 is not necessarily the way I feel most connected to people," Cash adds with a laugh. "To have people come up to me and say they struggle with clinical depression and it was so helpful to see that struggle on television, or even how cavalier we treat sex in that women can have sex without shame around it, that's empowering."

While Gretchen has pushed the envelope from the very first episode of the series, it was the groundbreaking and authentic arc in Season 2 revealing her struggle with depression that clinched her spot as one of the most progressive rom-com heroines ever. Her so-messy-it's-deadly apartment (it literally burned down because of her negligence, y'all) and no-f*cks-given lifestyle suddenly had a source and wasn't just played for laughs. Gretchen stayed in bed for days that turned into weeks. She self-medicated with drugs and booze until finally giving in to the idea that, oh, maybe she should go see a therapist. And all the while, she knew that she couldn't be "fixed" despite her boyfriend, Jimmy (Geere), trying his hardest to do just that. And because she gets so dark, Gretchen is a character lots of women can actually relate to, unlike most rom-com BS tropes we've been spoon-fed over the years.

"Things come in waves. There are times where we're really up for escapism and times when we're not," Cash says referring to the industry's recent shift towards characters more like Gretchen. "In times of war and things like that, people tend to want escapist reality stuff. We've been in a time where we have been looking for a little more reality."

And we've been through periods like this before — "Weeds is a perfect example" of the antiheroine that comes about when reality gets stranger than fiction, Cash says. "We've been in a long swing of the other [side], wanting things to look perfect," Cash says. "Now we live in a world of Instagram and perfectly framed lives, so we're in a backlash to that."

Even though we're in the swing of that "backlash," many You're the Worst viewers were shocked by the comedy's darker second season turn. Even Cash calls that twist a "bait-and-switch," but she was never worried about losing viewers because of her clinical depression storyline. "Nothing is ever really done for shock value — except for maybe Lindsey inseminating herself with a turkey baster," she says. "But that was funny."

She pauses for a moment to think. "I was worried about how the audience would feel about [the depression arc] ... And some people didn't love it, they didn’t want their comedy to take them in that direction, and that's fine." Cash says she's excited to be a part of something that "keeps experimenting," adding with a smile, "We haven't failed yet."

However nervous she may have been when she first learned her rom-com heroine would wrestle with something so serious as clinical depression, Cash is confident now that You're the Worst was the best way to serve up a story about such a real and pervasive issue like mental health. There is still such a stigma attached to depression, so exploring something like that through a lens of comedy makes it more palatable for viewers, whether or not they realize it.

"Given the world we're living in, it's one of the only ways to explore dark issues at this moment," she says. "I'm so overwhelmed by how horrible things are in the world, so you start to almost become desensitized, and comedy is a way to talk about those issues without taking a sledgehammer to your head. It takes you out of it, so you can feel removed from it in order to accept the information because it's coming through a different channel." She adds that comedy is "the only way people will listen."

As much as Cash loves doing the lighter, more ridiculous scenes with Gretchen, she's much more a fan of getting to sink her teeth into a serious arc so she can connect with more people through dark comedy.

"I'm up for the darker stuff because that feels like my world," she says. "My wheelhouse is not broad comedy. I'm not a standup. I didn't come out of UCB. My path was totally different from a lot of people in the comedy world. I do a lot of comedy stuff now and I'm always incredibly intimidated because people are so insanely funny, and I can be funny if someone else writes the words."

Again, she pauses and laughs. "Oh god, I just admitted I'm not a comedian," she says, realizing that she's being interviewed for a comedy package.

Seeing as how Cash can get all of us to laugh about life's darkest moments like losing a parent, dealing with severe mental health issues or PTSD, we can forgive her for not considering herself a comedian. She's so much more.