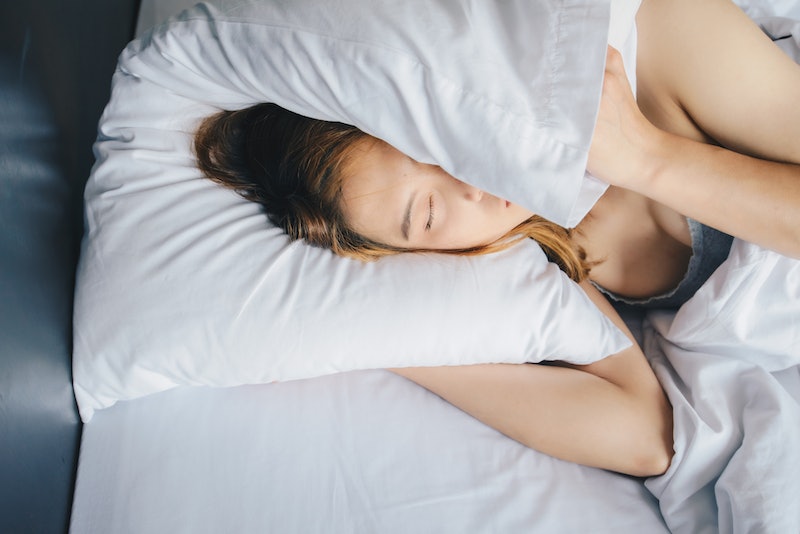 You're running down a dark hallway being chased by a mysterious being who is also your high school bully — and then you wake up in your own bed, and realize it was just a nightmare. For many of us, nightmares have very real effects on the body; I wake up from my own (usually about missing flights and getting hopelessly lost in airports) drenched in sweat, with a racing heart. Experts tell Bustle that the physiological aspects of nightmares aren't just found in the brain, and that these terrifying nocturnal experiences can impact many parts of the body.

One of the most noticeable ways in which nightmares can affect your body is via your heart rate. Dr. Michael Breus Ph.D., a sleep expert, tells Bustle that nightmares can often result in higher heart rates and increased blood pressure. REM sleep, or rapid eye movement sleep, is the period of sleep two or three hours after slumber begins in which we experience nightmares and all other dreams, and during REM sleep our heartbeats tend to become slightly irregular. It's common for people experiencing nightmares to show bodily symptoms of panic, including higher perspiration and a racing heart.

The area of the brain responsible for these symptoms is the amygdala, the brain's "fear center," which shows a lot of activity during nightmares. Dr. Breus tells Bustle that the more intensely emotional a dream is, the more activity the amygdala might show. This activation means that the body reacts to the threat in the dream as it would in waking life. There's actually a theory that nightmares evolved as rehearsals for real-life threats, to help humans rehearse their responses to, say, being chased by saber-toothed tigers.

Interestingly, the brain's awareness of your heartbeat may be a key part of nightmares for some people. A study published in NeuroImage: Clinical in 2019 found that people with nightmare disorder — who experience frequent nightmares, often multiple times a week — react to their heartbeats in a different way during REM sleep. "Patients with nightmare disorder had increased amplitude of the heartbeat-evoked potential, which represents the response of the brain to our heartbeat. This difference was found only in REM sleep," lead study author Lampros Perogamvros of the University Hospitals of Geneva told PsyPost. Heartbeat-evoked potential tends to be highest when we're extremely emotional, as our brains register our higher heartbeats and how they're affecting our bodies. We don't understand quite how this awareness of heartbeat might feed nightmares, but there definitely seems to be a link.

The rest of the body is affected by nightmares, too. During REM sleep, Dr. Breus tells Bustle, we experience something called REM atonia, where most of our muscles and reflexes are immobilized. It's why you don't fall out of bed all the time while you're dreaming. However, there's evidence from some studies that dream-enacting behaviors, where we act out the emotional, active or verbal components of dreams, are a lot more common when we have nightmares. You'll be more likely to thrash about, make faces, or speak aloud when you're having a bad dream versus a dream where you marry Harry Styles.

The rest of the body feels nightmares, too. A study published in Psychophysiology in 2019 found that when people were having nightmares, the activity in their autonomic nervous system was far higher than when they were having perfectly harmless dreams. The autonomic nervous system is responsible for a lot of the body's internal processes, including temperature, blood pressure, metabolism, bodily fluid production and digestion, and controls a lot of our internal organs. The researchers behind the study think this high level of autonomic activity could help to explain why nightmares cause poor sleep — not just by waking us up through fear, but by putting many aspects of our body on alert.

Next time you wake up from a horrendous nightmare and feel your shaky palms and double-time pulse, be comforted that you're not alone. Your body may take a while to calm down from its state of high tension and arousal, though, which is why dropping off again after a terrifying dream about clowns is so difficult. But all of these changes in your body happen for a reason, and you will get back to sleep eventually.