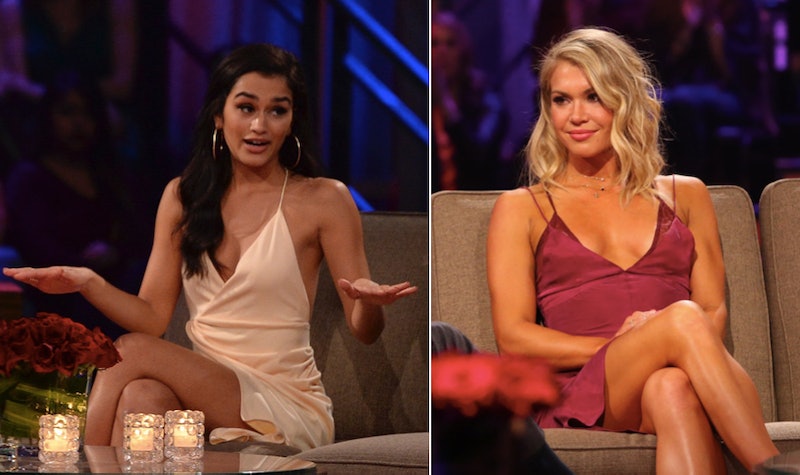 It's been a year since Taylor Nolan sat in the hot seat at the Women Tell All and tearfully revealed that all the Bachelor drama between her and Corinne Olympios had forced her to walk away from her career in mental health counseling. Today, things are on the upswing for the reality star, who found love and redemption on Bachelor in Paradise, but she's still dealing with the fallout of intense hate from Bachelor Nation. She tells Bustle in a phone interview that the experience went so much deeper than internet comments, and she knows that some of Arie's contestants are facing the same thing. Fans don't fully understand what it's like for a Bachelor contestant to endure harassment from viewers, and Taylor's opening up about her own horrific experience to show how real this can be for people.

When Taylor signed up for the show, she was just looking for a new life experience. "What better way to explore and challenge myself ... than to go date a total stranger on national TV?" she says. Little did she know she'd be entering into one of the biggest challenges of her life. See, Taylor (along with Corinne), got the "villain" edit on Nick Viall's season of The Bachelor. But unlike Corinne, who arguably leaned into her villainy in a way that led some fans to support her, Taylor was the villain fans did not like — and that was the problem.

"I definitely did not think I was going to have the experience that I had," Taylor says of her time on the show. "I think almost every girl goes in thinking she at least is gonna have a decent time. I don't think anyone expects that they're gonna be a villain or that they're gonna get wrapped up in any drama. I thought things were gonna go well."

"The comments I got about me being a therapist were so negative that it did scare me. I was scared to accept a new client and not know what their motive was."

Taylor says she mostly got along with everyone in the house and never expected her relationship with Corinne to take center stage. "It was very surprising to watch back," she says. "Aside from the drama I had from the two-on-one, my relationships were pretty good. You don't connect with everyone and not every girl in the house is going to be your BFF. But for the most part, I felt like people understood where I was coming from."

Taylor's most dramatic moment was her struggle with Corinne's "emotional intelligence." As a mental health counselor, she disagreed with how Corinne was attempting to win Nick's affections, and she talked to her about it. Corinne didn't take it well, which led to an explosive confrontation. That fight all but guaranteed they would later be paired and pitted against each other on the two-on-one date, on which Taylor was ultimately sent home. When the show started airing, this drama with Corinne was focus of her edit — and fans at home were quick to take sides. Practically no one sided with Taylor.

"It was very rough," Taylor says of how fans took to social media to attack her once the show started airing. "People are very willing to spread their hate, and spread their negativity — much more than they are to spread their positivity."

For example, Taylor says she was often pitted against Corinne by fans — long after their fight ended on the show. "This girl who was literally like 12 years old commented on one of my photos from nine weeks ago, and was like, 'I always liked Corinne more than you; I just don't like you at all.'"

Why go negative at all, Taylor wonders. Why not just tell Corinne you like her on her own Instagram page? There's no need to do the opposite. Ultimately, though, Taylor says the online bullying went so much deeper than Twitter or Instagram comments — it threatened her safety and her livelihood.

"I was incredibly resistant to the relationship with [Derek on Bachelor in Paradise] and a large part of it was my fear that ... he would see the hate that I had been getting and that he wouldn't want to be with me any more."

"Someone literally wrote in a complaint to the Department of Health of Washington state to try to report my license for unprofessional behavior ... It kind of makes me cry talking about it now," she says, her voice betraying her emotion. It's clear that though she may have moved on from The Bachelor and the show's fans may like her more now after Bachelor in Paradise, these very real traumas still affect her. Though she notes that no investigation occurred after the complaint and it was dismissed by the Department of Health, this type of harassment forced her to re-evaluate her career.

"I had so much going on with my own mental health that I was not able to barely get out of bed some days let alone ... be a consistent, reliable, mental health counselor for someone who is struggling," Taylor says. "The comments I got about me being a therapist were so negative that it did scare me. I was scared to accept a new client and not know what their motive was."

She made the difficult call to suspend her practice for her own safety. She's come a long way since then, though. These days Taylor is still a staunch mental health advocate. She produces and hosts a podcast called Let's Talk About It focused on mental health, and she is using her platform to speak out about the issues that are important to her. But the audience she has now may not have been there without her solid redemption arc on Bachelor in Paradise, something that Taylor is keenly aware of.

Taylor went from public enemy number one for Bachelor fans to someone to admire in a matter of weeks once BiP started airing. When I ask her why she thinks that happened, she says simply, "Because I found love. People love love. And people would feel very mean about themselves if they were hating on someone who is falling in love, I think."

"At the end of the day, people can say positive things and they can say negative things, but they also still don't also know me ... I'm not going to — anymore — let either one of those things break me down or build me up."

It says a lot about our society that Taylor finding a fiancé in her Bachelor in Paradise co-star Derek Peth is what redeemed her. Rather than people just being decent to her, whatever her faults, because she's a person — they ridiculed her until she had a guy on her arm.

But Taylor says that she was so traumatized by the fan reaction to being on The Bachelor that she was initially wary of dragging Derek into that world. "I was incredibly resistant to the relationship with him and a large part of it was my fear that when we left Paradise and when he saw what my life looked like in terms of my public image, that ... he would see the hate that I had been getting and that he wouldn't want to be with me any more."

Fortunately, Taylor didn't let the trolls control this part of her life. She stuck with Derek, and he stuck with her. "He's very patient with me," she says of her now-fiancée. "He was like, 'If you get hate online, I don't care about that.'"

Once BiP started airing, Taylor was pleasantly surprised to see fans change their tune. But ultimately, she's not forgetting what they put her through. "At the end of the day, people can say positive things and they can say negative things, but they also still don't also know me. They don't know my full experience, so I'm not going to — anymore — let either one of those things break me down or build me up."

Taylor learned an impossible lesson in the harshest way once leaving the show — and seeing it come full circle. It's a great study in how fickle fans can be, and how their opinions change with the wind. But it doesn't make that vitriol any less scarring and traumatic. Taylor understands that people will always watch the show and want to comment on it, but she cautions people to spend their energy building up the contestants they do like, and leaving the rest alone.

"If someone says something silly and you're watching with your friends, make fun of it with your friends ... you don't necessarily need to go tell that person on social media that you don't like them. They don't care. They don't need to know that," Taylor says. "Think about if this were you on the show, and how you would handle reading a comment that you were gonna send to someone."

Taylor also has advice for the so-called "villains" of Arie's season and beyond. "Don't read the comments, no matter how tempted you are." And she thinks everyone, whether they had a good experience or a bad one on the show, should go to therapy. "There's no shame in it, and you just went through something so bizarre. Even if you had a good experience, that's still a really weird, new experience and you're taking on a whole new part of your identity now as being someone who was on TV. That changes your life in ways that you don't even know how."

So, as Arie's Women Tell All rolls around and contestants hit the "hot seat" to "answer for their actions" and are pitted against each other (Chelsea and Marikh, Bekah and Tia, Krystal and everyone), fans and fellow contestants alike would do well to remember that negative comments can have a real and lasting impact on people. After all, nobody needs more hate in their lives. It's time for Bachelor fans to break that cycle.