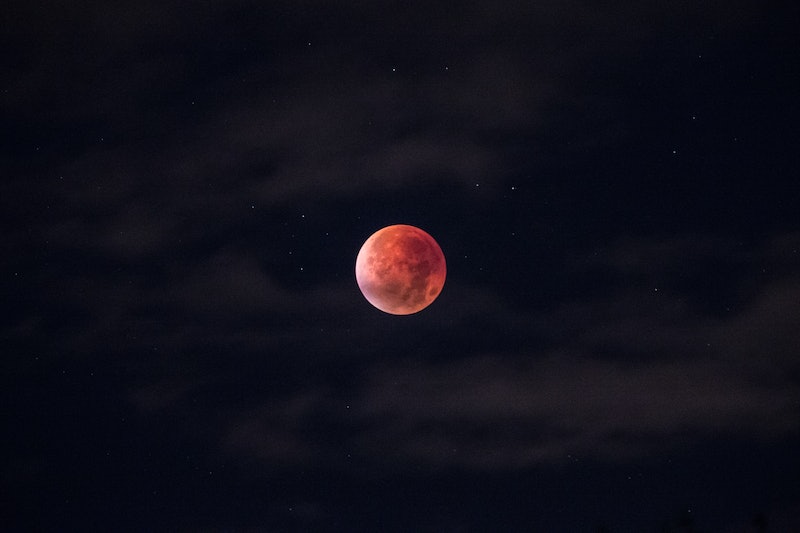 In case you missed it, the Harvest Moon is making a rare October appearance in 2017, lighting up the sky on Oct. 5. Astronomy buffs probably already know that this is a special occasion, considering the fact that the Harvest Moon (aka, the full moon that falls closest to the autumn equinox) typically happens in September. But shouldn't we all have a little more knowledge of this unique lunar event? Why should space lovers have all the Harvest Moon fun? This moon has inspired songs and video games and tons of folklore, so I think we all should know a little bit more about it, starting with how big the Harvest Moon actually is.

Thanks to the Harvest Moon's historical significance — it was named because its light allowed farmers to spend more time working in their fields in the shorter stretches of sunlight that came with the autumn equinox — and the hype it gets from modern space fans, many people assume that this particular full moon should look a lot different than the others that appear throughout the year. As a culture, we've been conditioned to pay more attention to the sky when the Harvest Moon is upon us. With that increased attention comes a lot of unfounded conclusions that it's brighter, more orange, or bigger than it really is.

So, what's the truth? According to EarthSky, the 2017 Harvest Moon doesn't actually qualify as bigger than average. It may appear that way when you're looking at it just after sunset because you're seeing it closer to the horizon, though. During a less storied lunar cycle, you would likely only take notice of a full moon incidentally, and much later in the evening. At that point, the moon would have moved further away from the horizon, and would therefore look smaller than if you'd seen it earlier.

This phenomenon can be explained more easily with an astronomical concept called the Moon Illusion. According to Alamanc.com, "When the moon is high overhead, it is dwarfed by the vast hemisphere of the heavens. By contrast, when the Moon is low, it is viewed in proximity to earthly objects, such as chimneys or trees, whose size and shape provide scale." At the risk of going totally cliché on you, it's all relative! The Moon Illusion helps explain this visual relativity at all times of the year — not just during the Harvest Moon.

As the closest celestial body to the Earth, the moon appears much larger than any of the stars in the sky, but it's actually much smaller than you may think. This is true of the Harvest Moon as well. At just over one-fourth the size of our own planet, the moon has a much smaller ratio to Earth than the moons of other planets do, according to Space.com. The moon's surface area is roughly 14.6 million square miles, which is less than that of Asia. It has a circumference of about 6,784 miles and weighs about 81 times less than Earth.

I won't deny that the Harvest Moon is visually beautiful (though its bright orange appearance is also an illusion), or that its light played a unique role in helping our agricultural forbearers extend the length of their all-too-precious autumn working hours. Still, it's interesting to unpack the ways in which our scientifically flawed understanding of this cosmic phenomenon have been influenced by folklore and good old optical illusions.

And just because the Harvest Moon isn't actually bright orange or larger than your typical full moon doesn't mean that the illusion of it isn't totally breathtaking or worth admiring. It just means that our universe is that much more full of interesting visual tricks and mysterious natural wonders to attempt to understand.