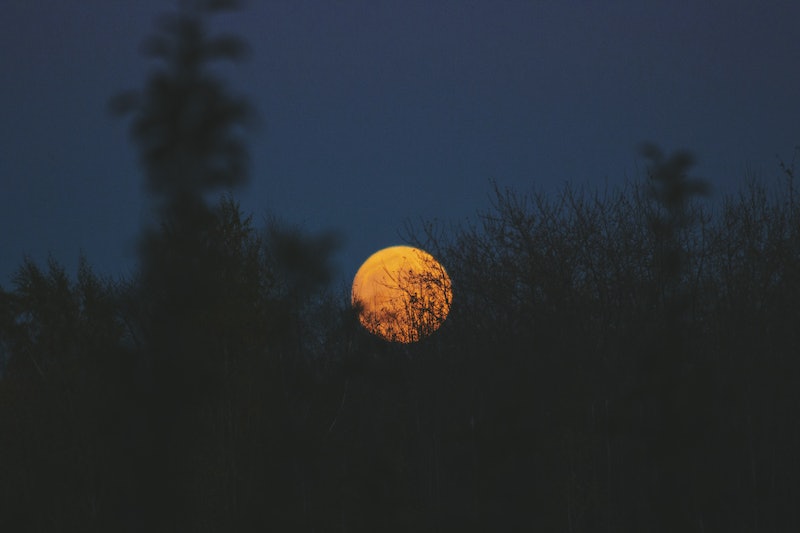 Before the Harvest Moon was immortalized in song by the great Neil Young, made famous in gamer culture as a Nintendo simulation role-playing game in the '90s, or written into countless novels as a symbol of the changing seasons, it was, well... just a full moon. Like most things co-opted into art and pop culture, the Harvest Moon was once no more than a fact of life — more specifically, a fixture in the sky. To get even more specific, it's one of the roughly 12 full moons we observe here on Earth over the course of the year. But why does it merit a name unto itself... and what sets it so far apart from the calendar's other full moons that it's worked its way into our cultural zeitgeist? After all, while other full moons have their own special names — August's full moon is known as the Sturgeon Moon and we call the last full moon of spring the Strawberry Moon — they simply don't have the same cache as the Harvest Moon.

According to EarthSky, the Harvest Moon is what we call the full moon that falls closest to the autumn equinox, which occurs when the sun crosses the equator in late September. The autumn equinox is also widely known as the first day of fall, and took place this year on Sept. 22. Since the full moon falling closest to that date begins on Oct. 5, the Harvest Moon for 2017 will be visible in the sky this month. An October Harvest Moon isn't always the norm, though — the cosmic event occurred in September in 2016, and it's predicted to do the same next year as well. It all depends on the lunar schedule and which full moon happens closest to that fall equinox. In fact, while this full moon is called the Harvest Moon because of the equinox, according to Almanac.com, the October full moon is usually called The Hunter's Moon.

Regardless of when exactly the Harvest Moon has made itself known in recent years, it takes its name from history. "[It] probably sprang to the lips of farmers throughout the Northern hemisphere, on autumn evenings, as the Harvest Moon aided in bringing in the crops," says the expert team at EarthSky.

While we often mourn the end of summer and the start of fall's shorter days because an earlier nightfall can hinder our commutes or limit the possibility of outdoor after-work happy hours, the autumn equinox posed a much more serious problem for farmers living in the years before electric light. Shorter days meant a shorter window for bringing in crops, which meant a decrease in earning power. Without the tractor lights and other agricultural technologies that growers have access to today, these farmers were forced to wrap up their harvest as soon as the sky grew dark and cut down on visibility.

Enter September or October's full moon (and cue the sound of a "Hallelujah!" chorus in the background). When the light from that full moon shone down on farmers and their crops around the time of the autumn equinox, they had more time to harvest their fields. As EarthSky notes, "the shorter-than-usual lag time between moonrises around the full Harvest Moon means no long period of darkness between sunset and moonrise for days in succession." Shorter periods of darkness were good for farmers, and so this early fall full moon earned its name.

You may not be looking to the Harvest Moon to help extend the length of your day working in the fields, but you may still notice some special characteristics of this month's full moon. For example, it tends to be easier to catch a glimpse of a full-looking moon near the horizon after sunset around this time of year than during other full moon periods. After the autumn equinox, the moon rises in the east relatively soon after sunset, making these sightings more common.

And while you may associate the Harvest Moon with an orange color or larger-than-usual size (thanks, most likely to myths and folklore), this full moon doesn't really look that different from those we see at other times of year. Due to the Harvest Moon's mystique, you simply may find yourself looking for it earlier than usual. According to EarthSky, any full moon spotted earlier in the evening will look bigger and more orange than usual because of its location near the horizon.

I hate to squelch those mental images you have of a beautifully orange, full Harvest Moon rising over a cozy, PSL-fueled October day. But, hey, at least now you understand the history.