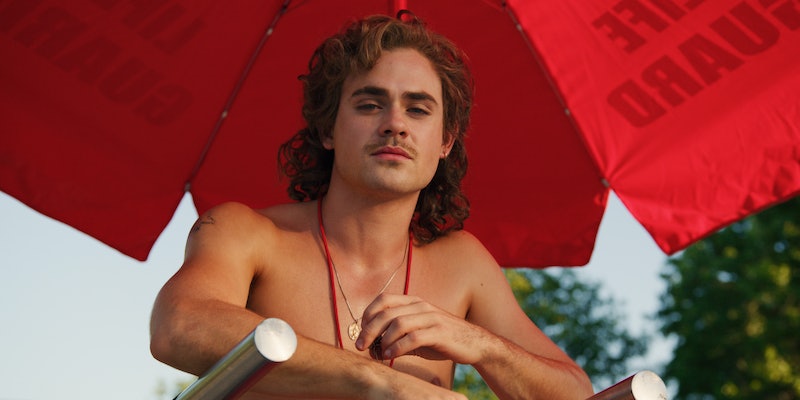 Spoilers ahead for Stranger Things 3. Stranger Things is never what you think it's going to be. When it debuted on Netflix, no one expected it to be quite as much of a hit as it has become. Its characters get to enjoy the same sort of surprises along the way, as the creators take viewers on an unexpected ride full of twists each episode. And one of the biggest surprises in Stranger Things 3 is Billy's final scene, in which he reveals himself not to be the evil '80s villain that his mullet and earring would lead you believe him to be.

"The thing that makes Billy interesting is that he's in a gray area, because we meet him and we see an antagonist, [but] we finally get to see a human by the end of the season," actor Dacre Montgomery tells Bustle about his character.

Billy's big moment in the end of the third season came when he defended Eleven against the monster he was being possessed by. To have the strength to stand up to the creature who was literally controlling his mind was unprecedented — and just another example of this show subverting some of the tropes it's built on. Billy's change of heart was about the last thing viewers expected in that moment, which made it all the more powerful.

"It takes the audience where they think they are going or want to go with Billy and then it smashes you around, and the whiplash from that throws you into the rest of my story arc, which is completely different," Montgomery says. It's an emotional scene with a great payoff, but he adds that actually filming it was even more emotionally exhausting.

"When I put her down on the ground, it was just so emotional," Montgomery says of shooting the scene in which Billy carries Eleven (Millie Bobby Brown) out to the monster. "We were screaming at each other and crying... we [were] just absolutely bawling our eyes out." As challenging and exhausting as it was, Montgomery called it "the most rewarding [scene] for the whole season."

Billy didn't just subvert villain stereotypes in Season 3. He also subverted the hot lifeguard/older woman trope that the show initially played into with Mike's mom Karen (Cara Buono). At first they were flirting, and they even planned a late night meetup. However, once Billy got possessed by the Mind Flayer, his attention was immediately diverted away from being a shirtless lifeguard crushing on a mom.

"I thought it was really good," Montgomery says of the writers' decision to subvert that stereotype. "I thought it was exactly the way that I had envisioned it. Like we take the audience on that version of the journey and then we whip them around into this other portion that is unsuspected."

That perfectly sums up everything that's happened to Billy in his two seasons on the show. He came in as an angry, surly teen, and left as someone who sacrificed himself for a fan-favorite character. Along the way, viewers learned more about what made Billy as angry as he was, and how he wasn't always that angry person. It was this journey that Montgomery was so excited to bring to life — particularly in that ending scene.

"I'm really not trying to play an archetypal bad guy. It's like, there's no such thing as good or bad. We're all human beings," Montgomery says. "I feel really fortunate they wrote me such an amazing role with a really interesting arc and amazing pay off at the end."

Billy's journey was filled with twists, turns, and writer-driven whiplash, but it landed in the best possible spot for a would-be villain. His legacy will now be so much more than that.

More like this
'Stranger Things' Finn Wolfhard Is “Proud” Of Noah Schnapp For Coming Out
By Sophie McEvoy
'The Queen’s Gambit' Season 2 Tweet Wasn’t From Anya Taylor-Joy
By Mary Kate McGrath, Jack Irvin and Grace Wehniainen
Netflix Shut Down 'Bridgerton' S3 Rumours About A “Very Dark” Storyline
By Bustle
'The Last Of Us' Episode Schedule Competes With The Super Bowl & Oscars
By Brad Witter
Get Even More From Bustle — Sign Up For The Newsletter
From hair trends to relationship advice, our daily newsletter has everything you need to sound like a person who’s on TikTok, even if you aren’t.