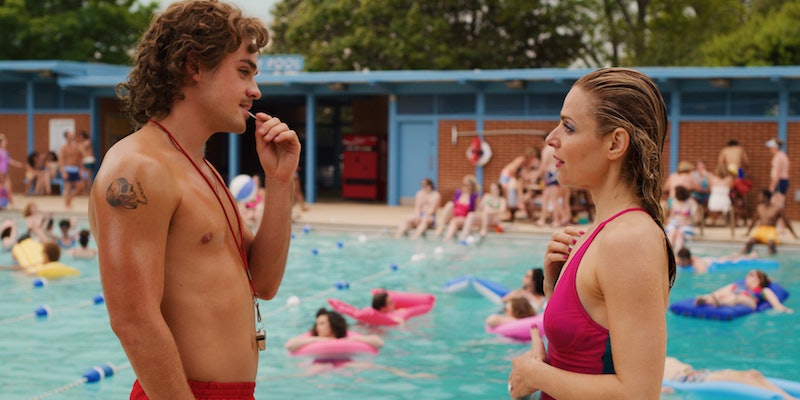 If Mrs. Wheeler's decision that Billy looked like the model on the cover of a romance novel wasn't enough, it looks like her friends are leaning in to his attractiveness, too. The new Stranger Things 3 clip shows Mike and Nancy's mom, along with her friends, at the pool watching Billy as he walks over to the lifeguard chair.

The whole thing is pretty uncomfortable — these are grown women lusting after a high school student — but the scene is definitely over-the-top. And Billy seems to enjoy being the center of attention, as he walks in slow-mo over to his lifeguard perch.

Aside from the general thirst of the trailer, it also hints that Billy will be a bigger character in Season 3. The anger-fueled teen joined the show last season, when he and his stepsister Max moved to Hawkins.

Billy hasn't been a huge part of the show so far — he's mostly just been an object of desire for Mrs. Wheeler and a bully to his step-sibling. For some reason (likely racism), Billy staunchly opposed Max's friendship with Lucas, often yelling at her for spending time with him. But it looks like his Season 3 arc will go beyond that, with Billy taking on a local job and interacting with his fellow teens.

There are also new posters for the Netflix series, including this one, featuring the apparent teen heartthrob.

Some of the other new posters include couple names for the show's characters. Nancy and Jonathan have become "Jancy," so it looks like their relationship is still going strong.

And Hopper and Joyce — who haven't actually started dating yet, what with Bob's death, but come on, you know they'll get there — are "Jopper."

Back to Billy, though: Some fan theories suggest that the bigger role he'll have in the new episodes include him turning into an actual monster. When Stranger Things' original Season 3 trailer came out in March, PopSugar editor Quinn Keaney proposed that Steve or Billy might turn into the monster.

There's a shot of Steve being injected with something, as well as a scary-looking, muscular red monster. Billy then has a bloody red spot on his arm that seems to resemble the monster's vein-like appearance. And the new trailer, while lighthearted, also focuses on Billy's appearance, which could be a callback to how weirdly ripped the new Stranger Things monster is.

Fans will have to wait until July 4, when the new season hits Netflix, to find out what's really up with Billy. I mean, hopefully he won't actually hook up with Mrs. Wheeler, but his potential connection to the new monster is even more ominous. There's another theory that Billy is hallucinating his arm injury — less scary for everyone else, but disturbing nonetheless. And even if he's not an actual monster, he's still not the nicest guy.

Whatever Stranger Things 3 has in store, it's safe to say the Hawkins residents won't be catching a break anytime soon. The local pool and the Starcourt Mall might seem like harmless places to have some summer fun, but it's hard to relax when there are constantly monsters on the loose. And one of them may or may not be sitting on the lifeguard chair.