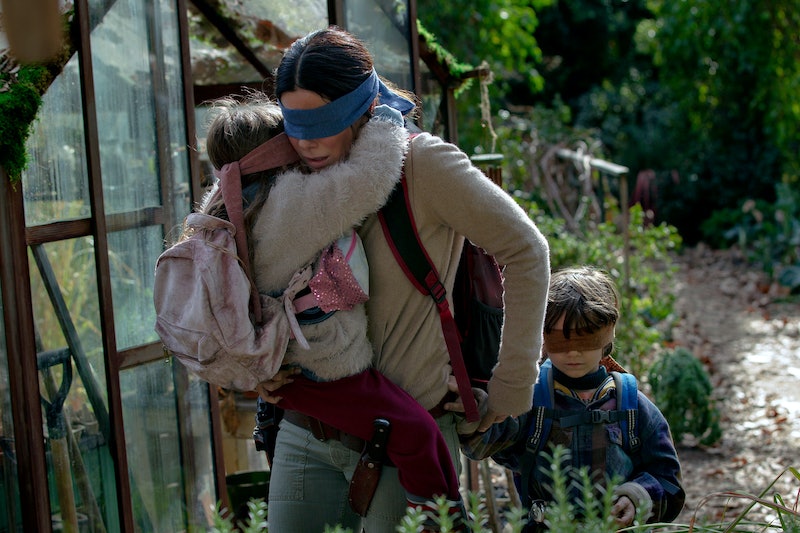 It's a horror movie rule that the less you show your monster, the more terrifying it becomes in the audience's mind. Aliens, Jaws, and Cloverfield all held back on revealing their creatures for big debuts and bigger scares, resulting in some indelible movie moments. But what if you can't show your creature? Susanne Bier, director of Netflix's Bird Box, turned a problem (and major plot point) into one of the movie's biggest strengths.

The film flips back and forth from the immediate aftermath of a terrifying invasion and the post-apocalyptic status quo further down the line. Something around the world is causing people to become violently suicidal. When it hits her town, single, pregnant artist Malorie (Sandra Bullock) takes refuge in a house with other survivors, and they quickly realize the problem is sight. The survivors learn to move through a world where a glance can literally kill you. Eventually, Malorie has to prepare herself and her children for a dangerous, blindfolded trip to what they hope will be sanctuary.

Bier gives the audience a sense of what Malorie is up against using first-person POV shots of her trying to protect herself and her family wearing a necessary blindfold.

"Because it’s so much Malorie’s story, because [the film] plays so much with the whole notion of ‘she can’t see,’ I thought it was really important to stay with her emotionally and to understand what it is she’s not seeing," the director explains, speaking over the phone.

The shots are claustrophobic, the fabric allowing just light and shadow to filter through; flickering darkness indicating that one of the creatures has darted by. The sound design creates an impression of being surrounded without any sense of space or depth.

But there's more than cinematic illusion to the way the movie helps you understand and experience Malorie's plight. Bullock went all in on learning how to maneuver without her sight. "She had... someone who teaches blind people how to navigate spaces, so she had learned some techniques that blind people use, in order to kind of approach sound, find out where there’s walls or how distances play out," Bier says. "But she was blindfolded and she was literally navigating the very real world."

Did the director herself give it a try too? "Eh, I tried the blindfold but I didn’t study it the way she did," Bier recalls with a laugh. "And also I was sort of maneuvering the crew and directing the movie, so I feel that doing that blindfolded would have probably…not been the best solution."

T.S. Eliot claimed he could show you fear in a handful of dust, but Bier doesn't even need that. The creatures' physical presence is no more than wind gusts blowing. Since she can't show them to us, what truly establishes them is their sound — a horrifying screech combined with voices stolen from loved ones, echoing in the heads of their would-be victims.

"The whole use of sound is... it’s incredibly important. And very much carries a huge part of the emotional storytelling," says Bier. "Having creatures which are mainly composed of invisible things puts a big pressure on the sound to be very distinct. The creatures mess with your mind, and they play into your deepest fear, so the sound had to be suggestive of that." She explains that the noise the creatures make is "actually composed of a whole lot of different things," estimating that it's about 30 different tracks laid over one another. (Ben Barker is the film's sound designer and supervising sound editor.)

Half the film is given over to Malorie and the children's blind river run, a frightening physical feat that Bier says was rooted in some of her own fears. The rapids, she says, she found "really terrifying." The sequence involves Malorie and her two small charges negotiating a rough stretch of water, and it looks completely realistic. "I mean, it wasn’t dangerous, it’s set up in a way that it’s not dangerous," Bier says. But it was still "daunting" for the director to tackle.

Despite the action and terror inherent in the story, Bier's focus is ultimately on the relationships between the people caught up in it, and how they react when faced with difficult and frightening choices. Bier hopes that's ultimately what sticks with viewers.

"I kind of hope that they want to talk about Malorie," she says, "and about what happens afterwards."

More like this
Here’s Everything Coming To & Leaving Netflix In February
By Jake Viswanath
Twitter Is Mad At The Razzie Awards For Nominating A Child For Worst Actress
By Radhika Menon
'That '90s Show' Star Callie Haverda Got Advice From Mila Kunis & Ashton Kutcher
By Brad Witter
Keke Palmer Shares The Sex Of Her & Darius Jackson's Baby
By Jake Viswanath
Get Even More From Bustle — Sign Up For The Newsletter
From hair trends to relationship advice, our daily newsletter has everything you need to sound like a person who’s on TikTok, even if you aren’t.