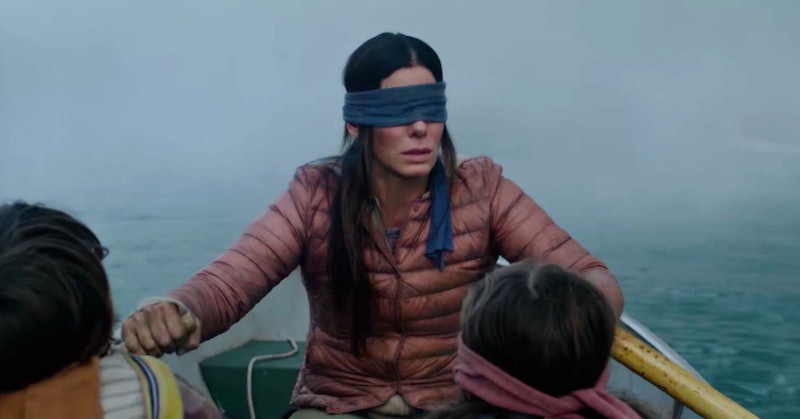 The unknown is the most terrifying element the human mind can face — the nameless unseen creating a void we can only comprehend by filling it with our worst fears, every awful outcome a possibility when nothing is certain. It's the main rule of horror: Anything a writer or filmmaker could throw at the audience has nothing on forcing them back into their own minds. So when the upcoming post-apocalyptic Netflix film makes the abstract "worst fear" the enemy, how scary Bird Box is depends on your own deep-rooted anxieties. Spoilers ahead.

At first the film, which comes out Dec. 21, seems a standard apocalypse narrative. There's The Event (here called "The Problem"), usually a contagion with disastrous effects, a natural plague, or world-destroying monster(s). Then there's the Flight To Safety, Surviving, and Aftermath. Normally the first part of the film is concerned with watching the mystery unfold. What's causing what seem like individual incidents? What's the unifying element when they're revealed to be a global event? Bird Box answers the question with a frightening non-answer: The only thing people have to fear is fear itself.

There are creatures, but they're not directly the problem. On seeing them, people personally witness something so awful they're almost instantly driven homicidally and suicidally insane. Bullock plays Malorie Shannon, a woman pregnant around the first reported incidents of The Problem. She gives birth and begins raising her children in a safe house, papered completely over to avoid any accidental glimpses of the creatures.

Being a parent is frightening enough, but having to protect children in a world where fear will literally kill you on sight is a level of intensity and responsibility few would want, especially considering how prone children are to phobias and fears in a world they're just learning to understand.

The horrifying idea our own minds could turn against us is usually the arena of psychological thrillers, where hovering doubt about reliability creates tension. in Bird Box it's a fact of life — if you see these creatures, you will react, the millions of years of adaptation and evolution designed to ensure human survival exploited to deadly end. Malorie understands the immediate and so far, best solution: Don't look. But when she and her children have to flee to safety it's easier said than done. Anyone who's attempted to walk through their own rooms without turning on a light, slamming into a table, or tripping over a couch, has just a taste of what eliminating one of our most relied-upon senses can cost. Malorie has to navigate sight mostly unseen down a river with two kids, and yet the most terrifying part is the one juncture she'll have to navigate by sight.

There's an interesting philosophical question posed by Bird Box that the film answers somewhat directly: Would there be anyone who could stand to look upon these creatures and survive? And how is what they're seeing different than what the masses do? It's the question that will haunt the minds of viewers long after watching Bird Box, forcing them to dwell on the most frightening elements of their own thoughts, scarier than any movie could aspire to.

More like this
The Razzies Set Age Limit After Backlash For Nominating A Child For Worst Actress
By Radhika Menon
Here’s Everything Coming To & Leaving Netflix In February
By Jake Viswanath
What Is Mary J. Blige’s Net Worth? The 9-Time Grammy Winner Is Doing “Just Fine”
By Hugh McIntyre
Taylor Lautner Copped To Finding Jacob "A Little Annoying" In Twilight
By Stephanie Topacio Long
Get Even More From Bustle — Sign Up For The Newsletter
From hair trends to relationship advice, our daily newsletter has everything you need to sound like a person who’s on TikTok, even if you aren’t.