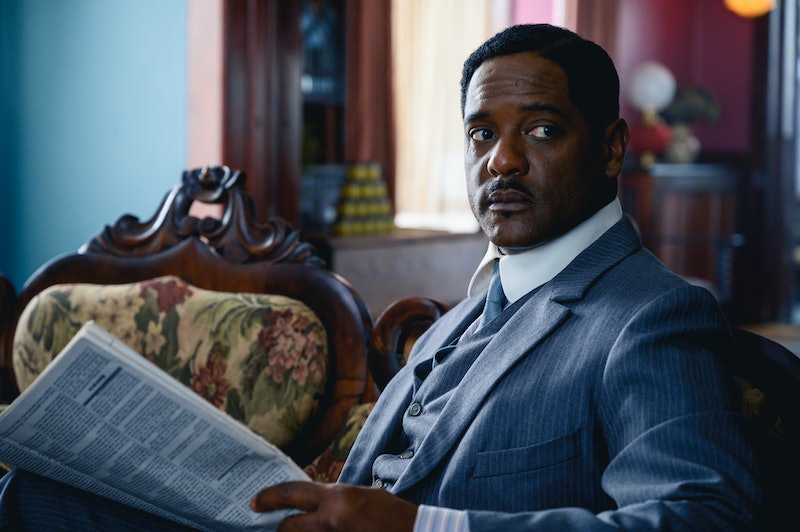 Self Made tells the remarkable true story of Sarah Breedlove, aka Madam C.J. Walker, a hair culturist and entrepreneur who build a cosmetics empire in the early 1900s. One figure who looms large in Walker's story is her husband C.J. Walker, played by Blair Underwood in the show. Underwood's Self Made character differs from his real life counterpart in some key ways, and Self Made does take liberties with its source material, the On Her Own Ground biography written by Walker’s descendant A’Lelia Bundles.

When did Madam Walker meet C.J.?

In Self Made, Addie (Annie Turnbo in real life) comes to Sarah's rescue after her abusive husband storms out. After Addie rehabilitates Sarah's hair and gives her some newfound confidence, Sarah meets the more well-to-do C.J. Walker.

In real life, Bundles wrote that that Sarah started "quietly seeing" Walker "as early as the fall of 1902" when she was actually still in an unhappy marriage and living in St. Louis with John Davis, the prior husband portrayed in Self Made. Walker lived within walking distance.

Considering colorism is a major theme of Self Made, one noticeable change is that Self Made cast a darker-skinned actor to play C.J. Walker. In reality, acquaintances described him as "what you would call yellow," meaning he had a light complexion.

C.J. Walker was an ad man

Self Made does accurately portray C.J. Walker as working in advertising. He was listed in the 1900 St. Louis city directory as a newsman; Bundles surmised that he likely sold subscriptions and advertising, and may even have done some reporting for one of St. Louis' black newspapers like The Clarion. According to Bundles, Walker was a "boaster, charmer, and self-promoter," perhaps all honed by working at a barbershop and saloon. Bundles said that calling Walker a "mere huckster" would be too simplistic, but he clearly had a knack for business that sometimes crossed the line into scams.

Because Self Made skips over their time in Denver, you never see that for a time, Madam Walker and C.J. made a formidable team, and C.J. really did help grow the business. C.J. worked in both real estate and entertainment in Denver, and threw festivals and events that directed customers to Madam Walker.

"The Walker husband-and-wife partnership appeared to be flourishing, with one's individual pursuits reinforcing the others," wrote Bundles.

After Denver, the Walkers started a "mail order business" and traveled all over the states for 18 months. When they realized their business was expanding too quickly for them to handle on the road, they set up headquarters in Pittsburgh in 1907, then Indianapolis in 1910.

This is around when C.J. struggled to keep up with Madam Walker's vision. He tried to make scammy knock-off health remedies like Walker's Sore Wash and Walker's Rheumatic Cure, for example, but they all used ingredients the FDA had banned.

In Self Made, C.J. Walker's great flaw was infidelity, but in real life it was that and financial irresponsibility. C.J. Walker has a lovable dad in Self Made who talks to Sarah about C.J.'s numerous shortcomings. In real life, that person was C.J.'s younger sister, Peggie Prosser.

Prosser, who C.J. abandoned for 16 years after their mom died, came to Madam Walker in 1910 with concerns that C.J. was squandering company funds. She told Madam Walker that C.J. was "meeting the postman, getting the mail" but "not filling orders."

Later, it became increasingly clear that he was mismanaging company funds, and spending an exorbitant amount of money on fancy cars, clothes, and other women.

He did. After five years of marriage, the Walkers were richer than ever, but Bundles described their marriage as more "business arrangement than affectionate alliance." C.J. Walker was on the road growing the business in various cities more than he was at home, and as a result his eyes wandered. His first recorded affair was with a woman named Louise in Kansas City, Missouri.

As Self Made shows, he also had an affair with Dora Larrie, but they met up in Birmingham, Alabama while Madam Walker was in Mississippi. Larrie apparently promised the "gullible C.J." that if he married her instead, he would be "the master of the situation" and not feel emasculated like he did with Madam Walker.

After they eventually married, Dora Larrie ended up doing the exact opposite. In a letter to the Freeman newspaper, C.J. lamented that Larrie only wanted the title of "Madam Walker" and Sarah's formula. Larrie actually had C.J. arrested for "interfering with her business" and "tied up what little mail there was coming in" so C.J. got no money. All she gave him was "10 cents on Sunday for a paper and shoe shine."

The adultery and C.J.'s financial woes were too much for Madam Walker, and with the help of her lawyer Ransom, they served up divorce papers. After C.J. failed to even appear before the judge in October 1912, the divorce was made final.

Unlike in Self Made, Madam Walker did not waffle about divorcing C.J., and acted rather swiftly. She did not sleep with him one final time, though C.J. did beg Madam Walker countless times after that to take him back, or to send him money. Peggie Prosser always warned Madam Walker about what her brother was up to — like trying to start a new business with a new woman, whether it be Larrie or someone else — and Madam Walker always remained unmoved.

Ultimately, Madam Walker went on to become a household name, while the husband who gave her said title faded into anonymity.

More like this
The Mysterious Gunther Corporation From 'Gunther’s Millions' Has Dissolved
By Brad Witter
'That '90s Show' Is Officially Coming Back For Season 2
By Gretchen Smail and Grace Wehniainen
The 'Freeridge' Cast Shared Their Hopes For A Potential Season 2
By Grace Wehniainen
You Might Want To Rewatch This Key 'On My Block' Scene To Understand 'Freeridge'
By Grace Wehniainen
Get Even More From Bustle — Sign Up For The Newsletter
From hair trends to relationship advice, our daily newsletter has everything you need to sound like a person who’s on TikTok, even if you aren’t.